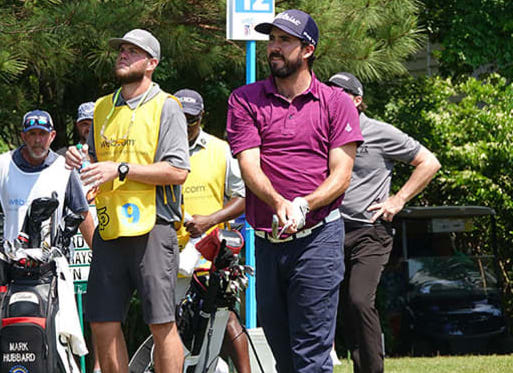 Denver native Mark Hubbard won a tournament on the Web.com Tour in February, and he has a good opportunity to chalk up victory No. 2 of 2019 on Sunday.

Remarkably, the 29-year-old has gone through the first three rounds of the Web’s Knoxville Open in Tennesse without making a bogey. There have been 13 birdies, and the rest pars.

Hubbard, who played three straight seasons on the PGA Tour before losing his card at the end of 2017, backed up consecutive rounds of 6-under-par 65 with a 1-under 70 on Saturday, leaving him at 13-under 200 overall. After leading going into the weekend, he shares second place after Saturday, trailing leader Robby Shelton by two.

With a good showing on Sunday, Hubbard (pictured in a Web.com Tour photo) can move closer to assuring himself a top-25 showing on the Web’s final regular-season points list for 2019, which would earn him his PGA Tour card for the 2019-20 wraparound season.

— Part-time Colorado resident Hollis Stacy shot her best score of the week — a 3-over-par 74 — and moved up into a tied for 24th place after Saturday’s third round of the U.S. Senior Women’s Open at Pine Needles in Southern Pines, N.C.

— Former Colorado School of Mines golfer Marty Jertson, who made the first PGA Tour cut of his career on Friday, couldn’t build on the momentum on Saturday at the PGA Championship at Bethpage Black in Farmingdale, N.Y.

The 2001 CGA Amateur champion, who was the low PGA “club pro” after two rounds, struggled to a 9-over-par 79, which dropped him 41 places on the scoreboard, to 77th place.

After posting two double bogeys, six birdies and a birdie on Saturday, Jertson sits at 10-over-par 220. He’s third out of the three PGA club pros who made the cut, four strokes behind Ryan Vermeer and two back of Rob Labritz.

After rounds of 73-73-69, which leaves her at 1-under-par 215, Givens trails leader Caroline Hedwall by three.

The former Air Force Academy golfer, who won a PTLA tournament three weeks ago, eagled his final hole on Saturday and holds down fourth place going into Sunday’s final round of the BMW Jamaica Classic.

Whitney’s 6-under-par 66 on Saturday left him at 16-under 200 and four strokes behind leader and fellow American Evan Harmeling, who completed 16 holes on Saturday before play was called due to darkness.