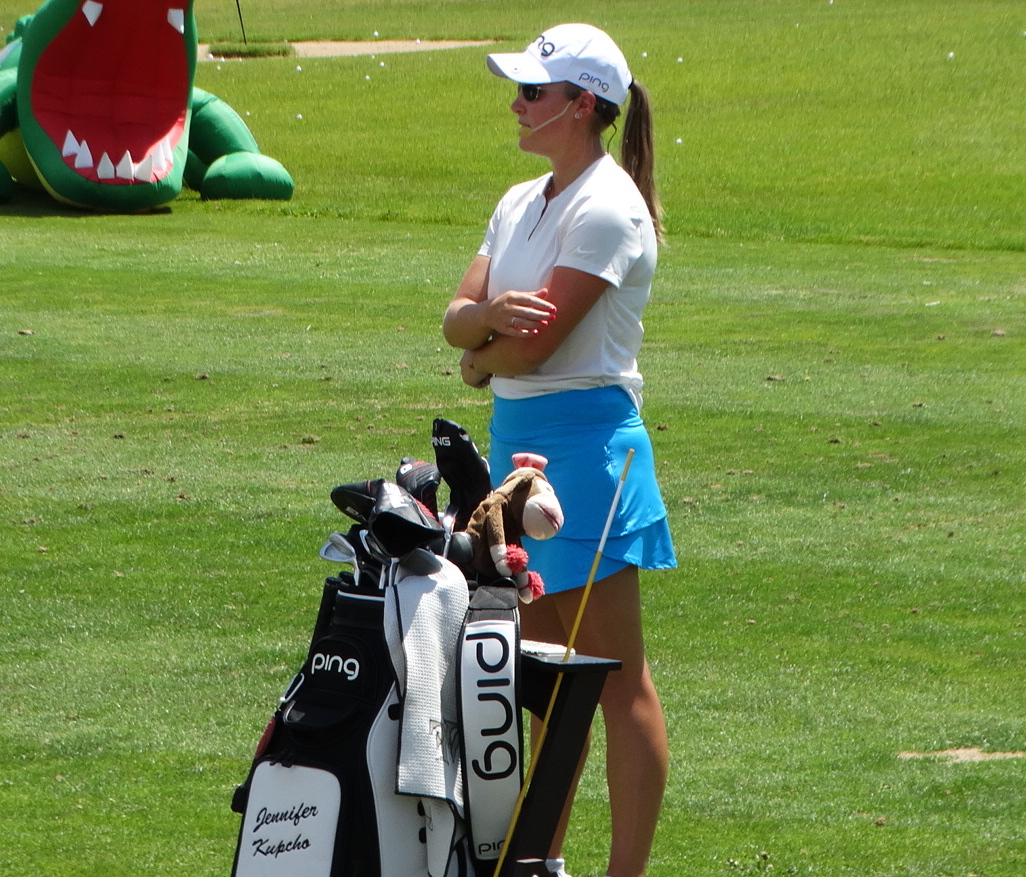 Jennifer Kupcho was the last player to get into the field, based on 2019 money-list standings, for the Evian Championship, one of the LPGA Tour’s majors.

And the Wesminster resident took advantage of the opportunity presented her for the tournament in Evian-les-Bains, France.

Just two months into her pro career, Kupcho (pictured above) showed again that’s she’s oh so ready for the biggest stages in women’s golf — professionally, just as she was on the amateur level.

On Sunday, Kupcho shot a bogey-free 5-under-par 66 to tie for second in the Evian, playing her final four holes in 3 under. It was the best showing of her young LPGA Tour career, but her second straight top-five in non-team events.

Perhaps more importantly, the performance leaves no doubt that Kupcho will remain fully exempt on the LPGA Tour in 2020. The 2019 Augusta Women’s Amateur champion and former top-ranked amateur in women’s golf earned $290,778 on Sunday, which vaulted her into 34th place on the 2019 money list with $380,237. And that’s in just eight tournaments as the Coloradan deferred accepting her LPGA Tour card until completing her senior season at Wake Forest.

To put that into perspective, among the players Kupcho is ahead of on the money list are Lydia Ko (37th), Stacy Lewis (39th), Cristie Kerr (68th), Paula Creamer (72nd) and Kupcho’s friend Maria Fassi (81st).

“It’s crazy,” Kupcho said. “I definitely played really well this week, and it’s exciting to see that I can compete where my game is right now. I’m excited for the rest of the season.”

At the Evian, Kupcho finished at 13-under-par 271, two strokes behind champion Jin Young Ko of South Korea, who closed with a 67.

“I was just out there having fun,” Kupcho said. “Coming into the day obviously I was a long ways back, and I was just like, I’m going to go play well. I play really well in the rain so I wasn’t worried about it. I came out and played really well.”

— Former Colorado State University golfer Martin Laird has almost assured himself of keeping fully-exempt status on the PGA Tour after tying for seventh on Sunday in the second-to-last tournament of the regular season, the Barracuda Championship in Reno, Nev.

It was Laird’s second consecutive top-10 on tour, coming a week after placing sixth at the Barbasol Championship. Laird now stands 116th on the FedExCup point standings, with the top 125 after next week qualifying for the playoffs.

At the Barracuda Championship, which uses a Stableford format where a birdie and a bogey are worth more than two pars, Laird finished with 37 points, ending up 10 behind champion Collin Morikawa.

Laird made five birdies and one bogey in the final round.

— Former Golden resident Andrew Svoboda finished second on the Korn Ferry Tour’s Price Cutter Charity Championship in Springfield, Mo., marking his best showing on that circuit since winning for the third time in his career in April 2016.

Svoboda, in just his ninth Korn Ferry start of the year, shot rounds of 68-67-65-68 for a 20-under-par total of 268, which left him two strokes behind champion Harry Higgs. Svoboda made an eagle, three birdies and a bogey on Sunday.

— Former University of Colorado golfer Jenny Coleman continued her stellar play on the Symetra Tour by tying for fifth on Sunday in the CDPHP Open in Albany, N.Y.

In her last eight Symetra starts, Coleman has a second-place showing, three thirds and a fifth.

The former Buff has moved up to seventh place on the season-long money list with $61,350. At season’s end, the top 10 finishers on that list will be awarded LPGA Tour cards for 2020.