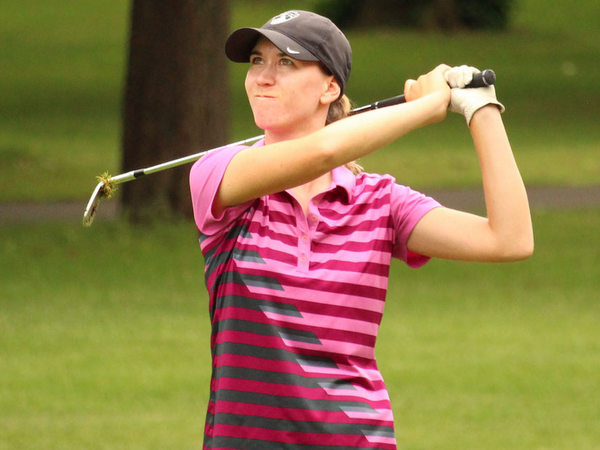 It’s been a stellar last couple of weeks on the Symetra Tour for former University of Colorado golfer Jenny Coleman.

She hasn’t notched a victory, but she’s made considerable inroads with back-to-back third-place finishes on the Symetra circuit.

A week after tying for third at the Valley Forge Invitational, Coleman (pictured) did likewise on Sunday at the Four Winds Invitational in South Bend, Ind.

She went 68-73-69 for a 6-under-par 210 total, which left her three strokes behind champion Perrine Delacour. Coleman went bogey-free in the final round.

Over her last six official rounds on the Symetra Tour, Coleman’s stroke average has been 68.5.

Coleman had LPGA Tour status in 2017.

Elsewhere in major tour golf and other events for local players:

— Denver native Mark Hubbard is further solidying his status as one of the 25 Web.com Tour players who will earn 2019-20 PGA Tour cards through their performance during the regular season. Hubbard tied for 15th place on Sunday at the BMW Charity Pro-Am in Greer, S.C., marking his sixth top-20 of the season, including one win.

In the weather-shortened BMW event, Hubbard went 69-67-65 for a 13-under-par 201 total, which left him eight strokes behind winner Rhein Gibson. Hubbard remains sixth on the 2019 Web.com Tour regular-season points list.

— After making her second cut in two LPGA Tour starts this season, Jennifer Kupcho of Westminster finished 43rd in the Shoprite LPGA Classic in Galloway, N.J. Kupcho carded scores of 70-70-73 for an even-par 213 total.

The former University of Colorado golfer shot rounds of 65-69 for a 134 total, one stroke better than former CGA Player of the Year Steven Kupcho (68-67). Other locals in the top five were fellow former University of Northern Colorado player Conner Barr (third at 139) and former CU golfers Derek Tolan and Ben Portie (fifth at 140).