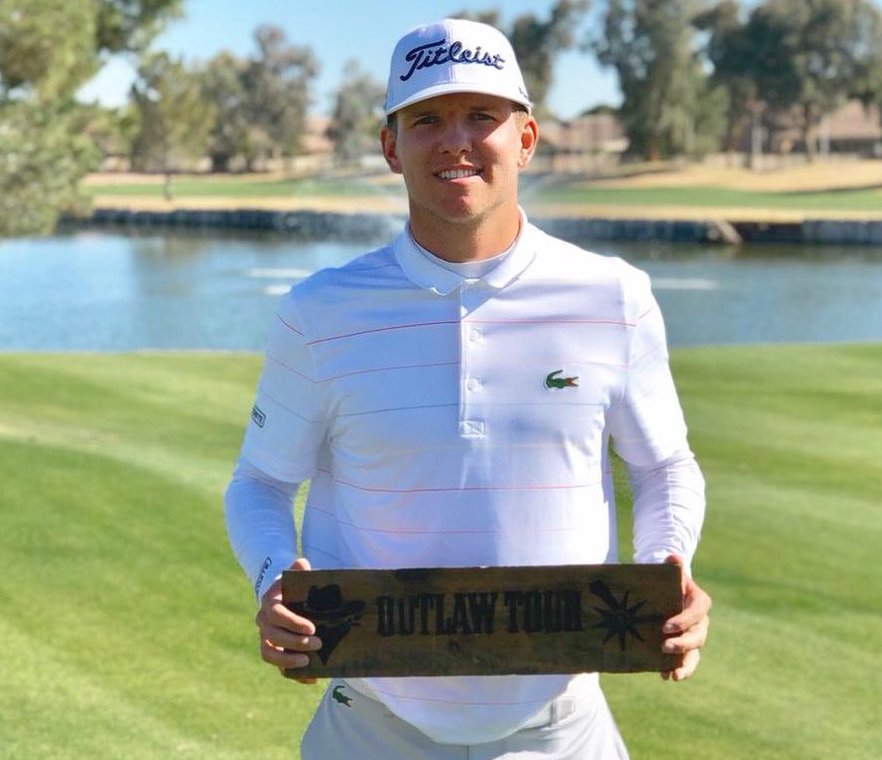 If it’s not one Paul, it’s another.

It’s been a stellar mini-tour run in Arizona this year for the Paul twins from Germany, both of whom were standout golfers at the University of Colorado.

In his last five starts on the Outlaw Tour, Jeremy Paul has notched three victories, a second place and a fourth on Thursday at the Western Skies Classic in Gilbert, Ariz. In his last 11 rounds on the Outlaw circuit, he’s a remarkable 70 under par.

As for his brother Yannik Paul (pictured), he’s had a very nice 2019, but hadn’t earned his first pro victory — until Thursday, that is. After earlier rounds of 66-70, Yannik closed with a 9-under-par 61, then beat Elliott Paylor on the first playoff hole to earn pro victory No. 1. It came with a $6,000 payday at the Western Skies Classic, which featured a 63-man field.

“First W as a professional. Thanks @outlawgolftour for a great event. #moretocome,” Paul said on Twitter.

But Yannik Paul had been knocking on the door for a while as he finished twice last month in Dreamchasers Tour events — including once in a playoff — and posted a fourth place earlier on the Outlaw Tour.

— Former Fort Collins resident Tom Whitney tied for ninth on Saturday in Alexandria, La., in the Coke Dr. Pepper Open, the 2019 season opener for the All Pro Tour. The former Air Force Academy golfer recorded rounds of 66-68-68-70 for a 16-under-par 272 total, which left him 10 strokes behind champion Justin Lower of Uniontown, Ohio. A total of roughly 170 players competed in the event.

— AJ Morris of Aspen scored a couple of top-11 finishes this week on the West Florida Golf Tour. On Monday, he placed fourth out of 24 players, earning $225, at Countryside Country Club, shooting a 72 and finishing four strokes behind champion Landon Michelson of Miami. Then on Friday, Morris ended up 11th out of 35 players at Lakewood Ranch Country Club with a 4-under-par 68, which left him three strokes behind winner Michael VanDeventer of Columbus, Ind. Morris earned $215 for that performance.