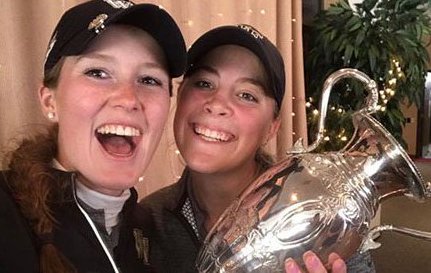 Jennifer Kupcho may reach double digits in individual college victories after all.

After going much of her senior season at Wake Forest without an individual win, the Westminster resident has captured two titles in the last half of March. That gives her a remarkable nine for her career, with probably three tournaments left — the ACC Championship, NCAA regionals and NCAA finals. Kupcho won two of those three events last year — both the NCAA regional and national titles.

To finish up her regular-season college career, Kupcho shared the individual title on Sunday at the Bryan National Collegiate in Browns Summit, N.C., with her Wake Forest teammate Emilia Migliaccio. Not surprisingly, the Demon Deacons claimed the team title with an exclamation point — by a whopping 32 strokes with a 34-under total. That’s two straight team wins and two consecutive program records for 54-hole team totals. In fact, 34 under set an ACC record. (Kupcho is pictured above, at right, with Migliaccio.)

Kupcho fired three consecutive rounds of 4-under-par 68, leaving her at 12-under 204 with Migliaccio, who also closed with 68. Kupcho, the No. 1-ranked women’s amateur in the world, made five birdies and one bogey in Sunday’s final round, and 14 birdies and two bogeys for the tournament. She’s now posted six consecutive rounds in the 60s, giving her 34 for her career, which matches the NCAA record set by Alabama’s Lauren Stephenson.

Next up for the reigning NCAA Division I individual champion is the inaugural Augusta National Women’s Amateur, which begins on Wednesday in Georgia.

Elsewhere in local NCAA Division I golf this weekend:

— Univerity of Denver junior Mary Weinstein posted her third top-10 showing in major tournaments this season by tying for 10th on Sunday at the ASU Ping Invitational in Phoenix.

The two-time CGA Women’s Player of the Year fired a 1-under-par 71 in the final round to come in at 2-under 214, five strokes behind co-champions Bethany Wu of UCLA, Stephanie Lau of Northwestern and Andrea Lee of Stanford.

In the team standings, DU placed 11th in the 14-school field, while the University of Colorado finished 13th. The Buffs were led by Kirsty Hodgkins, who ended up 29th individually at 220.

— CU junior Daniel O’Loughlin recorded his sixth top-10 individual finish of the season on Saturday as he shared ninth place on Saturday in The Goodwin tournament in Stanford, Calif.

O’Loughlin, who birdied his final two holes of the tournament, went 67-74-70 for a 1-over-par 211 total, which left him five strokes back of champion Brandon Wu of Stanford.