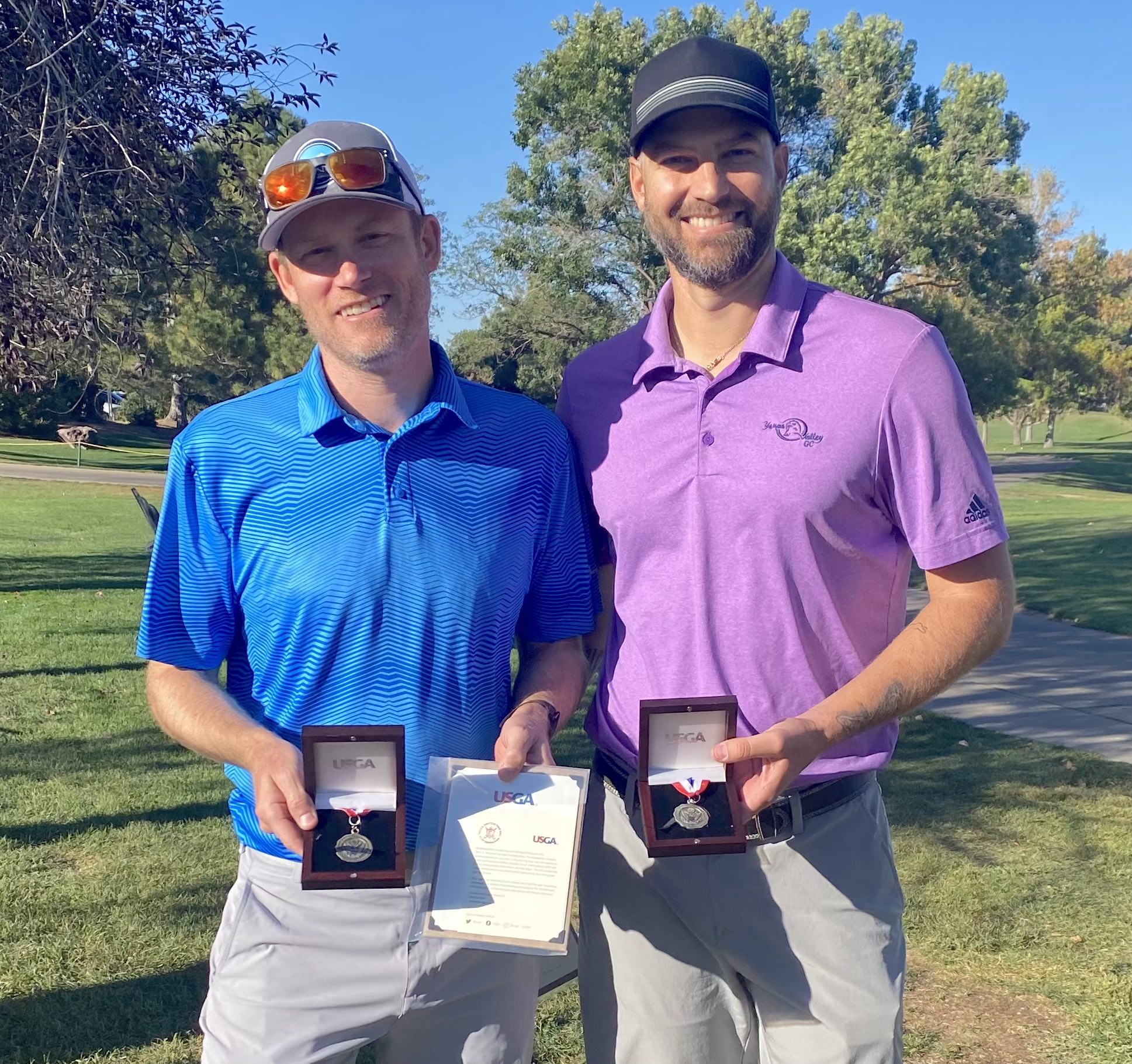 Chris Thayer (left) and Bryan Rusin fired a better-ball 62 on Tuesday at The Club at Inverness.

CGA Four-Ball victories are proving to be precursors to success in U.S. Amateur Four-Ball qualifying — at least if Tuesday was any indication.

U.S. Four-Ball qualifying was held Tuesday at The Club at Inverness in Englewood, and two of the three teams that punched their tickets to the 2022 national championship happened to be the last two winners of the CGA Four-Ball.

Chris Thayer of Golden and Bryan Rusin of Denver, both 41, earned medalist honors on Tuesday, roughly five months after capturing the CGA Four-Ball title together with a record scoring total for the event. And tying for second place on Tuesday were Charlie Soule and Charlie Sahlman, both of Denver, who claimed victory in the the 2020 CGA Four-Ball.

Joining those two teams in advancing to the 2022 U.S. Amateur Four-Ball — set for May 14-18 at the Country Club of Birmingham in Alabama — were Stephen Reed of Lakewood and fellow Coloradan Michael Urbatchka of Louisville.

Thayer and Rusin birdied their last three holes and shot a better-ball score of 8-under-par 62. Soule and Sahlman fired a 63, as did Reed and Urbatchka.

“It’ll be awesome to do (the national championship) with Bryan,” said Thayer, a three-time CGA Mid-Amateur champion. “We’ve had a lot of success and a lot of fun playing together and pushing each other. To take it to the national level will be a new thing for us and will be a lot of fun. It’s something I’ve really wanted to play in. We’ll try to soak it all in.”

Thayer and Rusin were Big 10 golf opponents in college — Thayer at Northwestern and Rusin at Illinois — though they don’t remember directly crossing paths at the time. But they connected at the 2017 CGA Mid-Amateur in Keystone that Thayer won and have been friends and occasional golf partners ever since.

While Thayer has competed in four previous USGA championships — though never a Four-Ball — this will be Rusin’s first.

“It feels great,” said Rusin, a high school teacher in Denver. “I know Chris has played in some USGA events. Unfortunately with my teaching schedule, I haven’t really been able to play in qualifiers for the last 10-15 years, so I’m super ecstatic to be playing. And not only playing, but with someone who’s a good friend of mine and playing a great course in Birmingham. I’m really excited.”

Rusin won the Chicago Amateur twice and was the Illinois state amateur runner-up in 2000. And this year, in addition to winning the CGA Four-Ball with Thayer, Rusin captured the CGA Western Chapter title.

On Tuesday, Rusin and Thayer finished with nine better-ball birdies (five by Rusin, four by Thayer) to go along with one bogey. Down the stretch, Rusin sank birdie putts of 8 feet on 16 and 15 feet on 17, while Thayer capped things off with a 12-foot birdie on No. 18.

“Bryan was really pushing to birdie the last three,” Thayer said. “I thought 7 (under) is a good number and (qualified) last year, but you never know in these things. You just want to make as many birdies as possible. I was thinking in my head, ‘Three would be nice, but two out of the three would be great.’ We wanted a few closer opportunities, but we made the putts in the end, and that’s all that matters.”

Meanwhile, Soule and Sahlman started slowly — they were even par through five holes — but went 7 under par from holes 6 through 15 before parring the last three. For the day, they chalked up seven better-ball birdies and never carded anything worse than a par.

A year after winning the CGA Four-Ball in 2020, Soule and Sahlman finished second this year, albeit seven strokes behind Rusin and Thayer. Soule is a former University of Denver golfer who had four top-10 showings in the Colorado Open from 2005 through ’15.

As for Reed and Urbatchka, they sprinkled their birdies pretty evenly throughout their round, making eight to go along with one better-ball bogey.

In all, 54 two-person teams entered the qualifier at Inverness, which also hosted a U.S. Four-Ball qualifier last year.

Meanwhile, a pair of Coloradans who competed in the 2021 U.S. Amateur Four-Ball qualified out of state for the 2022 national championship. Tyler Bishop of Frederick and Ryan Burke of Longmont gained the second of two spots available in Santa Fe, N.M., on Sept. 27. They shot an 8-under-par 64 and prevailed in a three-team playoff for the final available berth. Bishop and Burke also qualified via a playoff a year ago.

At Par-70 The Club at Inverness in Englewood

For all the scores from Tuesday’s qualifying tournament, CLICK HERE.