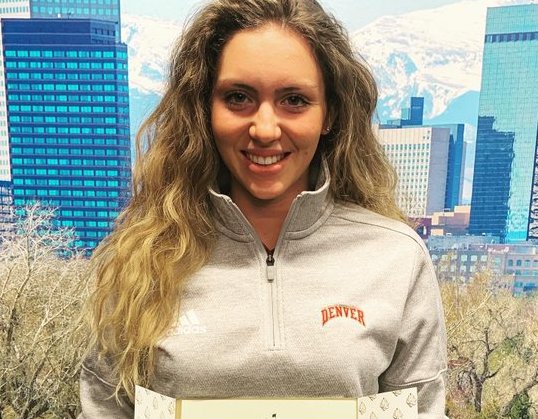 Now two players from Colorado-based schools are among those who share the single-round scoring record for NCAA women’s golf.

On Sunday, the University of Denver’s Anna Zanusso, a freshman from Italy, tied the mark with an 11-under-par 61 in the second round of the Westbrook Invitational in Peoria, Ariz.

Zanusso birdied her final two holes of the day, giving her 11 birdies in round 2. Zanusso, who recently received an invitation to compete in the second annual Augusta National Women’s Amateur in early April, drained an 8-footer on her final hole to tie the record.

Combined with her 69 in the first round, Zanusso leads the tournament by one stroke going into Monday’s final round.

Zanusso’s 61 ties the single-round women’s NCAA record, set by Stanford’s Mariah Stackhouse in 2013 and matched by the University of Colorado’s Esther Lee in 2016, Gonzaga’s Bianca Pagdanganan in 2017 and Mississippi’s Julia Johnson in November.

Lee, who now has her LPGA Tour card, fired an 11-under 61 in September 2016 at New Mexico’s Branch Law/Dick McGuire Invitational. Like Zanusso on Sunday, Lee made 11 birdies that day.

Zanusso, who won the Golfweek Conference Challenge in September at Red Sky Golf Club in Wolcott, currently sits at No. 73 in the Women’s World Amateur Golf Rankings.

Also on Sunday, Zanusso broke DU’s single-round women’s record, a 64 by Mary Weinstein shot in 2018. The Italian hit all 18 greens and had 25 putts for the round on Sunday afternoon.

“I was really confident with my game,” she said.

Denver is fourth out of 16 schools in the team standings at the Westbrook Invitational after two rounds.

For all the scores from the tournament, CLICK HERE.