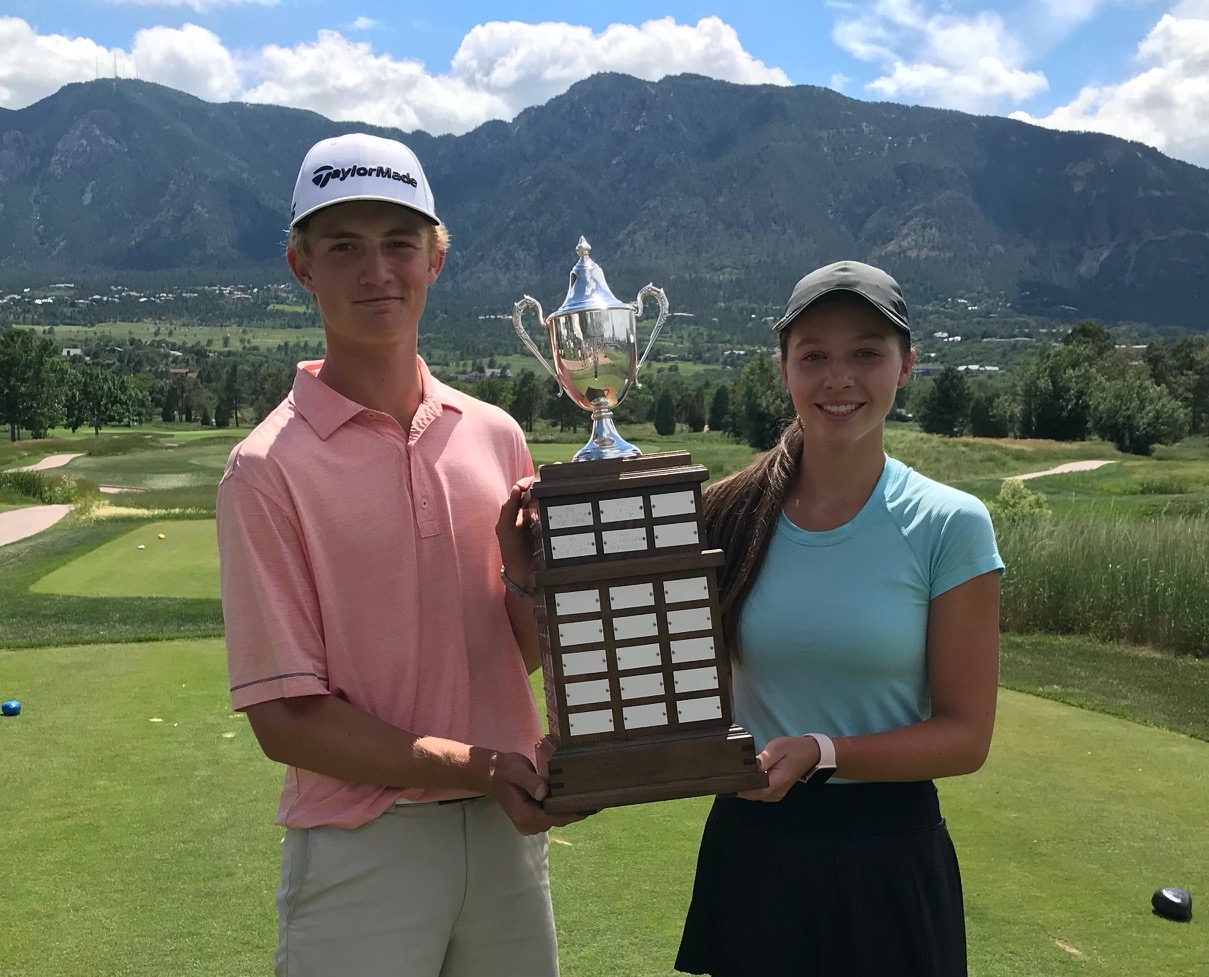 Matthew Wilkinson and Jessica Mason earned the hardware on Wednesday at the Country Club of Colorado.

The last week and a half of June treated Matthew Wilkinson of Centennial and Jessica Mason of Westminster pretty well, all things considered.

That stretch was capped off on Wednesday with victories by the two in the Colorado Junior PGA, the first major championship of 2021 for the Junior Golf Alliance of Colorado.

Those wins at the Country Club of Colorado in Colorado Springs come on the heels of qualifying for the U.S. Junior Amateur last week in the case of Wilkinson, and of a runaway 4A girls state high school title in the case of Mason.

In both Colorado Junior PGA tournaments, there was no lack of drama at the end. Wilkinson needed a playoff to prevail, while Mason sank a 5-foot par putt at the final hole of regulation to avoid sudden death.

Wilkinson won his second JGAC major — the previous one coming at the 2020 Colorado Junior Match Play, also in Colorado Springs. But after losing three strokes to par in his final seven holes of regulation on Wednesday, Wilkinson produced a nifty rebound in the playoff. In sudden death, he faced Hunter Swanson of Denver, the 2020 JGAC Boys Player of the Year who finished second in a playoff at last week’s First Tee National Championship in Clemson, S.C.

We’ll let Wilkinson take it from here in explaining how the playoff ended rather quickly, with his 2-foot birdie on the par-4 first hole at CCC.

“I don’t know why, but I decided to pull driver,” the 17-year-old said. “It’s about 370 to the green. I ripped one up hole high just left of the green and ended up getting up and down for birdie. That was good enough to get it done on the first hole” after Swanson missed his 20-foot birdie attempt.

All in all, that seems like a fitting end for Wilkinson, who parred less than half his holes for the week at the Colorado Junior PGA. In 54 holes, he had an eagle (on a par-4), 15 birdies, nine bogeys and four double bogeys. That’s to finish at even-par 213 before his playoff birdie.

Swanson, who verbally committed in February to join the University of Colorado golf team beginning in the fall of 2022, closed with the low round of the tournament, a 4-under-par 67, to catch Wilkinson at 213. Swanson carded a 4-under 32 on the front nine on Wednesday before going even on the back thanks to an 18th-hole birdie.

Sharing third place, four back of Wilkinson and Swanson, were Wes Erling of Colorado Springs (73 Wednesday) and Luke Cushman of Castle Rock (72).

For Wilkinson, a senior-to-be at Arapahoe High School, the outcome was another satisfying step in an impressive 2021. This year, in addition to his victory on Wednesday and qualifying for the U.S. Junior Am, he won a JGAC event at Collindale last week, an IMG Academy Junior World qualifier and a tournament in North Carolina. He also went to the quarterfinals of the CGA Match Play.

“It feels pretty good,” he said. “It’s just nice to see all the hard work I’ve put in the last four years now paying off. It’s exciting, fun times, I guess. But there’s still a lot more I’d like to achieve. This is just another thing to check off the bucket list.

“But it shows me I’m progressing in the right direction. Winning one (major) tournament wasn’t a fluke. It’s nice to know the things I’ve been working on are the proper things.”

By placing 1-2 in the boys competition, Wilkinson and Swanson qualify for the national Boys Junior PGA Championship, set for July 12-15 in Lexington, Ky.

As for the girls tournament, Mason trailed by a stroke entering Wednesday’s final round but emerged with her first victory in a JGAC major and her second big-time win in the last eight days.

“It feels really good,” the 17-year-old senior-to-be at Holy Family High School said. “My game is in a great spot and both of my (wins the last two weeks) mean a lot to me. I can still improve my short game for sure, but my ball-striking has been real good since the (AJGA Hale Irwin Colorado Junior, where she placed third among the girls). I feel great about my game right now, to be honest.”

Mason was a model of consistency this week, at least by glancing at her scores. She rattled off three consecutive 74s for a total of 9-over-par 222.

“I made it kind of interesting at the end, but I won so that’s all that matters,” said Mason, who, like CGA Women’s Match Play and Stroke Play champion Leigha Devine, receives instruction from impending Colorado Golf Hall of Fame inductee Ed Oldham.

After playing her front nine in a rock-solid 1 under par on Wednesday, Mason saw things tighten up considerably on the back nine when she went 4 over par in the stretch from the 11th through 17th holes. But her par on the 18th, where she two-putted from 25 feet but needed to make a 5-foot comebacker, preserved the victory.

Two players finished just a stroke back of Mason, tied for second place: Aubri Braecklein of Northglenn, the 2020 JGAC Girls Player of the Year who won the 2021 3A girls state high school title and the 2020 CGA Women’s Stroke Play; and Sofia Choi of Littleton, the 4A runner-up who birdied the final hole to tie Braecklein, who in turn had birdied 17. Braecklein closed with a 71 and Choi with a 76.

The runners-up then played off for the right to join Mason in qualifying for the Girls Junior PGA Championship, scheduled for July 27-30 in Louisville, Ky. The Georgia State-bound Braecklein prevailed to advance.

For all the scores from the Colorado Junior PGA click on the following: BOYS, GIRLS.