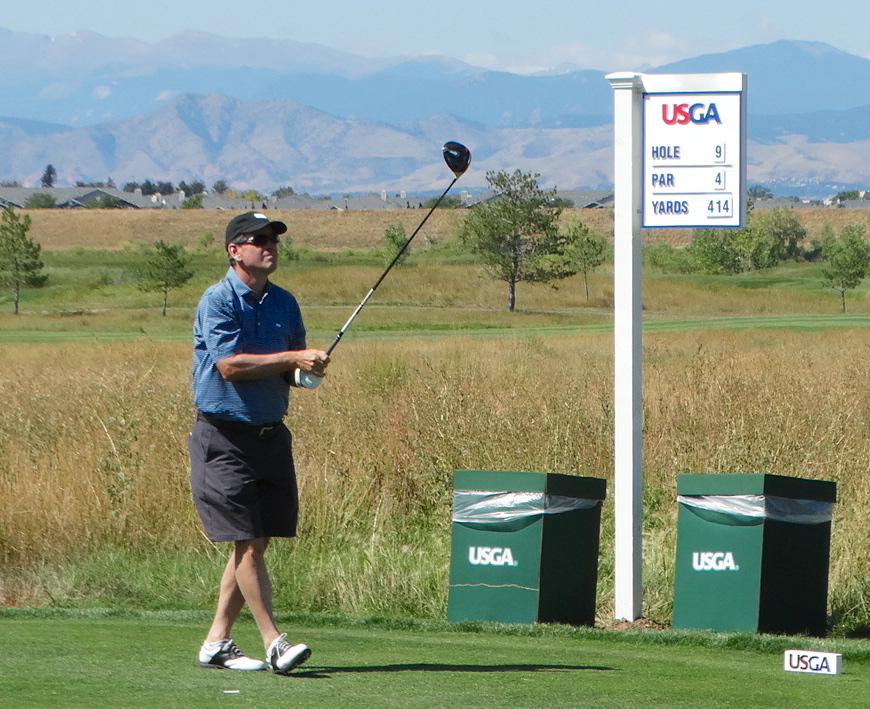 Coloradans gear up for ‘home game’ at U.S. Mid-Amateur; at 63, Coloradan Golf Hall of Famer Kent Moore will be oldest player in field

It seldom works out this way for a USGA championship, given the population here, but Colorado will be among the states with the most competitors in the 2019 U.S. Mid-Amateur.

Out of the 264 players in the field, a dozen are from Colorado. The only states with more golfers teeing it up when play begins on Saturday at Colorado Golf Club and CommonGround Golf Course are California (32), Texas (19), Georgia (15), Florida (14) and Illinois (13).

For the record, here’s the rundown of Coloradans competing in their home state for the event, which continues through Sept. 19.

And numerous Coloradans who will be competing fill unique niches in this national championship for amateur golfers 25 and older:

— There’s Moore (pictured above), who at age 63 will be the oldest competitor in the field. The next-oldest is Randal Lewis, who turned 62 in May.

“How about that?” Moore, a Colorado Golf Hall of Famer, said on Thursday after a practice round at CommonGround. “I feel incredibly blessed to be still playing (in this event). After playing the two golf courses, a couple of 75s would be really good for me. I told my friend Paul Brown last night, ‘The good news is there’s about four holes where my 3-wood sets up just perfect for my second shot on par-4s.’ He laughed. I can reach every hole, but there are about four of them that are really long on the two courses together.”

Moore, a vice-president on the CGA’s volunteer board of directors, played in the first U.S. Mid-Amateur, advancing to the round of 16 in 1981. And this will be his sixth national Mid-Am overall, but first since 2006. He qualified last month at The Club at Inverness.

“It’s all gravy for me, so I’m really looking forward to it,” he said of giving the U.S. Mid-Am another run at age 63.

— Moore, along with wife and fellow Colorado Golf Hall of Famer  Janet Moore, are also unusual in that while Kent is competing in the U.S. Mid-Am, Janet will be doing so at the U.S. Women’s Mid-Am in Flagstaff, Ariz.

While that’s certainly uncommon for a husband and wife, it’s by no means a first, even for the Moores themselves. They’ve both competed in their respective U.S. Mid-Amateurs in the same year before, and did likewise for the U.S. Senior Amateurs in 2015. In fact, they were both medalists in qualifying that year.

Janet Moore, by the way, will be playing in the U.S. Women’s Mid-Amateur at a course, Forest Highlands Golf Club in Flagstaff, where Kent competed in one of his U.S. Mid-Ams.

— There’s Call, who will be the lone player in the U.S. Mid-Amateur field who’s a member at Colorado Golf Club, where half of the stroke play and all of the match play will take place.

“I’ve gotten a lot of support from all the members at CGC, which has been a lot of fun,” Call said on Thursday. “It’ll be fun to go out and represent the club in a tournament. To play in a USGA tournament at Colorado Golf Club is going to be really good.”

It will be the sixth USGA championship for Call, but his first since 1999. The former University of Colorado golfer was in the field for one U.S. Open and two U.S. Amateurs during his college days. He’s been the player of the year for both the CGA and the Colorado PGA, meaning he’s gone from amateur to pro to amateur during his playing career.

Asked if he’ll feel additional pressure this week at his home club, Call said, “Thankfully, I’m at a place in my life where golf is a lot of fun and I enjoy it, but it’s pretty low down the list as far as things I get stressed out about. I’m just going to go out and really enjoy myself. I’m hitting the ball well and I’m excited. I’ll just let the chips fall where they may.”

— There’s Nosewicz, who won the 2015 CGA Match Play at CommonGround Golf Course and joined the men’s club at the facility two years ago as a way to gear up for this national championship.

“I love the layout,” he said on Thursday. “(Designer) Tom Doak does a great job. He gives you welcoming fairways and big greens, but makes you think around the greens. That’s kind of his M.O. It fits well to my eye. And Colorado Golf Club, I think it’s the best course in the state.”

Nosewicz knows there are more accomplished Mid-Am players on a national scale than the Coloradans entered this week, but believes the locals have an edge in some respects.

“I think we have a little advantage (because) we know how far the ball goes at altitude and we know the golf courses and I get to sleep in my own bed,” he said. “It’s a perfect kind of storm, I think. But you’ve got to execute.”

— Nosewicz is unique in another respect at the Mid-Am as he’ll be celebrating his 36th birthday during Sunday’s second round of stroke play.

“This is an awesome week,” he said. “My birthday is on Sunday. I get to play here Sunday afternoon. It’s the perfect tee time. I was telling my girlfriend a couple of weeks ago, ‘I’d just like to sleep in a little on my birthday,’ so a 1 o’clock tee time on Sunday will allow that.”

Overall, said Nosewicz, “I feel a lot more relaxed” with the event being in Colorado. “I know what to expect. Luckily this is my third USGA event and the ‘wow’ experience isn’t the night before. I get a couple of days to kind of focus — find the path, so to speak — and figure out what my game plan is — which I’ve done. This is our course. For a lot of people for USGA events, you fly in early or you drive in early, you play two or three practice rounds and you’re cramming for the exam.

“There are no guarantees, but it helps to have a little bit of a home team advantage. It does in all sports, but more importantly they’re courses I’ve played before and feel comfortable on.”

— As for Irwin, he’s one of the few players in the U.S. Mid-Amateur field after originally being an alternate at a qualifying site. But it wasn’t easy earning that crucial first alternate position at Inverness last month.

Irwin, a former CGA Player of the Year, needed five playoff holes to prevail in a playoff. He nailed down the spot when fellow former University of Colorado golfer Norton Rainey (of Colorado Golf Club) hit two tee shots out of bounds on that fifth extra hole.

— Then there’s Axlund, who will be competing in a second Colorado-based USGA championship, having previously played in the 2012 U.S. Amateur at Cherry Hills Country Club and CommonGround.

Notable: Colorado Sports Hall of Famer Chauncey Billups is scheduled to be the speaker for Thursday night’s players reception for the U.S. Mid-Amateur. Billups is a former University of Colorado basketball standout who played two stints with the Denver Nuggets, and was the Finals MVP in 2004 when the Detroit Pistons won an NBA title. His jersey No. 1 has been retired by the Pistons. He’s a five-time NBA All-Star and currently works as a national NBA TV analyst.