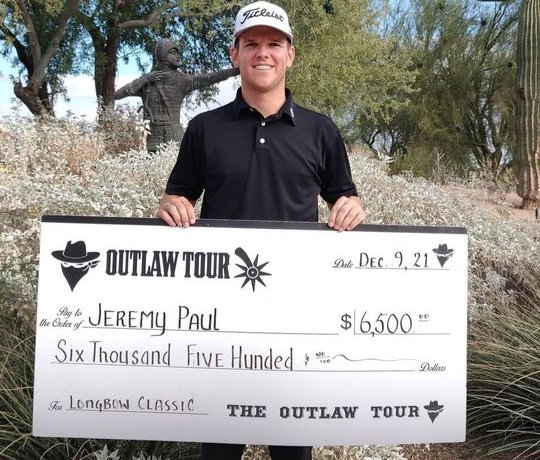 Jeremy Paul after his victory this week.

A month after earning exempt status for the 2022 Korn Ferry Tour at Q-school, former University of Colorado golfer Jeremy Paul was back having more success on the mini-tour level.

Paul won the Outlaw Tour’s Longbow Classic in Mesa, Ariz., on Thursday, earning $6,500 in the process.

Paul, who is exempt through at least the first eight tournaments of the 2022 KFT season by virtue of placing 11th in the final stage of Q-school, tuned up for bigger things by posting rounds of 63-71-69 in Mesa. That gave him a 10-under-par 203 total and a one-stroke victory in the 79-man event.

Paul finished with an eagle, 17 birdies, four bogeys, one double bogey and one triple bogey for the week.

For all the scores from the Outlaw Tour event, CLICK, HERE.