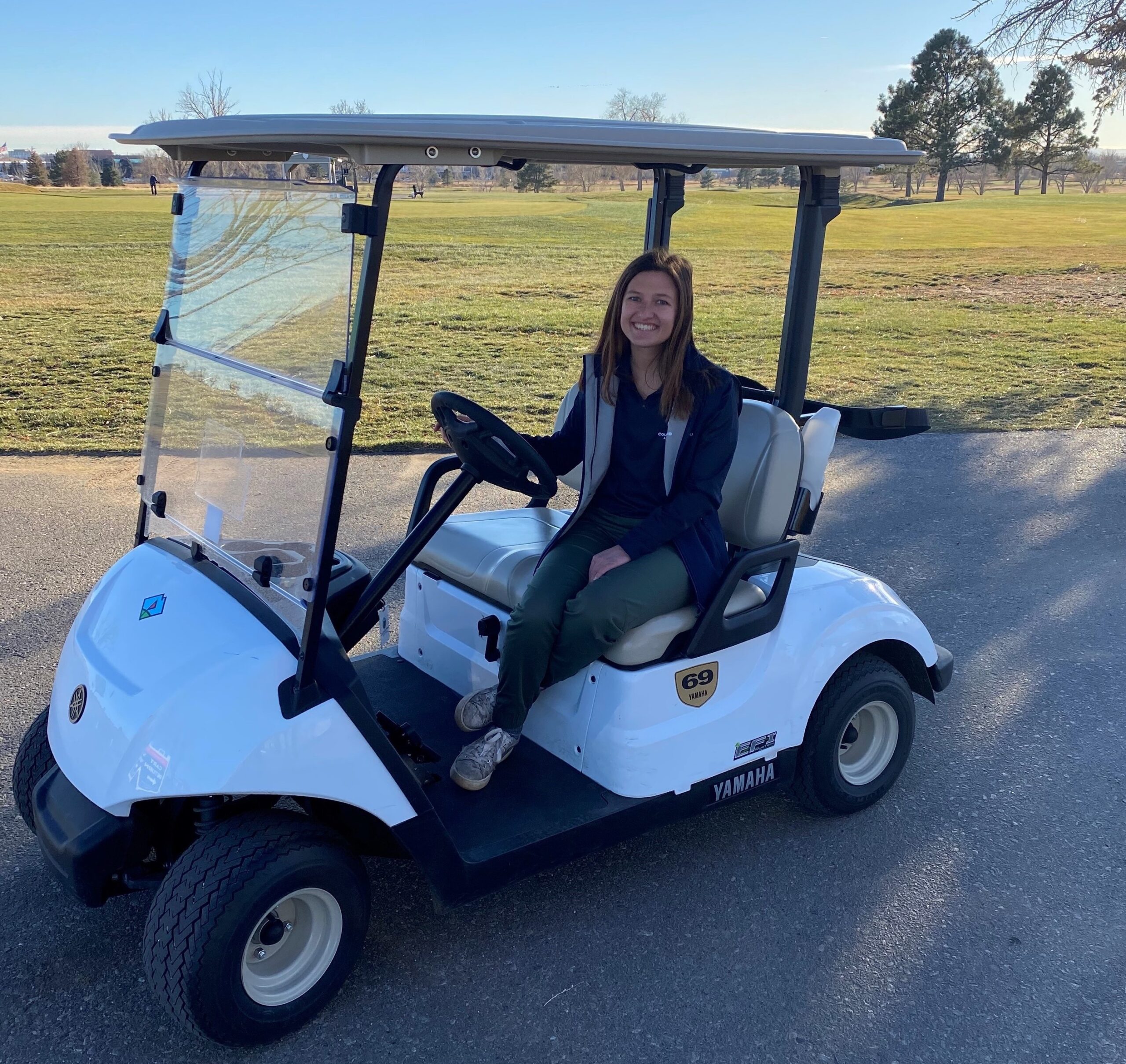 It’s certainly not a requirement, but as a practical matter the great majority of CGA staff members and interns were golfers before being hired.

It sort of goes with the territory.

But there are exceptions. And one of the CGA’s most recent hires falls into that category, though she’s been rectifying that situation.

Jill Marks, a P.J. Boatwright Intern since February who initially worked remotely while finishing up as a student at the University of Alabama, became a full-time staffer on Dec. 1, as the CGA’s communications manager.

While Marks played little golf prior to starting work for the CGA, that  could bring a valuable perspective regarding attracting more people to the game — especially newcomers.

Marks, who received both Bachelor’s and Masters degrees in marketing from Alabama in May, readily acknowledges that she’s largely now in the golf industry because that’s where an opportunity presented itself. But she definitely sees value in being a person who not so long ago was an outsider looking in regarding golf.

“It kind of provides a unique position for me as we’re looking to grow membership and continue spreading the word about the CGA and what we do,” Marks said this week. “I’m pretty much the only person in the office that (wasn’t) in the golf business before working for the CGA. I think that gives me a really unique perspective as we continue to grow because golf can be an intimidating industry to get into, especially for women and especially for people who are younger. I like to think that serving in this position will kind of provide that unique insight and will maybe allow for us to grow the people that we’re attracting.

“Especially when first getting introduced to the game, there’s potential you’re getting introduced by someone who’s really good at golf. That is something that can make it very intimidating when you first go out and play because there’s so much practice that goes into it. It’s one of those sports that looks easy, but it’s actually the hardest. Having that background and growing up with people who played golf and were good at golf — and never feeling like I was able to kind of infiltrate it myself — I definitely think that was one of the reasons I might have taken so long to pick it up.”

Indeed, it’s not as if Marks, 22, had never been exposed to golf prior to working for the CGA. Her dad plays the game, though he didn’t get into it until his mid-30s, and friends and family over the years have enjoyed golf, one or two at a very high level.

“I grew up around it in terms of having friends who played it,” said Marks, who grew up in Pensacola, in the western part of the Florida Panhandle. “I like to think I really saw the golf industry and sort of observed it if you will. But coming into this role, I picked up an entirely new understanding of the industry — the USGA, the state associations — and especially how marketing applies to it.”

And, as noted, Marks is getting into the game herself. She has a set of clubs and has played on occasion following CGA events, including at Fort Collins Country Club after a Member Play Day, which marked her first round in Colorado.

“I think I’ve improved a lot,” she noted. “I’ve really found my passion for the game through being in this role.”

Combining her marketing training — including field work as an intern — and the unique perspective she noted above, Marks could play a key role in helping the CGA continue to grow its membership, which has made significant gains recently. The association currently has about 69,500 members, and hopes to reach another milestone in the near future.

“We have that North Star of a goal, if you will, of 70,000 members,” Marks said. “I think the CGA has done a great job in prioritizing marketing these past couple of years in terms of recruiting members. But I really see this communications manager position as being the central hub for the marketing efforts of the CGA. … The CGA is continually looking to grow its marketing efforts. I think having me in this role not only will allow us to refine our current marketing efforts, but really home in on some new and exciting ventures that we haven’t had the capacity to do in the past.”

So, from the CGA’s perspective, what does a young and upbeat Marks bring to the table that will help the association’s cause?

“Very rarely will you meet somebody who overwhelms you with positivity the moment you meet them,” CGA executive director Ed Mate said. “That’s Jill.

“Her first staff meeting was on Zoom. It’s pretty hard to convey enthusiasm on Zoom — and she did. I’m like, ‘Holy cow. Who is this person?’ Our eyebrows were raised immediately with her. We don’t always have a seat on the bus for the right person for the right job fit when an internship ends. But in this case we did. It just so happens we’ve been looking to fill this manager of communications role for some time.

Beyond that, Marks believes what she’s recently learned at the University of Alabama, as well as her infectiously positive attitude, will be a plus in the CGA’s efforts to grow membership — and the game in general.

“I’d definitely say one thing I bring is fresh expertise,” she said. “I’m fresh out of school and I’ve been taking classes on all of the things that this communications manager position consists of. So I definitely have that fresh expertise.

“Additionally, I do think my attitude is something that speaks a lot about me. I like to think of myself as a very positive and enthusiastic person in general. The CGA position and working with the CGA as an intern has really allowed me to home in on that. It’s work that I’m really excited about. Not only am I naturally positive, if you will, but my enthusiasm for the role that I have for the golf industry and for the state of Colorado as a whole makes for a perfect melting pot for me in this position.”

Mate agrees the position seems an ideal fit for Marks.

“She’s going to be really focusing on membership promotion and membership retention just by adding engagement opportunities for our membership,” Mate said. “A program that she ran this year was our Fall Fitness Challenge. That was totally hers. We just said, ‘Jill, run with this.’ It was kind of a beta (test). And she did a fantastic job. More of those type of things, where she can use social media, her writing ability, her energy to figure out ways to get our members to love the game more and to be engaged with the CGA more.

“What I loved about that event is it encouraged our members to post scores. That’s one thing we really depend on. We want to get our members playing more golf, because if that happens, the whole game is healthier. A little challenge to get out and play more golf — and to walk. There’s tons of those kinds of things she’ll be focusing on.”

And perhaps, if the success of her beloved University of Alabama football program has rubbed off on her (six national titles since 2009), that could be a bonus.

Marks grew up about 225 miles south of Tuscaloosa, where she went to college, and her parents (both lawyers) met in law school in Alabama.

“I grew up an Alabama fan,” she said. “I like to tell everyone I was an Alabama fan before the (coach Nick) Saban era. Been through it all and still riding on that high right now.”

But in the end, a visit to Colorado two years ago — her initial first-hand encounter with the Denver area — convinced Marks that she would relocate to the Centennial State upon graduating. In fact, on her way back home from that visit, she told a friend of just such plans.

And now that Marks has lived in Colorado — specifically Littleton — for the last six months after graduating, what’s her first-hand impression?

“I absolutely love it,” she said. “I tell everyone all the time I traded the beaches for the mountains, and there’s not a day that goes by that I regret it. I think I’ve really found my place here. I love the weather — cold or warm — even though I know we’re still at the beginning of the winter season. The people out in Colorado have been great, and really laid back. And you really just cannot beat being right next to the mountains.”

And her time spent working for the CGA has been equally positive.

“I have absolutely loved it,” Marks said. “No two days are the same and I feel like I was lucky with the internship in the sense that I was able to put my name on a lot of the work that I was doing. I had a lot of control of the creative marketing techniques I was able to implement — social media especially. That’s something not of lot of internships offer. So I absolutely loved it.”

That’s Jill Marks, upbeat as ever.