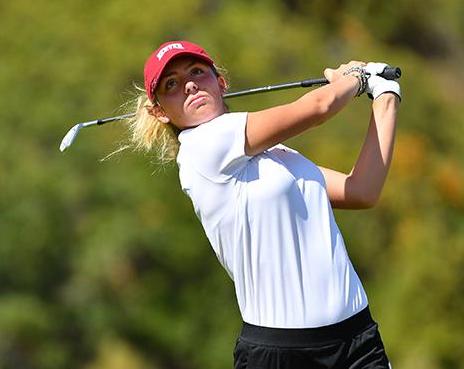 DU's Anna Zanusso has posted back-to-back rounds of 70 at regionals.

The University of Denver women’s golf squad remained in the hunt for its first team trip to the NCAA Division I national championships since 2009, but will need to rally in Wednesday’s final round of the NCAA Regional in Stanford, Calif.

With the top six team finishers and top three individuals not on those teams from each regional advancing to nationals, DU shares eighth place after Tuesday, and stands five strokes out of sixth place.

The Pioneers, seeded 10th in the 18-team field, shot a 9-over-par 293 on Tuesday, leaving them at 14 over after two days, tied with Northwestern and Pepperdine and five shots behind sixth-place Florida. DU, coming off a two-win month in April and competing in its 19th consecutive regional tournament, trails leader and host Stanford by 39 strokes.

Despite bogeying the final two holes, DU sophomore Anna Zanusso moved into the top 10 individually. The 2021 Augusta National Women’s Amateur participant shot her second straight 1-under-par 70, leaving her at 2-under 140 and five strokes behind the individual leaders.

Zanusso eagled her first hole on Tuesday and was 3 under for the day before her bogey-bogey finish. Also shooting 70 for DU on Tuesday was Alyson Bean, who rebounded from an opening-round 78 and shares 47th place.

In other women’s DI regional action, Coloradan Lauren Lehigh, a sophomore at New Mexico, shot a 7-over-par 79 on Tuesday at the Columbus (Ohio) Regional, dropping into 59th place at 155.

For the second straight day, play at the Baton Rouge (La.) Regional was postponed due to heavy rain. The one and only day of competition there will be Wednesday. University of Colorado junior Malak Bouraeda, competing as an individual, is in the Baton Rouge field.

The women’s NCAA DI national championships are set for May 21-26 in Scottsdale, Ariz.

To see scores from the DI Regionals, click on the following: STANFORD, COLUMBUS, BATON ROUGE.