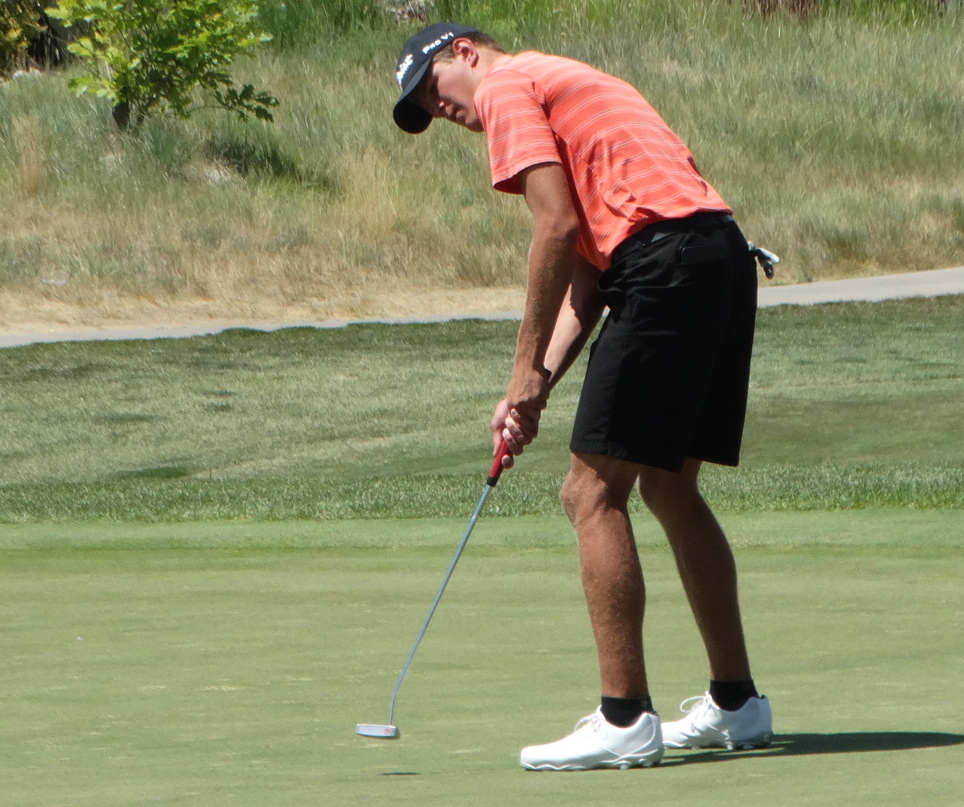 A grand total of one player broke par at Eisenhower Golf Club’s Blue Course, which will host next year’s U.S. Girls’ Junior Championship.

Jake Welch of Highlands Ranch (pictured above), winner of the Colorado Junior Amateur Championship last year, was the lone golfer to finish in the red on Monday as his 2-under-par 70 left him with a two-stroke lead in the boys division.

Meanwhile, three players share the top spot in the girls tournament at 5-over-par 77: Lauren Lehigh of Loveland, the JGAC Girls Player of the Year in 2018; Kaylee Chen of Greenwood Village; and Meghan Vogt of Broomfield, who qualified for the 2018 U.S. Girls’ Junior.

Welch, who played his final eight holes in 4 under par, finished the day with six birdies, two bogeys and a double bogey.

Sharing second place at even-par 72 are Jack Hughes of Snowmass Village, who on Thursday won the AJGA Hale Irwin Colorado Junior, and TJ Shehee of Mead, who qualified for the 2017 U.S. Junior Amateur.

The University of Colorado-bound Hughes made five birdies and five bogeys in round 1, while future University of Northern Colorado golfer Shehee recorded three birdies, a bogey and a double bogey.

Jackson Klutznick of Denver, winner of the JGAC Tour Championship and the 3A state high school tournament last year, holds fourth place at 73.

For the girls, Lehigh made two birdies on Monday, Vogt three and Chen one. Vogt shares the lead despite a quadruple-bogey 8 on her 13th hole of the day, at No. 4 at Eisenhower.

The 54-hole tournament will continue through Wednesday.

The top two finishers in both the boys and girls competitions will qualify for the national Junior PGA Championships in Hartford, Conn., with the boys tournament set for July 30-Aug. 2 and the girls July 9-12.