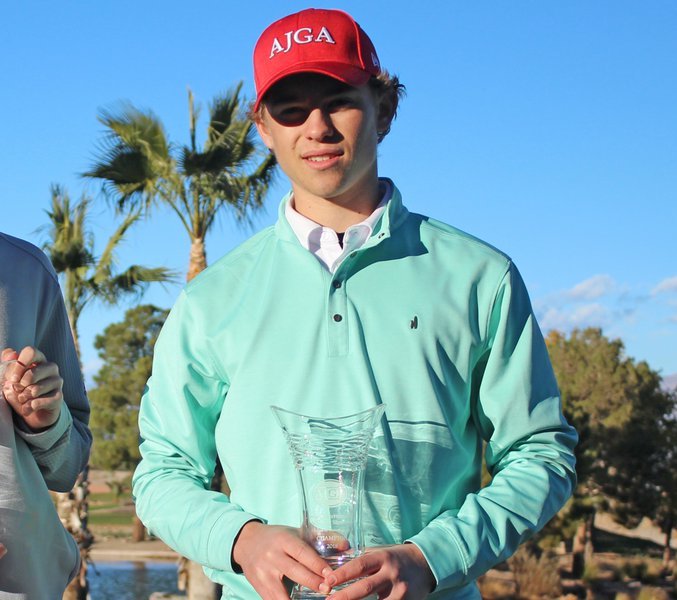 Las Vegas turned out to be very lucky for a couple of Coloradans over the weekend.

Not only did a junior golfer from the Centennial State — Billy Howenstein (left) of Boulder — win the AJGA’s evian International & Senior Showcase in Vegas on Sunday, but the player he defeated in a playoff also was a Coloradan.

Howenstein and Connor Jones of Westminster, both high school seniors, tied at even-par 142 for two rounds at Angel Park Golf Club. Then Howenstein, competing in his ninth AJGA event, prevailed in the playoff by draining a 10-foot birdie putt for his first AJGA title.

“Thank you to everyone who has gotten me to this point,” Howenstein told the AJGA. “It has been a long road but I’m very lucky and thankful for my family. It feels great to finally grind out a win.”

For Jones, the runner-up showing was his best showing in three AJGA events.

Howenstein posted rounds of 72-70 in Vegas, while Jones went 69-73. Howenstein (Dawson School) finished sixth two months ago in the 3A state high school tournament, while Jones (Mountain Range) was the runner-up in 5A.

The 78-player field was for boys high school seniors who have not yet committed to a specific college golf program.

Other Coloradans competing in the event included TJ Shehee of Mead (32nd place at 151) and Christopher Kennedy of Aurora (39th at 153), both past U.S. Junior Amateur qualifiers.