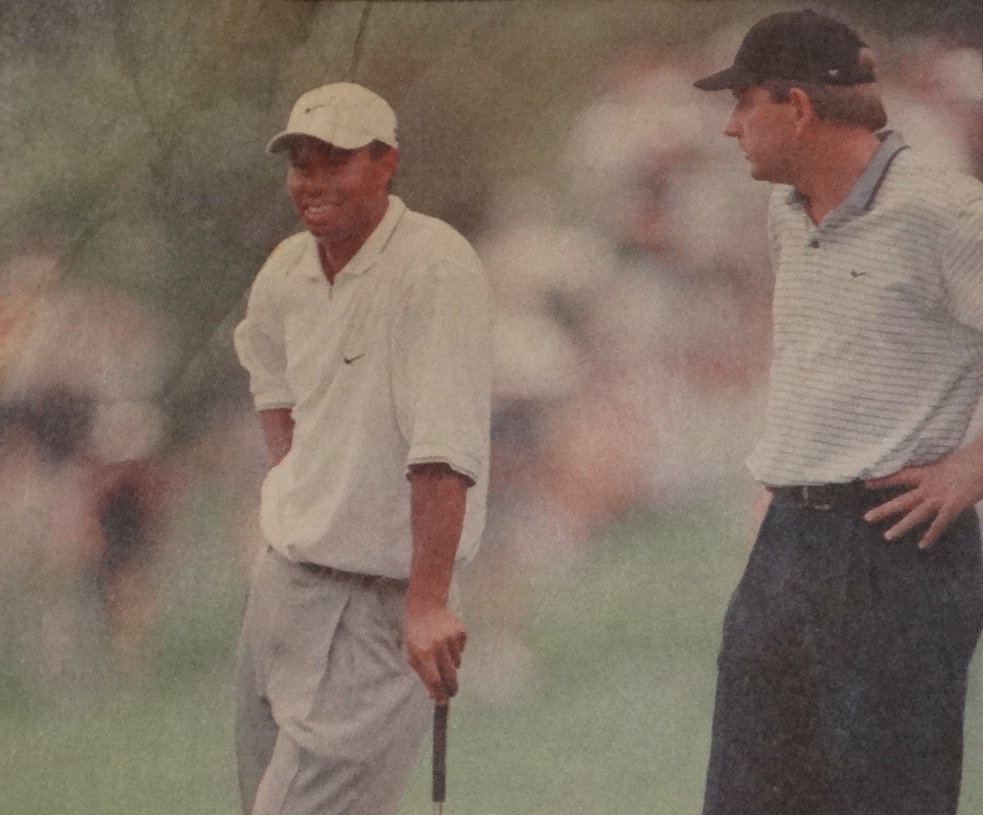 Tiger’s 20-year ace drought, which ended last week, dated back to 1998 International at Castle Pines — a hole-in-one that never made TV

Tiger Woods doesn’t have a lot of golf history in Colorado. He’s conducted a junior clinic or two in the state, and he played in the now-defunct International at Castle Pines twice — in 1998 and ’99.

But earlier this week, Woods relayed a rather amazing story — and it did indeed have a big link to Colorado.

Considering all he’s accomplished — 80 PGA Tour victories, including 14 major championship titles — it was astonishing to hear Woods indicate that while he made 19 holes-in-one before age 23, he hadn’t had one for over two decades — at least until this month.

In a casual round last week with Fred Couples in La Quinta, Calif. — and with his son Charlie also on hand — Woods aced the 210-yard second hole at The Madison Club, using a 5-iron.

And here’s the Colorado part of the story: Woods’ last hole-in-one prior to this month came at The 1998 Sprint International — specifically, on Saturday, Aug. 22, 1998. I was fortunate to have covered all 21 Internationals ever held, so that prompted me to dig a little deeper regarding the one Tiger made at Castle Pines Golf Club.

Combing through some stories I wrote that year and since then — along with other material — this is what I pieced together regarding the third and last ace Woods has made in PGA Tour competition.

It came at the seventh hole at Castle Pines, which was playing 185 yards that day. He took an 8-iron and holed it on the fly. Years later, when writing a retrospective on The International, I referred to the subsequent fan reaction as “one of the biggest crowd roars in tournament history.”

One of the most amazing things about it was that the ace wasn’t caught on TV — live or on tape.

As Woods (pictured with Nick Price at the 1998 International) said three years ago when recalling some of his more notable holes-in-one: “TV crews here have to take a mandatory union break, and it was on No. 7 at Castle Pines. I hooped it. They showed me on the sixth green, take the union break. I hoop it on 7. They catch me up on the eighth fairway, par-5 up the hill. So that was probably one of the more funny ones, because it went in the hole on the fly and tore up the cup.”

That was one of two eagles Woods made in round 3 and one of four for the week — two each in rounds 1 and 3 — which tied for the tournament record. Tiger, whose eagles were worth 5 points apiece in The International’s modified Stableford scoring format, finished fourth that year at The International, behind winner Vijay Singh, Willie Wood and Phil Mickelson.

Woods returned to Castle Pines in 1999, and barely missed advancing to Sunday. He never came back to The International, which was last played in 2006. His absence was considered one of the reasons the tournament ended its run — along with the lack of a title sponsor.

Tiger himself certainly found it amazing that he went 20 years without an ace, until ending the drought last week.

“Some of the best years of my career and I never made one,” Woods told ESPN’s Bob Harig.

Woods’ only other holes-in-one during official PGA Tour events came at the 1996 Greater Milwaukee Open in his pro debut and by far the most famous one — at the wild and crazy 16th hole at TPC Scottsdale in the 1997 Phoenix Open.