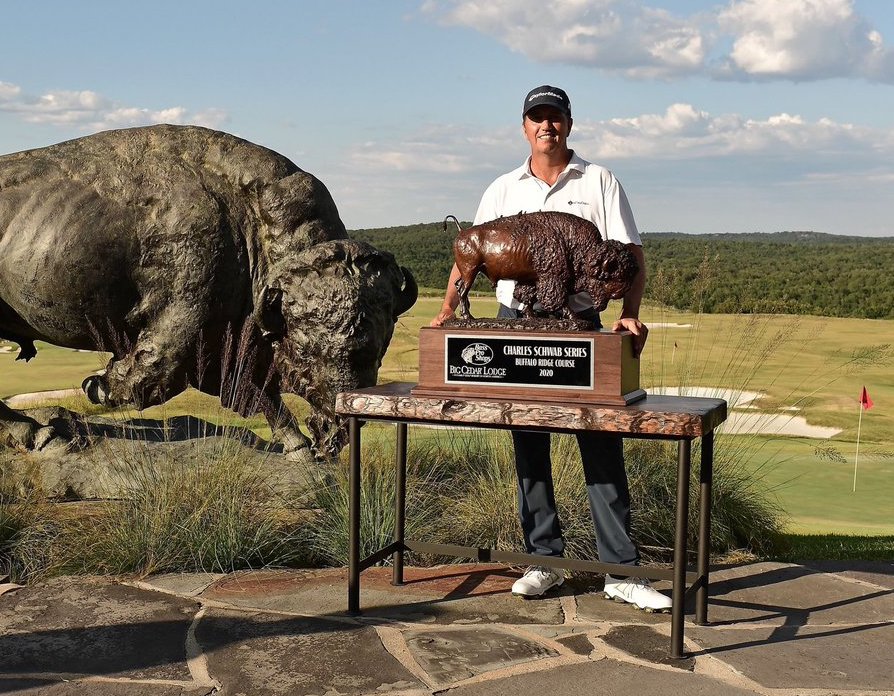 Shane Bertsch of Parker was thrown into the deep end this week in just his second career start on PGA Tour Champions.

In the last seven tee times for Friday’s final round of the Charles Schwab Series at Bass Pro Shops Big Cedar Lodge in Ridgedale, Mo., here are some of the players the Coloradan was joined by:

No pressure there for Bertsch, whose best finish on the PGA Tour was a fourth place, but who went into Friday’s final round with a four-stroke lead.

How did Bertsch deal with it?

Not so well in regulation on Friday, but great in a playoff.

After needing Perry to bogey the final hole of regulation to force a playoff, Bertsch promptly eagled the par-5 first hole from 15 feet for a dramatic breakthrough victory.

On the extra hole, Bertsch beat Langer — winner of 41 PGA Tour Champions events — along with Perry and Glen Day. From the rough, Bertsch’s second shot narrowly missed landing in a bunker, then bounced and rolled up to 15 feet short of the hole. He then curled his eagle putt into the left side of the cup.

“This is a special one,” said Bertsch, who earned $450,000 with the victory. “I’ve always had a hard time saying what my most special moment in golf is, but without a doubt it was that putt on the first playoff hole.”

Had Bertsch missed the putt, Langer was a good bet to make birdie from about 4 feet away.

After rounds of 64-64 the first two days, Bertsch struggled to a 1-over-par 72 on Friday — the highest score of anyone who finished in the top 20. But the 1998 Colorado Open champion redeemed himself in a big way in a playoff, emphasizing the moment with a fist pump and by kissing his putter. Langer subsequently gave the Denver native a thumbs-up for his first Champions victory.

“I really had a good feeling (going into the playoff) because I just felt like everything had gone the wrong way today and something had to go right,” Bertsch said. “And it did.”

Bertsch earned his Champions card for 2020 by being the medalist in Q-school last December. But his first start on the circuit was delayed until the end of July because the Champions didn’t play for almost five months due to Covid-19.

Bertsch will remain at Big Cedar Lodge in Missouri for another 54-hole Champions event that will begin on Monday.

For all the scores from this week’s event, CLICK HERE.