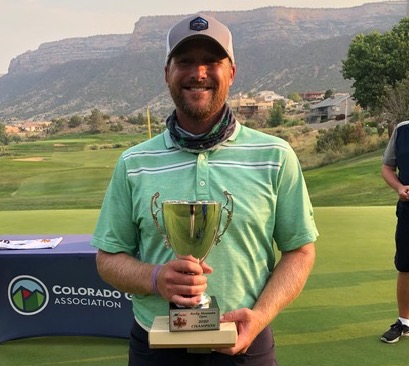 The opportunity was certainly there for Coloradans to win the 82nd Sinclair Rocky Mountain Open, but instead a golfer from out of state will depart Grand Junction with the title for the fourth consecutive year.

The top two players on the 36-hole leaderboard were Colorado residents — as were three of the top four. But there were many others in the mix at Tiara Rado Golf Course, and one of them — pro Mitch Carlson, a product of Las Vegas who now lives in Tempe, Ariz. — claimed the overall championship and the $15,000 that went with it.

However, a Coloradan did emerge with low-amateur honors as Cal McCoy of Highlands Ranch, the 36-hole overall co-leader, earned that distinction and finished fourth in the overall standings — the best showing by an in-state player.

Carlson, a 36-year-old former UNLV golfer, matched the low round of the day with a 6-under-par 65 to prevail by one with an 18-under 195 total for three rounds.

Carlson made seven birdies on the day — including one on the 18th hole, where he drove the green on the par-4 and two-putted — to go with one bogey on Sunday.

Kolton Lapa of Mesa, Ariz., tied for runner-up for the second consecutive year, this time sharing second with Jere Pelletier of El Paso, Texas. Lapa closed with a bogey-free 65, while Pelletier had a 66.

McCoy, who placed third in the CGA Amateur earlier this month, scored another top-four finish. But had he won, he would have become the first amateur to take the championship title at the RMO since Paul Brown in 1987.

The DU golfer was in good position through 15 holes, at 4 under for the day and 18 under overall. But he bogeyed each of the last three holes to lose his shot at the overall title. McCoy carded a 1-under-par 70 on Sunday for a 198 total, which left him three behind the champion.

Tying for fifth place at 199 were 36-hole co-leader Zahkai Brown of Golden and former University of Colorado golfer Yannik Paul. Brown, who tied the course record with a 60 on Saturday, settled for a 71 on Sunday. It was his second straight top-five showing in a state open as he placed third last week in the Utah Open. Paul, recent winner of the Arizona Open, closed with a 70 on Sunday after bogeying two of his last three holes.

Kyle Pearson of Highlands Ranch, the Colorado Mesa University golfer who won the CGA Western Chapter Championship at Tiara Rado earlier this month, finished in a six-way tie for seventh place with, among others, 2016 champion Nick Mason of Parker (71 Sunday) and Jeremy Paul, Yannik’s twin brother and a fellow former CU golfer.

In the senior amateur division of the RMO, 2019 CGA Senior Player of the Year Scott Sullivan of Grand Junction rallied in the final round to take the title. Sullivan, who recently won the senior title in the CGA Western Chapter Championship at Tiara Rado, shot the only sub-par round of the senior portion of the RMO with a 1-under-par 70 on Sunday. That gave the Colorado Mesa University men’s golf coach a 6-over-par 219 total and a one stroke victory over fellow Grand Junction resident Matt Hall, who closed with a 73. In the final round, Sullivan carded three birdies and two bogeys.