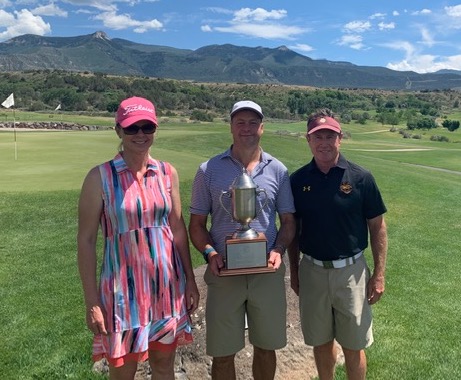 Bradsby captures his first CGA individual title and qualifies for CGA Am, which will be held on his home course; Sullivan repeats as senior division winner; Choate claims women’s victory

Richard Bradsby admits he had more than one motive for playing in the 37th CGA Western Chapter Championship this weekend at Battlement Mesa Golf Club.

Sure, he likes to compete and enjoys playing in this event. But he’s also a member at Lakewood Country Club, where the CGA Amateur will be held next month, and Bradsby hadn’t yet earned a spot in that state championship.

But he changed that on Sunday as he not only qualified for that tournament, but he earned a CGA title in the process.

The 51-year-old, who also is a member at Sonnenalp Golf Club in Edwards, shot rounds of 71-72 at Battlement Mesa, winning his third CGA championship and first individual title.

“A big reason for me wanting to play in this — besides this being a good tournament — is I wanted to qualify for the state am,” Bradsby said.

But, as he readily admits, “It’s great to take home a trophy. It’s a real privilege. I feel lucky.”

With a 1-under-par 143 total over the two days, Bradsby prevailed by two strokes over Keith Humerickhouse of Gypsum Creek Golf Course, the 2011 Western Chapter champion and four-time CGA Mid-Amateur winner. Humerickhouse’s 71 was the low score of the final round in the open division. Placing third on Sunday was Blake Kuzava of Fox Hollow Golf Course, who posted a 73 for a 147 total.

Bradsby built an advantage by playing his first seven holes in 3 under par on Sunday, making birdie putts of 6, 15 and 8 feet. But he had to take an unplayable on No. 9, leading to a double bogey. And he carded bogeys on 10 and 13.

“But I kept it together,” he noted. “I’m probably the most proud of that.”

On the par-5 17th, a 5-iron second shot from 220 yards led to a two-putt birdie. And, after a poor drive on 18, he one-putted for par from 5 feet after a good wedge shot to close out the tournament.

“I definitely played (some) very amateur-type holes, but I managed to recover from them and I putted pretty well,” Bradsby said. “They’ve got really good greens here with tough undulations, but I managed to keep my ball in the right place for the most part.”

Bradsby has notched several notable victories over recent years in better-ball events — with Steve Irwin in The Broadmoor Invitation in 2016 and with Jon Lindstrom in the CGA Four-Ball in both 2017 and ’18. But this weekend, he did it on his own, finishing with eight birdies, five bogeys and a double bogey over two rounds.

“I didn’t grow up playing competitive golf; I was a skier,” he said. “I started playing more tournament-type golf maybe eight years ago. I’m kind of late to it.

“Actually, I’ve been a little frustrated how I’ve been playing lately, so it was good to have some patience and just keep plodding along and finally put a couple of rounds together.”

In the senior Division at Battlement Mesa, Scott Sullivan of Bookcliff Country Club in Grand Junction continued his stellar play by winning for the second straight year, and for the third time overall, after also capturing the senior title in 2013.

Last month, Sullivan, the men’s golf coach at Colorado Mesa University, captured the championship at the CGA Senior Match Play. And last year, he advanced to the round of 16 at the U.S. Senior Amateur.

A year after prevailing in a playoff over Robert Polk at the Western Chapter, Sullivan won by four strokes this time. His 1-under-par 71 on Sunday left him at 3-under 141 overall. He made five birdies, two bogeys and a double bogey in the final round and finished with nine birdies for the two rounds.

Michael Smith of Rifle Creek Golf Course, the 2015 senior champion, placed second at 145 after closing with a 69. Polk was third at 150 after a 76 on Sunday.

In the women’s division, Britt Choate of Battlement Mesa claimed the title after first-round leader Lauren Murphy withdrew with an injury after warming up on Sunday morning. Choate went 91-91 and won by 15 strokes.

(The champions are pictured above, from left: Choate, Bradsby and Sullivan.)

For all the gross and net scores from the CGA Western Chapter Championship, CLICK HERE.