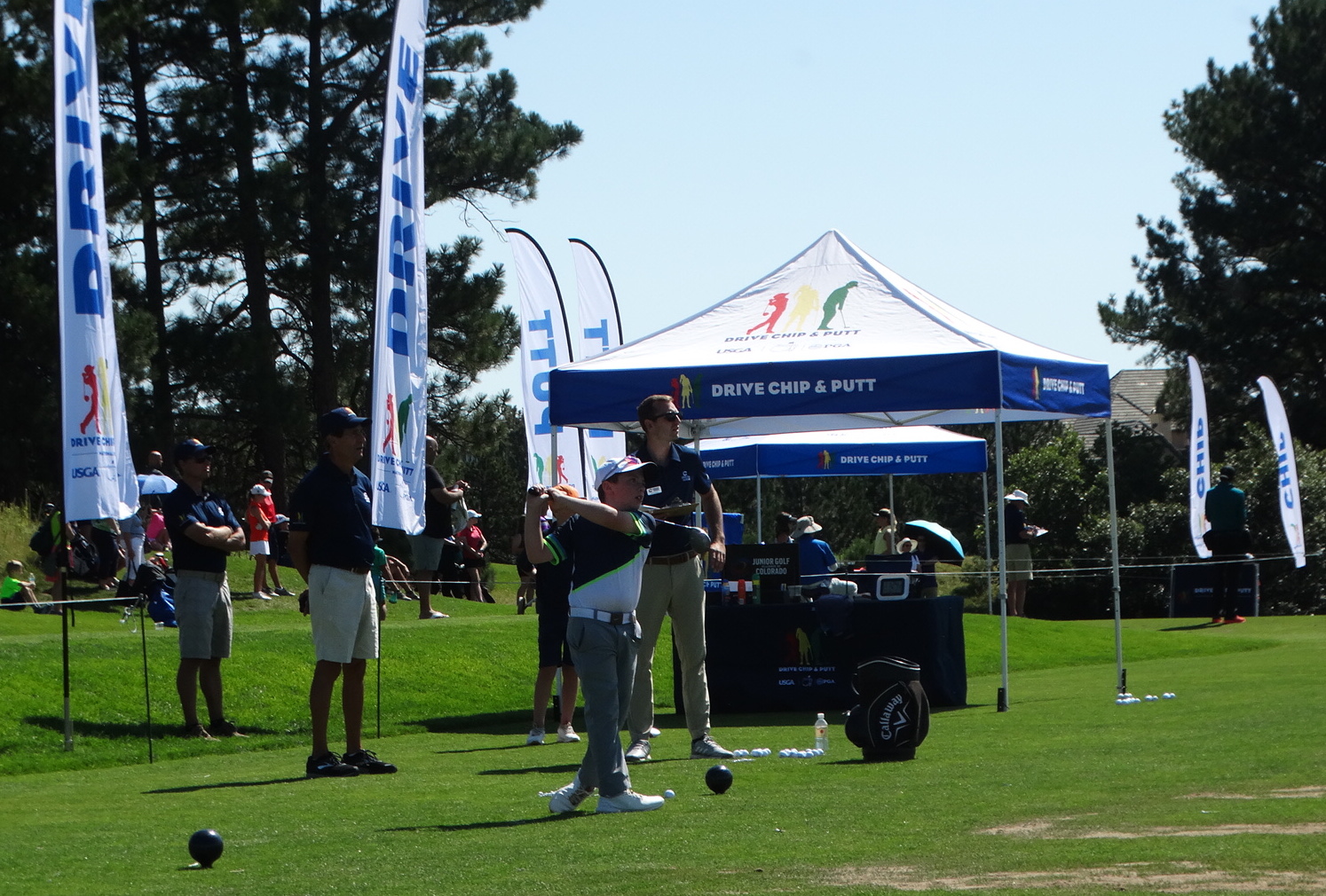 Colorado Golf Club has hosted a Senior PGA Championship and a Solheim Cup, and will have a U.S. Mid-Amateur under its belt within two weeks.

But what does Robert Polk, one of the original members of the Parker club and a current member of its board, have to say about what CGC did on Sunday — becoming the first Colorado site for a Drive Chip & Putt Regional?

“This is the best thing Colorado Golf Club has ever done,” the CGA Tournament Committee chairman said as he did volunteer duty Sunday at the driving station. “I’m on the board here and if they’ll allow us, I’d vote for this every single year. This is so spectacular. For the future of the game; that’s why this is so exciting. It’s so much fun and these kids are so good. And they all seem like really good kids.”

And, apparently, some of the competitors can flat out perform.

On a day that Coloradans were shut out of qualifying for the 2020 DCP National Finals, Mateo Rascon of Burlington, Iowa went where no player has gone before — at least around these parts. He not only won the boys 14-15 age division, earning him a berth to the DCP National Finals that will take place on April 5 at Augusta National on the eve of the Masters. But with a perfect score in a Drive Chip & Putt competition being 225 points, Rason scored 205.

Officials from the Junior Golf Alliance of Colorado who have run DCP events in the state for the seven seasons the competition has been around have never seen a score more than 200, much less one in the very upper reaches of the 100s.

Rascon hit all three of his drives through the grid — in other words, more than 300 yards — with one measuring 367. And this was into a headwind, though the shot is somewhat downhill. The performance earned him a perfect 75 points for driving. The 14-year-old also chipped in one of his three balls, and sank a 15-foot putt — again, one of his three attempts in that discipline.

When Coloradan Jack Chambers, who ended up finishing third out of 14 competitors in boys 14-15, saw Rascon’s score posted, “I was just thinking it’s the craziest thing I’ve ever seen in golf,” he said.

To put the 205 total into perspective, the high DCP score posted in the 10 Regional competitions last year was a 179. Matthew Troutman of Louisville, Ky., hit that mark last September at a Regional in Ooltewah, Tenn.

“My highest score has been 150 (before this),” said Rascon, who has competed in all seven seasons of DCP. “I thought I was going to do well after my first drives, but I wasn’t expecting that high.”

Rascon said he has never before played golf at altitude. “The drives (Sunday) actually felt pretty normal. I guess it’s because it’s downhill and the altitude is a little different. I probably carried the ball a little more.”

Rascon will be making his second trip to the DCP National Finals, having finished second at Augusta National in the boys 10-11 competition in April 2017.

“It was amazing,” Rascon said of competing at the site of the Masters. “The Regionals were at Hazeltine. I won there, and I had no clue what it was going to be like (at the National Finals). When I got there, it was like heaven.

“I’m really excited (to go back). It was crazy the first time.”

But no Coloradans will be joining Rascon at the 2020 DCP National Finals after three locals competed at that level earlier this year, one in 2018 and three in 2016.

All three Coloradans who played in the 2019 National Finals were at Colorado Golf Club on Sunday, but none came close to earning a second straight trip to Augusta National — which required winning one of the eight age/gender divisions on Sunday.

Chunya Boonta of Centennial placed eighth in the girls 14-15 Regionals, while two-time National Finalist Caitlyn Chin of Greenwood Village was fifth in girls 12-13, and Grady Ortiz of Colorado Springs was 14th in boys 7-9.

“The hard part is that there’s more pressure for Coloradans coming in,” given that the Regional was being held in-state for the first time, said Boonta, who in April posted the highest-ever National Finals finish by a Coloradan, a runner-up showing in girls 12-13.

Boonta said she personally felt more pressure than at Regionals out of state last year. “I tried to minimize the pressure as much as I could. My parents were super supportive. They said that they didn’t expect anything and that they were going to be proud of me no matter what. But I think it’s kind of all in my head — just pressure that I put on myself.”

But Boonta is all the more appreciative of the opportunity she had to compete at Augusta earlier this year.

“I look back and see how lucky I was,” she said.

Two Coloradans placed in the top three in their age/gender divisions on Sunday. Connor Young of Lakewood was second in boys 7-9, finishing 16 points behind the winner, and Chambers was third in boys 14-15, ending up 55 points behind Rascon’s sky-high number.

Neither Young nor Chambers had made it past the first round of the three rounds of qualifying tournaments before this year.

“I felt pretty good,” the 9-year-old Young said. “It was kind of hard for me because I didn’t know (champion Chase Hughes of Oklahoma City) was going to put up that big of a score. But I feel really good about (a runner-up finish).”

The Regionals are the third of four stages of the DCP, preceded by Locals and Sub-Regionals and followed by the National Finals at the site of the Masters.

DCP is sponsored by the Masters, the USGA and the PGA of America. The competition is limited to players 7-15. This is the seventh season of the event.

Prior to 2019, only three Coloradans had qualified for the DCP National Finals: Chin, Luke Trujillo and Arielle Keating in 2016, and Kaden Ford in 2018.

At Colorado Golf Club in Parker

Coloradans Who Won Individual Discipline (Or Tied for First)