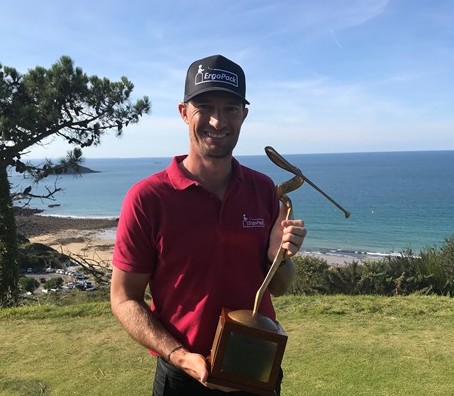 Ten days after a 10-under-par 61 in the first round of the KPMG Trophy led to a 13th-place finish in that European Challenge Tour event, former University of Colorado golfer Sebastian Heisele won on the Challenge Tour for the first time on Sunday.

Heisele (pictured in a EuropeanTour.com photo) went 64-65-65 in the last three rounds to prevail by two in the Open de Bretagne in Pleneuf, France. He posted a 13-under-par 267 total after carding five birdies on his final nine holes.

“It’s feels fantastic to win,’’ he said. ‘’This is a big confidence boost for me. I’m looking forward to what the rest of the season will bring.’’

Heisele, a former regular on the European Tour, played for CU from 2008 through ’11.

— Former CU women’s golfers Esther Lee and Jenny Coleman tied for eighth on Sunday in the Garden City Charity Classic in Garden City, Kan., both remaining in the top 10 on the Symetra Tour money list.

With just three tournaments left in the season, and the top 10 on the final Symetra money rankings earning LPGA Tour cards for 2020, Lee is eighth at $78,938 and Coleman ninth at $66,851.

— On Friday, Colton Yates became the second former Colorado State University player to post a top-10 finish at Pre-Qualifying for the Korn Ferry Tour, thus earning himself a spot in the first stage of Q-school.

With the top 41 players from the Pre-Qualifying in Woodland, Calif., advancing to the first stage, Yates placed third out of a 74-man field, shooting rounds of 68-69-66 for a 13-under-par 203 total. He finished five strokes behind co-medalists David Kim of Buena Park, Calif., and Brady Calkins of Chehalis, Wash.

Over the three rounds of the event, Yates recorded an eagle and 14 birdies.