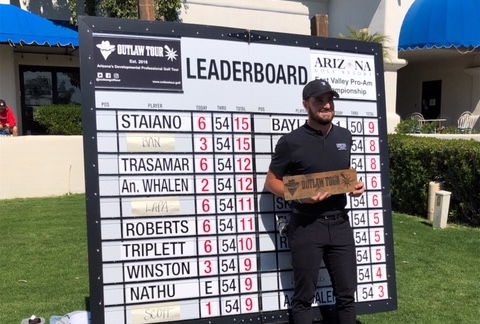 Jake Staiano after his win on Tuesday.

It took some very low scores — and a playoff — but Jake Staiano notched his first victory as a pro this week.

The Cherry Hills Village resident, a former Colorado State University golfer who earned the 2017 CGA Les Fowler Player of the Year award, prevailed on the first hole of sudden death on Tuesday in the Outlaw Tour’s East Valley Championship in Mesa, Ariz.

Staiano made a par on the first playoff hole to defeat Shintaro Ban of Las Vegas, who has played in four PGA Tour events since 2018.

Staiano, the low amateur in the 2017 CoBank Colorado Open after sharing the overall lead early in the final round there, went 64-67-64 in Mesa for a 15-under-par 195 total. For the week, he posted an eagle, 18 birdies and five bogeys.