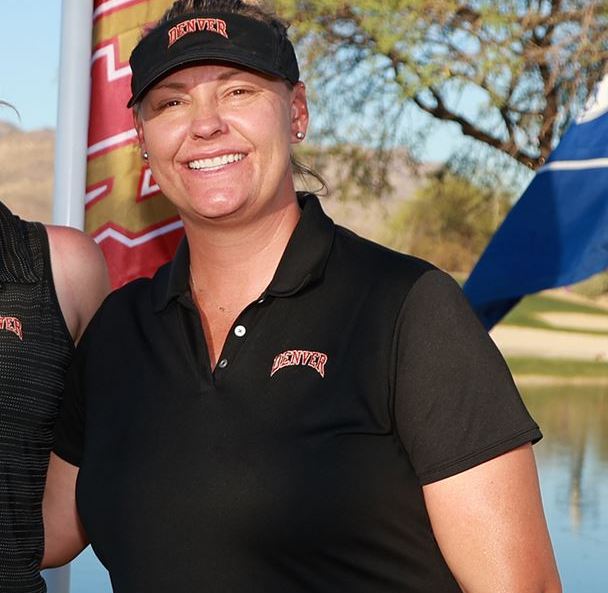 Lindsay Kuhle was a seven-time league coach of the year at DU.
(Photo: DU)

It’s been a summer of turnover in the Colorado NCAA Division I golf head coaching ranks like the state has rarely, if ever, seen before.

Then on Thursday, the University of Kansas announced that it’s hired Lindsay Kuhle, the DU women’s golf head coach since 2013 and an assistant coach for the Pioneers from 2005-12.

That’s head coaches of four of the nine Colorado DI programs exiting within a month of one another.

Asked why she was leaving DU to take over the Kansas women’s program, Kuhle told ColoradoGolf.org via text on Thursday that, “It was a once-in-a-lifetime opportunity and I loved the vision of the new (Kansas athletic director) to build something special there. They have a top-notch facility and course and can do amazing things at the championship level.

“(It was a) new opportunity and challenge for me I couldn’t pass up.”

Kuhle, winner of the CGA Women’s Stroke Play in 2005 when she was known as Lindsay Hulwick, is a graduate of Heritage High School in Littleton and earned a Masters Degree in sport and performance psychology while at DU.

“I cannot thank the University of Denver enough for believing in me and providing me the opportunity to start my coaching career and become a head coach,” Kuhle said via text.

“DU was my home for sixteen years; I earned my master’s degree here, shared many memories with coaches, players and administration, and watched this program grow into a consistent tournament team contending for conference championships every year while producing successful students and women off the golf course. It has been an absolute honor to guide this program the last 8 years.”

During her seasons at the DU helm, the Pioneers won seven conference titles and Kuhle was named league coach of the year seven times. DU notched 11 team titles and 10 individual victories under Kuhle. When she was a DU assistant under Sammie Chergo, the Pioneers finished fifth (2009) and sixth (2008) in the women’s NCAA national championships.

“Lindsay is a proven winner and has an extensive track record of success as a head coach, assistant and as a standout student-athlete,” new KU athletic director Travis Goff said. “She has built a championship culture at Denver where success on the course, in the classroom and the community are cornerstones and are exactly the characteristics we are looking for our in our leader.”

At KU, Kuhle will be the women’s counterpart to men’s coach Jamie Bermel, who came to Kansas after being at the Colorado State University men’s helm.

Among the Coloradans on the 2021-22 DU women’s roster are Caroline Jordaan and Emma Bryant. Anna Zanusso from Italy tied for ninth individually at the 2021 Women’s NCAA National Championships.