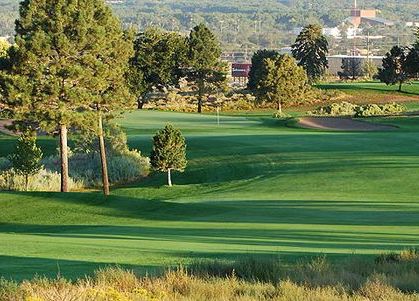 The team representing Colorado and the CGA improved by eight strokes on day 2 of the Pacific Coast Amateur and finished in 12th place in the 15-team field in the 36-hole Morse Cup competition.

Colorado’s score improvement on Wednesday at the Champions Course at the University of New Mexico (pictured) in Albuquerque tied for the largest in the field with the Southern California Golf Association.

With the top two individual scores each day counting toward the team total, the Coloradans shot an even-par 142 on Wednesday, giving them an 8-over 292 total for two days. University of Colorado golfer Ross Macdonald carded a bogey-free 2-under-par 69 and reigning CGA Mid-Amateur champion Jared Reid of Denver a 2-over 73 on Wednesday. The third member of the CGA squad, Ryan Burke of Longmont, posted his second straight 76.

The individual competition at the Pacific Coast Amateur will continue through Friday.

With a two-day total of 1-over-par 143, Macdonald shares 38th place individually in the 82-man field.

Meanwhile, Colorado Christian University golfer Chase Carlson, a third-place finisher in the NCAA Division II nationals, moved into 19th place individually at 140 after a 68 on Wednesday. Carlson was competing for the Washington State Golf Association.

Coloradan Greg Condon from Monte Vista, who was playing for the host Sun Country Amateur Golf Association, checks in in 26th place at 141 despite being the oldest man in the field at 57.

Quade Cummins of Weatherford, Okla., leads the individual competition with a 133 total after a second-round 66.

Here are the scores of the Coloradans and players with strong Colorado ties competing this week in the Pacific Coast Amateur: