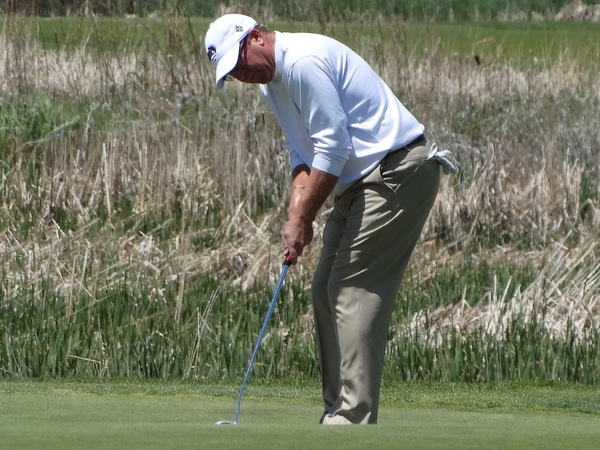 Mike Northern of Colorado Springs won the Colorado Senior PGA Professional Championship for the second time in four years on Tuesday as he birdied the 17th hole from 6 feet at Inverness Golf Club in Englewood to prevail by one stroke.

Northern (pictured) birdied three of his first five holes on Tuesday and was still 3 under for the day through 13. Bogeys on 14 and 15 cost him his outright lead, but he made a 6-foot par save on 16, then the birdie on 17 made the difference.

Johnson, who played in both the Senior PGA Championship and the U.S. Senior Open last year, closed with a 4-under-par 66 on Tuesday to place second at 138.

Tying for third were first-round leader Doug Rohrbaugh of Carbondale and Castle Pines’ Don Hurter, who both finished at 139.

Those four, along with Doug Wherry of Jake’s Academy (140), Colorado Golf Hall of Famer Ron Vlosich of Lakewood (140) and 2018 Colorado PGA Professional Champion Patrick Reidy of Inverness Golf Club (141) qualified for the national Senior PGA Professional Championship that will be played Oct. 3-6 in Austin, Texas. Colorado Golf Hall of Famer Bill Loeffler, who won that national title in 2007, is exempt into the championship.

For all the scores from the Colorado Senior PGA Professional Championship, CLICK HERE.