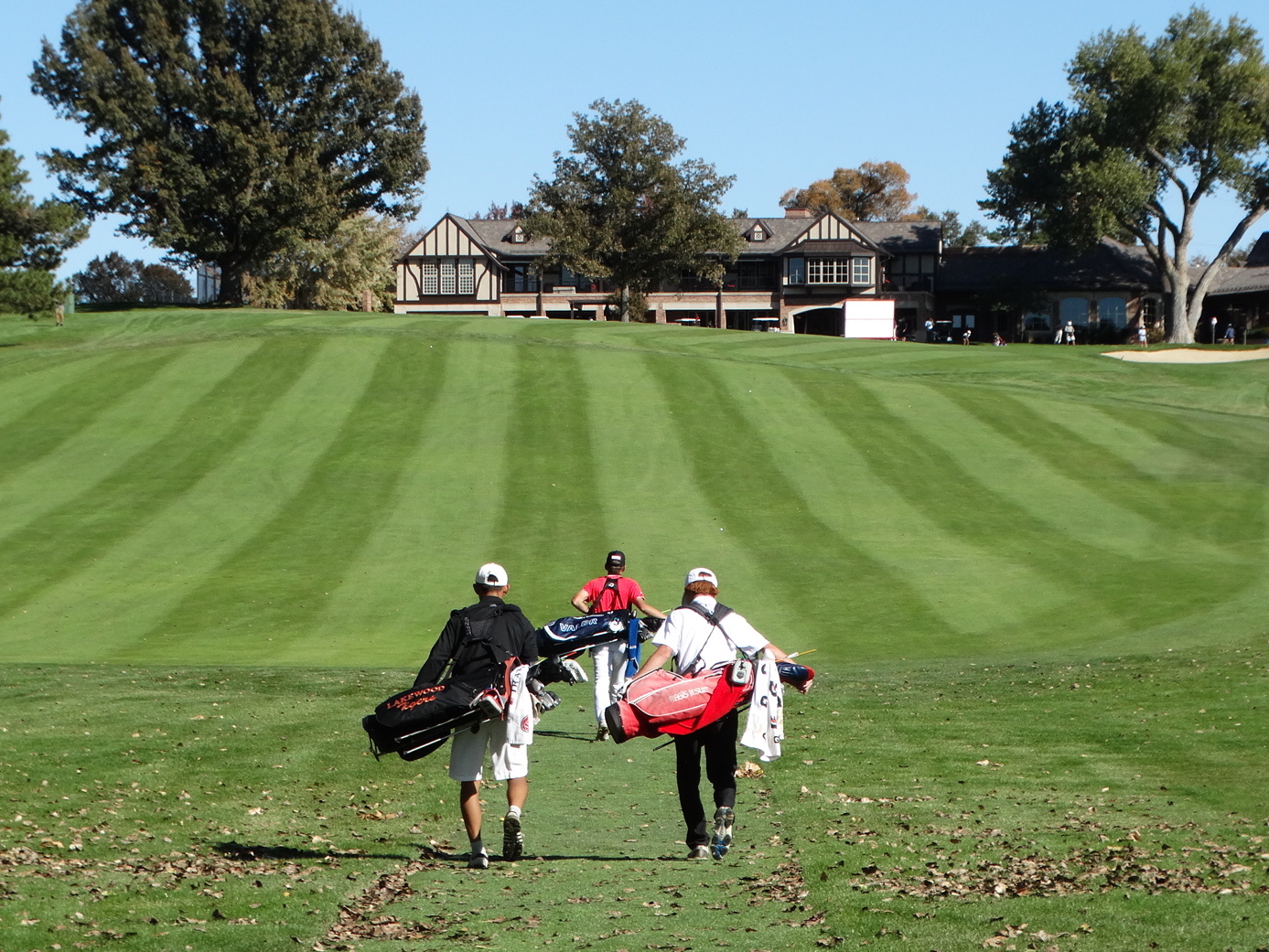 The almost-completed fourth year of the Junior Golf Alliance of Colorado produced highlights galore. That’s not unusual — the Alliance has done it every year since it officially launched in 2016 — but what might be is that the JGAC trajectory is now looking like the upward flight of a tee shot hit by Rory McIlroy.

For instance, just in the last year, membership at the Alliance jumped an amazing 40 percent, surpassing 1,400, which is certainly a record for the collaborative effort between the founding partners from the CGA and the Colorado PGA.

In addition, the cumulative number of rounds played at the many JGAC events in 2019 surpassed 5,000.

“It shows the game of junior golf is really healthy right now. It’s healthy in the state of Colorado,” said CGA director of junior competitions Jacob Erisman, who teams with Colorado PGA junior golf manager Scott Minta and numerous others staffers and interns from the CPGA and CGA to make the Junior Golf Alliance of Colorado a well-oiled machine on an ongoing basis.  “It shows a lot of kids want to play golf — competitively, but they also just want to get out and play golf.

“A lot of the growth we’ve seen we think is in part because of our partnership with Youth on Course,” where juniors play golf at participating courses for $5 or less. “We’ve seen a big growth in our Introductory membership, where kids are looking to become Youth on Course members and with that they get the $5 (at most) green fee. They’re not necessarily looking to play tournament golf, but just looking to have that access to get out and play golf.”

Building a strong foundation of members — of various ability levels — is key to the success of the JGAC, which tries to be a one-stop shop for junior golfers in the state. That’s why there are three levels of membership — Introductory, Series and Tour. And that success for the Alliance does indeed run the spectrum for junior golfers — from those just getting into the game to the highest level of junior competitors, those who will go on to play college golf at a high level.

With that in mind, here are some of the highlights for the Junior Golf Alliance of Colorado and its members in 2019:

— Early in the year, the JGAC broke some new ground by being the first organization of its kind to be named the “host group” for a USGA championship. That will be for the 2020 U.S. Girls’ Junior, which is scheduled for July 13-18 at Eisenhower Golf Club at the Air Force Academy. As such, the Alliance will be responsible for raising about $400,000 for the event. Eisenhower will be the first U.S. military-affiliated course to be the site for a USGA national championship.

— Well over 1,000 youngsters played in Colorado-based events for the Drive, Chip & Putt Championship, a junior golf development competition created and sponsored by the Masters, the USGA and the PGA of America. This year, Colorado hosted a DCP Regional competition for the first time, with Colorado Golf Club in Parker being a regional site for the first of two straight years.

In April at Augusta National Golf Club, a Coloradan cracked the top five in the DCP National Finals for the first time. In fact, all three Coloradans who qualified did so, with Chunya Boonta of Centennial (second in the girls 12-13 division), Caitlyn Chin of Greenwood Village (fifth in girls 10-11) and Grady Ortiz of Colorado Springs (boys 7-9) making the grade.

— The IMG Academy Junior World Championships is one of the most prestigious junior golf competitions on earth, and this year, Coloradan Walker Franklin finished fifth among 209 competitors in the boys 15-18 division in the San Diego area. Franklin has committed to play his college golf at the University of Louisville, which is coached by Colorado Golf Hall of Famer Mark Crabtree. Louisville is currently ranked No. 10 in the country by Golfweek.

— PGA Jr. League, a team event where players compete in jerseys, continues to be a popular program. This year, 210 Colorado-based teams featuring almost 2,400 players competed in PGA Jr. League events, which feature a two-person scramble format. Both those numbers are up about 30 percent over 2018. In September, a team from Colorado , the Timm Golf Academy All-Stars, narrowly missed advancing to the national PGA Jr. League Championship. The Timm Golf Academy All-Stars of Colorado finished a close second out of four teams at the Region 8 competition.

Hillary made a little history by winning the Tour Championship for the third time, becoming just the fifth girl in history to win a Colorado junior major at least three times.

Stewart was named the JGAC Boys Player of the Year for the second straight year, becoming the first person to claim that award twice on the boys side since 2006. Hillary earned the Girls POY honor for the first time.

“It was a great year because we had really special venues,” Erisman said. “We ended the year at Cherry Hills, one of the most storied venues in the country. And we had the Junior Amateur at Frost Creek, one of the most beautiful courses in Colorado.”

— Also achieving a rare accomplishment this year was Micah Stangebye of Montrose, who claimed his second straight 4A boys state high school individual title. He matched a feat managed by just two Colorado players before him — to twice sweep the boys individual and team championships in the same year. As a team, Montrose claimed its third consecutive title.

— For the second time in the last three years, the Colorado junior duo of Hillary and Schalk qualified in the state for the U.S. Women’s Amateur Four-Ball Championship, In the spring of 2018, they advanced to the round of 32 at the national event.

— Also regarding Hillary, the Cherry Hills Village resident had one of the top individual finishes ever by a Coloradan in the Girls Junior Americas Cup, placing third in the event which features some of the top female junior players from the western U.S., Canada and Mexico. Only one Coloradan, Jennifer Kern, has won the individual title in the GJAC, doing so in 1993.

— In June, Jack Hughes of Snowmass Village became just the third Coloradan to win the AJGA Hale Irwin Colorado Junior, joining Schalk (2017) and Stewart (2018). Other Colorado winners of AJGA events in 2019 include Hillary and Stangebye.

— At the Optimist International Junior Golf Championship, two Coloradans posted top-five finishes in their age/gender division, Chin was third in the girls 10-12, and Aspen’s Nic Pevny was fifth in boys 14-15.

— Last month, Aubri Braecklein of Northglenn finished second — losing a scorecard playoff — in the girls division of the pro-junior portion of the nationally televised PGA Tour Champions’ PURE Insurance Championship at Pebble Beach. Earlier in the year, Braecklein made a hole-in-one while representing Colorado at the Girls Junior Americas Cup.

JGAC Girls Player of the Year

Charlotte Hillary of Cherry Hills Village: The Northwestewrn University-bound Hillary has won the JGAC Tour Championship all three times she’s competed in the junior major, including twice at her home course of Cherry Hills Country Club. … Last month in Montana, she won an AJGA event for the first time. And this month, she teamed up with Hailey Schalk to qualify for the U.S. Women’s Amateur Four-Ball for the second time. …. Elsewhere, Hillary recorded one of the best individual finishes ever by a Coloradan in the Girls Junior Americas Cup by placing third. She was also second in the 3A girls state high school tournament, third in the CGA Women’s Stroke Play, third in the AJGA Hale Irwin Colorado Junior and 29th in the Girls Junior PGA Championship. … Earlier this month, Hillary was named the Girls Future Famer of 2019 by the Colorado Golf Hall of Fame. … Next month, Hillary will compete in the prestigious AJGA Tournament of Champions in Florida. … Off the course, Hillary was recently named the First Tee Volunteer of the Year by the Colorado Open Golf Foundation board, having raised $20,000 for The First Tee and $20,000 more for AJGA ACE Grants.

JGAC Boys Player of the Year

Dillon Stewart of Fort Collins: Stewart earned this award for the second straight year, becoming the first two-time winner of the honor on the boys side since 2006. … In 2019 he won the final two JGAC majors in which he competed — the Colorado Junior PGA by eight strokes and the Colorado Junior Amateur by four. … The 2018 boys Junior America’s Cup individual champion also represented Colorado in the 2019 JAC. He also tied for qualifying medalist honors for the U.S. Junior Amateur for the second straight year and qualified for the national Boys Junior PGA Championship. … Nowadays, Stewart is playing college golf for the perennial powerhouse that is Oklahoma State.

Elan Fleetwood of Parker: Sixteen-year-old dropped her handicap 8.3 strokes since the beginning of the year. She won three 14-18 Series events in 2019

Award of Excellence (based on community service, character, overcoming hardship and showing spirit of the game of golf)

Chase Hume of Sterling: A captain of his high school golf team in Sterling, Hume serves on the Sterling Family Resource Board of Directors, volunteers his time to work with underprivileged kids, serves as the president of his high school’s Tech Club, and maintains a 3.99 GPA.

Clara Hosman of Parker:  The high school senior has played in the JGAC since 2016 and competed in 13 events this year and is a 2019 JGAC Academic All-Star.

Ashley Kozlowski of Littleton: The high school senior has played in the JGAC since 2017 and competed in 12 events this year. She’s a 2019 JGAC Academic All-Star and was also one of less than 1 percent of high school seniors to qualify as a National Merit Scholarship semifinalist.

Trinity Stuart of Westminster: The high school senior has played in the JGAC since 2017 and competed in 12 events this year and is a 2019 JGAC Academic All-Star.