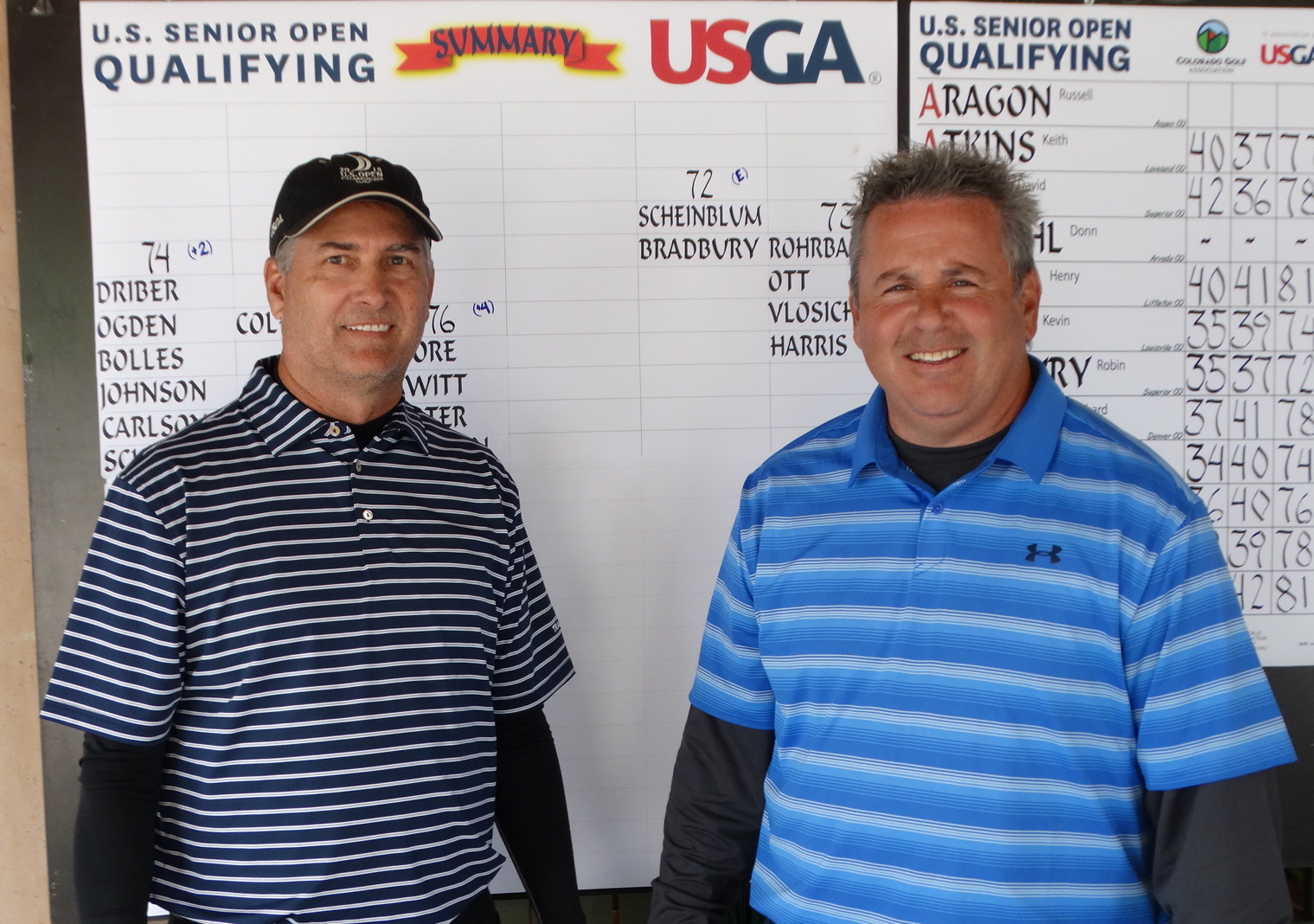 At 62 years old, amateur Robin Bradbury of Superior thought his window of opportunity to qualify for the U.S. Senior Open might have closed.

After all, qualifying for the event is open to players 50 and older, and to pros and amateurs. He figured his chances of being one of the top two finishers out of a qualifying field of about 80 players weren’t very good at all.

“I was getting to the point like I didn’t feel like I needed to play these anymore because I didn’t think I could compete,” the 2016 CGA Senior Player of the Year said. “I was ready to say this is probably beyond me at this point.”

But right when Bradbury was about to throw in the towel, the stars aligned on Tuesday at Valley Country Club in Centennial and he punched his ticket to arguably the most prestigious senior golf tournament of them all. He and professional Monte Scheinblum of Tustin, Calif., who matched Bradbury’s even-par 72 for co-medalist honors, will be headed for the U.S. Senior Open June 27-30 at the Warren Golf Course at Notre Dame in South Bend, Ind.

It’ll be the first Senior Open for both players. (The two are pictured at top, with Bradbury at left.)

Bradbury becomes the first Colorado amateur since David Delich in 2008 to finish in the top two at in-state qualifying for the U.S. Senior Open, though Charlie Post (2017) and Delich (2015) landed spots in the national field after coming off the alternate list, and Scott Sullivan qualified in Kansas in 2010.

On a cool Tuesday at Valley with pin positions that proved very challenging, none of the 77 contestants bettered par, which was saying something considering the field included some of the better golfers Colorado has produced in recent decades, along with plenty of other notable players.

After leaking some oil on the back nine on Tuesday, Bradbury finished strong to tie for low score. After making a mess of the par-4 17th, he emerged with a bogey by sinking a 20-foot putt. Then on the par-5 18th, he hit a wedge to 2 foot for a crucial birdie. And to complement those two, he threw in a birdie putt he estimated at 90 feet on the front nine. And even then, he thought his 72 would have little or no chance to qualify.

“I thought it would maybe be an alternate, but not have any chance for the Open,” he said. “It’s like a dream come true — no question.”

As it was, the 72 was one better than two players who have qualified for nine U.S. Senior Opens between them — Ron Vlosich of Lakewood (five appearances) and Doug Rohrbaugh of Carbondale (four) — and two others, Kevin Ott of Golden and Brian Harris of Denver. Rohrbaugh birdied the first playoff hole to earn the first alternate spot, while Ott, the 2016 CGA Senior Amateur champion, will be the second.

Bradbury has now qualified for two USGA championships in his life, and both have come since he turned 60. He competed in the U.S. Senior Amateur — and made match play — in 2016.

“When I got to the USGA Senior Am a few years ago, that was a huge accomplishment,” he said. “To get to the Senior Open is even bigger — top of the world.

“I’m anxious to call my son — he caddied for me in the USGA Senior Am — and tell him we’re going to the Open. It will be a big deal. I’m very excited.”

To say that Bradbury hadn’t expected to advance would be an understatement.

“I don’t even know when (the championship) is. I’m in shock,” he said.

As for Scheinblum, a balky putter almost cost him a spot in the U.S. Senior Open on a day that his tee-to-green game was spot on for the most part.

But the 72 was good enough to get Scheinblum a U.S. Senior Open berth a year after he lost out on a spot in a playoff for the 2018 championship at The Broadmoor in Colorado Springs.

“It’s my first major championship,” he said. “I was close to playing in the U.S. Open a couple of times when I was younger. After losing in a playoff last year, it’s pretty big redemption. Getting in the U.S. Senior Open is right up there for me.”

Scheinblum is a golf instructor who won the World Long Drive Championship in 1992. While he’s lived in Colorado just one year of his life, he has an interesting connection to Denver. In 1971, his dad Richie played for the Triple-A Denver Bears and won the American Association most valuable player award after hitting .388 for the season, with 25 home runs and 108 runs batted in. That earned him a promotion to the Kansas City Royals, where he was a major league All-Star in 1972.

“Denver has been a good place for my family,” Monte said. “Plus it’s such a great town. I love it here.”

At Par-72 Valley CC in Centennial

For all the scores Tuesday at Valley, CLICK HERE.