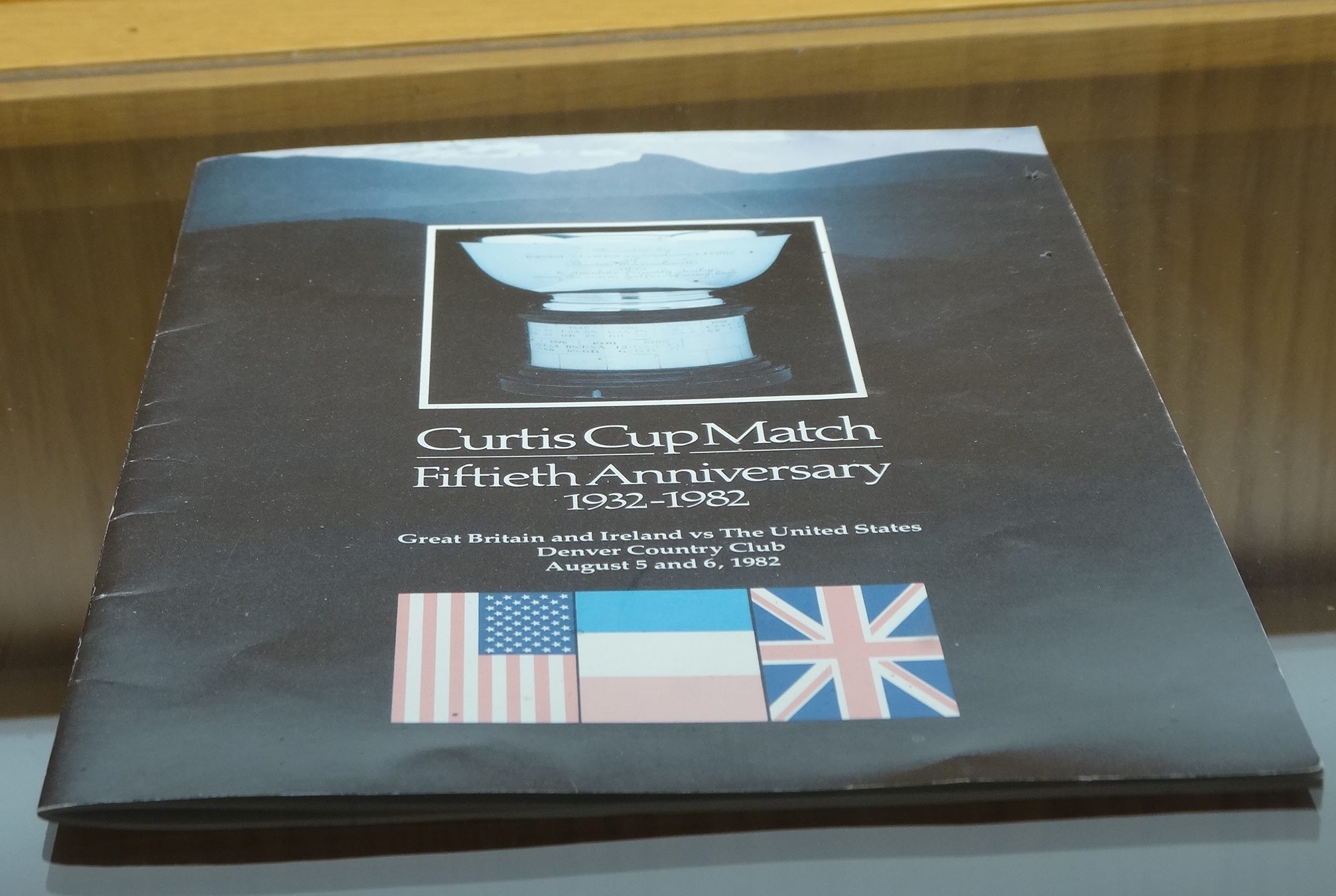 The Curtis Cup at Denver Country Club was the first of four USGA championships held in Colorado in 1982.

Though 2020 U.S. Girls’ Junior in Colorado has been canceled, it’s worth remembering the last time the event came to the state, which was part of the most hectic year of big-time golf in Colorado history

This summer was supposed to mark the first time in 38 years that the U.S. Girls’ Junior would be contested in Colorado. But on Friday, the USGA announced that the championship, which had been scheduled for July 13-18 at Eisenhower Golf Club at the Air Force Academy, has been canceled for 2020 due to the effects of the novel coronavirus. There’s hope that a future U.S. Girls’ Junior — perhaps in 2023 — can come to Colorado and to Eisenhower.

But before we leave the U.S. Girls’ Junior and plans for.a 2020 USGA championship in Colorado in our rearview mirror, it’s worth taking a stroll down the state’s USGA memory lane. In particular, let’s revisit 1982, the last time the Girls’ Junior came to the Centennial State — and a year unlike any other for Colorado’s USGA history.

So what makes 1982 so notable from the perspective of USGA championships — and big-time golf in general — in Colorado?

But, hands down, the single busiest year in Colorado golf from a USGA championship perspective was 1982, the third time the U.S. Girls’ Junior was held in the state.

Just how busy was it that year?

Not only were there four USGA championships conducted in Colorado in ’82 — which is twice as many as the next-busiest year in state history — but all four took place in a span of less than two months. In fact, there were national USGA competitions held in three consecutive midsummer weeks in Colorado.

The Curtis Cup, featuring the best female amateurs from the U.S. squaring off with their counterparts from Great Britain & Ireland, took place Aug. 5-6 at Denver Country Club. It marked the 50th anniversary of the historic event. The Americans, led by future LPGA major winners Juli Simpson Inkster and Kathy Baker-Guadagnino, along with now-World Golf Hall of Famer Carol Semple Thompson, won the competition for the 12th consecutive time, this time by a 14.5-3.5 margin.

The U.S. Girls’ Junior was conducted the next week at Greeley Country Club. Heather Farr won the first of her two USGA championships, the other coming in 1984 at the U.S. Women’s Amateur Public Links. Farr would go on to play for several years on the LPGA Tour. In fact, there’s an LPGA honor named for her — the Heather Farr Player Award, given since 1994 to an LPGA competitors “who, through her hard work, dedication and love of the game of golf, has demonstrated determination, perseverance and spirit in fulfilling her goals as a player.” Farr died at age 28 in 1993 after battling breast cancer. The University of Colorado women’s golf program hosted the CU Heather Farr Memorial Invitational from 1998 through 2010. CU coach Anne Kelly’s time on the LPGA Tour overlapped with that of Farr. Future LPGA Tour event winners Danielle Ammaccapane, Kris Tschetter and Nanci Bowen were also in the field at Greeley Country Club.

The final Colorado event in the three-week USGA stretch in August came at The Broadmoor Golf Club’s South Course in Colorado Springs, where the U.S. Women’s Amateur was contested. Two weeks after helping the U.S. win the Curtis Cup at Denver Country Club, Inkster captured her third straight U.S. Women’s Amateur title and one of her five USGA titles overall. She would go on to win two U.S. Women’s Opens, seven LPGA majors overall, and she claimed 31 LPGA titles all told en route to the World Golf Hall of Fame.

But the four USGA championships weren’t the only big-time golf events held in Colorado in 1982. There were also an LPGA Tour event, a Senior Tour event, a major pro-celebrity tournament and two international junior competitions conducted in the state that summer.

The 1982 Columbia Savings Classic was contested July 29-Aug. 1 at Columbine Country Club, with future World Golf Hall of Famer Beth Daniel prevailing for the second time in three years at the site.

The inaugural Denver Post Champions of Golf was held Aug. 12-15 at Pinehurst Country Club, with one of the game’s all-time legends, Arnold Palmer, winning. Palmer, of course, also won the 1960 U.S. Open in Colorado, at Cherry Hills Country Club.

In addition, in terms of star power one of the biggest events was the annual Jerry Ford Invitational, which was held in Vail and featured some of the biggest names in sports, entertainment and professional golf, along with former President Gerald Ford himself. Prevailing in the professional division in 1982 was 1973 British Open champion Tom Weiskopf.

Also in 1982 in Colorado, Eisenhower Golf Club hosted the Junior America’s Cup, which featured many of the top boys players from the western U.S., Canada and Mexico. Northern California captured the team title, and future PGA Tour winner Billy Mayfair was among the contestants.

The ’82 Girls Junior Americas Cup was also held at Eisenhower, with Northern California prevailing in the team competition there as well.

And, by the way, though it wasn’t a national championship or a tour event, the 1982 Colorado Open at Hiwan Golf Club in Evergreen wasn’t too shabby either. The field featured several players who now have PGA Tour victories to their credit, including Dave Hill, Corey Pavin, Larry Mowry, Bob Byman and winner Dan Halldorson.

Meanwhile, there were also memorable annual events held that year such as the CGA Amateur and CGA Match Play (both won by Rick Cramer) and the Colorado PGA Professional Championship (won by now-Colorado Golf Hall of Famer Jack Sommers).

All in all, 1982 was a hectic and very memorable year in Colorado golf.