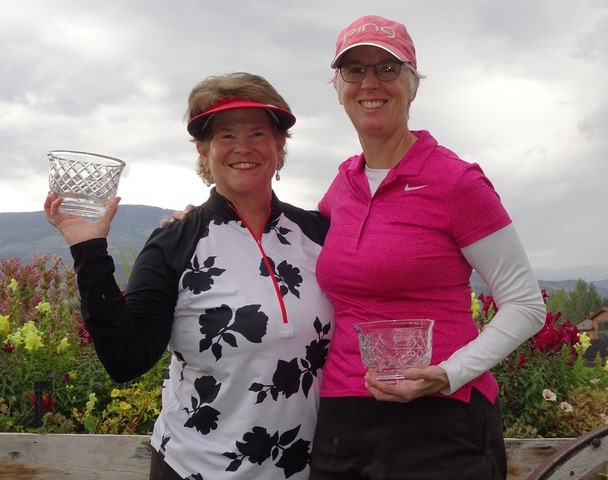 They’ve now done so three times in CGA championships. And given that they’ve won two of those, there definitely seems to be some positive mojo working.

On Sunday, Lyle and Young won their second consecutive CGA Women’s Dunham Chapman, joining D’Ann Kimbrel and Stacey Arnold — who won three in a row starting in 2008 — as the only teams to go back-to-back in the event. (The champions are pictured above, with Young at left.)

This time, after taking a one-stroke lead into Sunday’s final round at Gypsum Creek Golf Course, Lyle and Young trailed playing companions Kathy Malpass of Hiwan Golf Club and Katherine Moore of The Club at Cordillera by one through 14 holes. But a big swing — as in four strokes — took place on the par-5 15th to give Lyle and Young the advantage back for good as they posted a two-stroke victory.

“It’s really surprising,” Young said of repeating as champions. “I really never truly ever felt that I would win a state championship because I started to play golf so late in life — when I was nearly 40. And to win a second time fills my heart. It was really special to be able to repeat.”

Sunday marked the second CGA championship for Young, and the third for Lyle, who was part of a four-person team from Patty Jewett to win the CGA Women’s Club Team title in 2016.

“I didn’t expect to repeat,” Lyle said via email. “I was hoping just to play well enough to prove we can kind of play and last year wasn’t a complete fluke. It was a tough course — mentally challenging. And it was beyond stressful trying to defend. I’ve never been so tired coming off No. 18.”

On the pivotal 15th hole on Sunday, Lyle drained a 20-foot birdie putt, while Malpass and Moore posted a snowman — a triple-bogey 8 — to account for the four-stroke swing.

“No. 15 turned it around,” Lyle said. “It was a perfect ham-and-egg hole. Sandy hit great tee shot, I smoked a hybrid, then Sandy put me 20 feet below the hole and my putt crept in the left side for a birdie. Sandy then hit some great shots coming in to hold the team together.”

Lyle and Young would go bogey-par-par over the final three holes to shoot a 7-over-par 79, giving them a two-day total of 9-over 153.

Malpass and Moore posted a second-round 80 to tie for second place at 155 with Colorado Golf Hall of Famer Christie Austin of Cherry Hills Country Club and Meg Christensen of Cordillera, who carded a second-round 77. Austin has won this event twice with Laurie Steenrod.

“Yesterday we both played quite well,” Young said of Lyle and herself. “I’ve been going through some swing changes and the old swing was popping up today. I did not hit the ball as well today, but Louise played very well.”

Besides pairing up competitively for their 2018 and ’19 victories in the Dunham Chapman, Lyle and Young teamed up for this year’s CGA Women’s Brassie, where they didn’t fare quite so well, tying for sixth place.

While Young hadn’t won a state title until last year, she captured the championship in a worldwide tournament for military spouses and dependents in 2010, and she’s qualified for at least four USGA championships — a Women’s Publinks, Mid-Am and a couple of Senior Ams.

This year’s Dunham Chapman featured seven flights — championship and first through sixth — and gross and net competitions in each.

For all the scores from the Dunham Chapman, CLICK HERE.