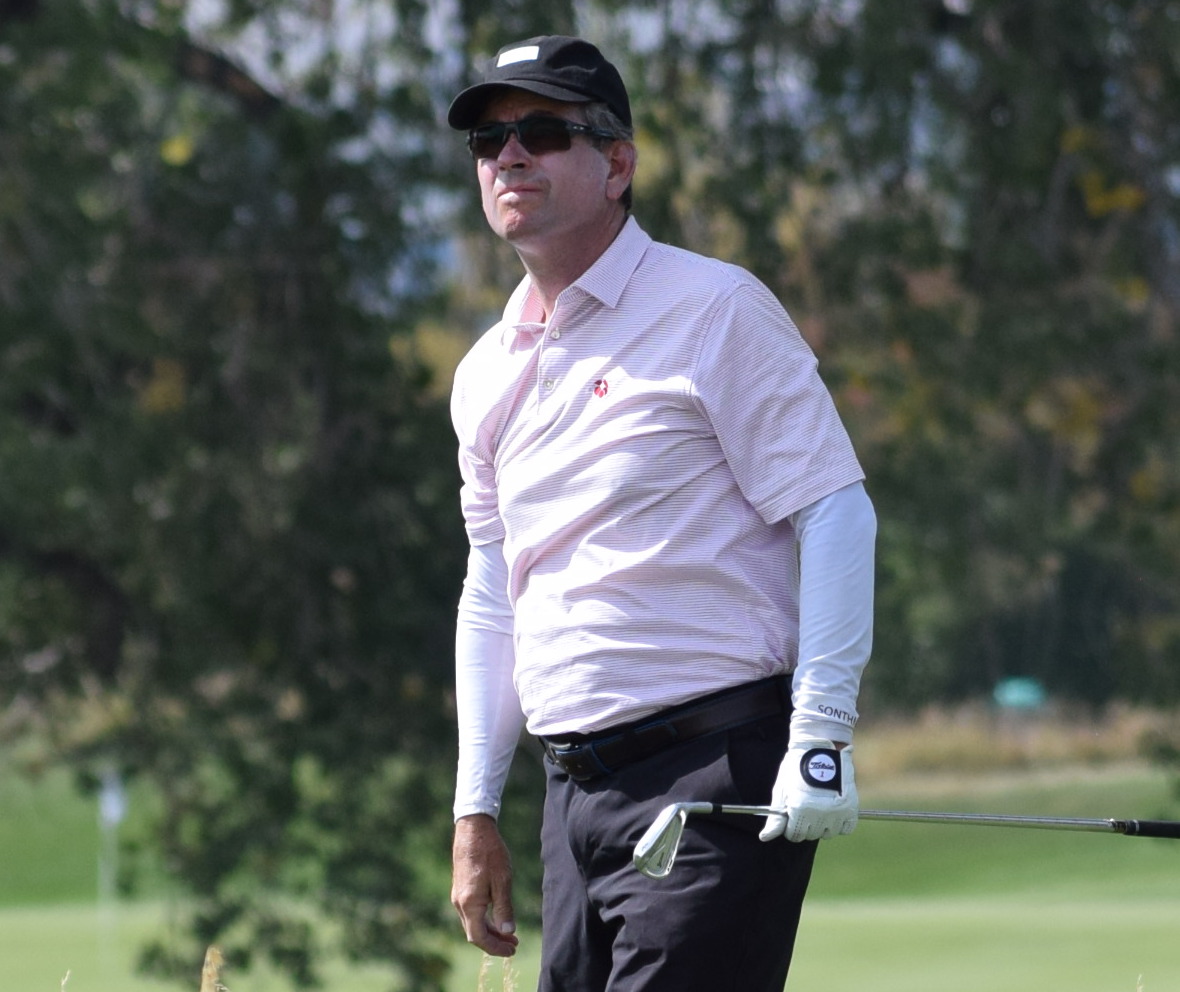 Kent Moore becomes just the second CGA president to have been previously inducted into the Colorado Golf Hall of Fame.

Colorado Golf Hall of Famer Kent Moore becomes president of the board for the CGA, with which he has a long and illustrious history

When Kent Moore first participated in an event conducted by the CGA, Watergate hadn’t yet become a major national story and the Miami Dolphins were still gearing up for what would become their season of perfection (17-0-0) that remains the gold standard in NFL history.

It was the summer of 1972, and the 16-year-old Moore was competing in the CGA Junior Match Play Championship for the first time. A year later, the golfer from Arapahoe High School in Littleton would win the same event.

Since then, Moore has been a regular in CGA championships, to the point that he now estimates he’s competed in more than 150 of them over the last half-century. And in September, when he claimed the trophy at the state Super-Senior Match Play, he won a CGA championship in his sixth different decade.

With such a long — and illustrious — history with the organization, it seems only appropriate that this week Moore was elected the new president of the board for the CGA. He succeeds Janene Guzowski as head of the volunteer board of directors that guides the association, with the CGA staff handling the implementation of policies and overseeing matters on a day-to-day basis.

“I’m just honored,” Moore said this week. “I think I played in my first CGA tournament in 1972, which would have been the year before I won the Junior in ’73. So man, that is a long time. I’ve seen a lot of things happen at the organization, so it means a lot to be president.”

Moore — winner of nine CGA individual championships and three mixed team titles with his wife, Janet — was inducted into the CGHOF in 2004, with Janet having been inducted three years earlier. Janet Moore also served as president of the Colorado Golf Hall of Fame in 2018-19.

“To say (Kent) has some history in Colorado golf … He’s so unique in terms of what he’s accomplished as a competitive player,” said Ed Mate, the CGA’s executive director since 2000. “But more than that, he’s the consummate gentleman. He and Janet are really the ‘First Couple of Golf’ in Colorado. I’m excited to work with him. I’ve been friends with Kent for a long time, and this is a chance to work a lot more closely together.

“He’s at a point in his golf career that he still competes, but he has time to give back, which I think is fun for him.”

But Moore’s involvement with the association goes far beyond his own stellar play. He’s volunteered and served on the CGA board for roughly 16 years, including the last 14, though he operated partially in absentia from 2011 to 2015 when he was the men’s golf coach at Wheaton College in Illinois. Janet headed the Wheaton women’s program at the same time.

In addition, the Moores hosted a centennial kickoff celebration at their home as the CGA turned 100 years old in August 2015. That year, the Moores also served as the honorary chairs for that fall’s Century of Golf Gala at The Broadmoor, where Jack Nicklaus was the featured guest.

Asked why it’s important for him to serve as president of an organization with which he’s interacted for so long, Kent Moore said, “My parents and Janet’s parents always said that you’re not just representing yourself, you were representing other people, including your family, when you played at a golf tournament. And the CGA has as its mission to represent, promote and serve the best interests of golf in Colorado. So I hope, as president, that I can represent golf well, as I’ve always tried to do. That’s my goal — to carry on the good work that the group has done.

“I like golf and I like golf people. Being around them is really fun. That helps. Primarily, I’ve obviously played in a lot of golf tournaments and giving back something would be appropriate. If you enjoy it and it’s the right thing to do, it seems like a good decision.”

Moore becomes president at an interesting time in golf. During the Covid-19 pandemic, during which many other fun activities were shut down for at least a time, golf rounds played in Colorado through the first 10 months of 2020 were up 17 percent compared to 2019, according to Golf Datatech. That’s part of a nationwide trend.

And the million-dollar question is how to keep those numbers up and take advantage of this 2020 trend when Covid-19 is in the rearview mirror.

“Hopefully with some of those people there will be some ‘stickiness’ there,” Moore said. “I’ve always thought one of the things golf needed to do — and hopefully everyone realizes this — is it needs to be more accommodating to everyone. Hopefully with the surge, everyone saw that and people became more and more comfortable with being at a golf course and enjoying it. I’m hopeful that the people of golf will be as accommodating as ever whether you’re a scratch handicapper or a 30 handicap, hoping that you have — and making sure that you have — a good time. I think that’s critical.”

The CGA plays many roles as a leading organization in Colorado golf, with more than 60,000 members. There are the more obvious ones — conducting nearly two-dozen CGA championships/tournaments and qualifying events for 14 USGA championships; managing USGA handicaps in the state; and rating courses. (The CGA is the USGA’s lone Colorado-based Allied Golf Association.)

The CGA also conducts clinics and member play days, and joins the Colorado PGA in running the Junior Golf Alliance of Colorado. And, more generally speaking, the association helps administer golf-related matters in Colorado, interacts with courses and clubs throughout the state, serves as a major resource regarding the Rules of Golf, and provides news about Colorado golf and many other member benefits and discounts.

On top of all that, the CGA owns and operates CommonGround Golf Course in Aurora, which hosts many “for the good of the game” initiatives and high-level tournaments.

Different CGA presidents have varying priorities for their terms  leading the board of directors — which normally last two years. For his part, Moore is happy with the work the association has done and hopes to build upon that.

“I would say primarily not to mess things up,” he said regarding his top priority. “It seems to me there’s great momentum and things continue to improve there in terms of service to golf and service to the community, and all the good things that have happened with CommonGround. We have a staff and board that is responsible for that. It’s something that you don’t want to shake up very much. Kind of let everybody do what they do so well. All the committee chairs have done a great job. My goal would be to let it keep going.

“There’s some challenges, I think, with CommonGround, just in terms of always needing capital to keep it in the kind of shape you want to have it. That will be a priority, but it already is, so there’s nothing unique on my part.”

Moore, a Colorado resident since 1964 though he graduated from Purdue in Indiana after playing college golf there, has had a long career, primarily in the oil and gas industry. He currently serves as executive director at Highlands Ranch-based Resource Energy. And over the years, he’s been a member of quite a few board of directors — including Open Door Ministries, Providence Network, and others business-related and church-related.

On the golf side, from 2004-06 Moore was president and tournament chairman for the Colorado Open Golf Foundation, which administers the CoBank Colorado Open, Colorado Women’s Open and Colorado Senior Open to benefit The First Tee of Green Valley Ranch, LPGA*USGA Girls Golf of GVR and the Colorado PGA Golf in Schools Program.

Moore served in that role in the immediate wake of the Colorado Open not being held in 2003 due to mismanagement by the former organizers. Pat Hamill, founder of the Colorado Open Golf Foundation, revived the tournament and it has been on solid ground ever since, returning to the status of arguably the top state open in the country.

Serving as president of the COGF, “that was an honor and fun to see that come back to life,” Moore said.

And now Moore is set for another memorable chapter in his long and varied golf career.

For a look at the members of the CGA’s volunteer board of directors, CLICK HERE.