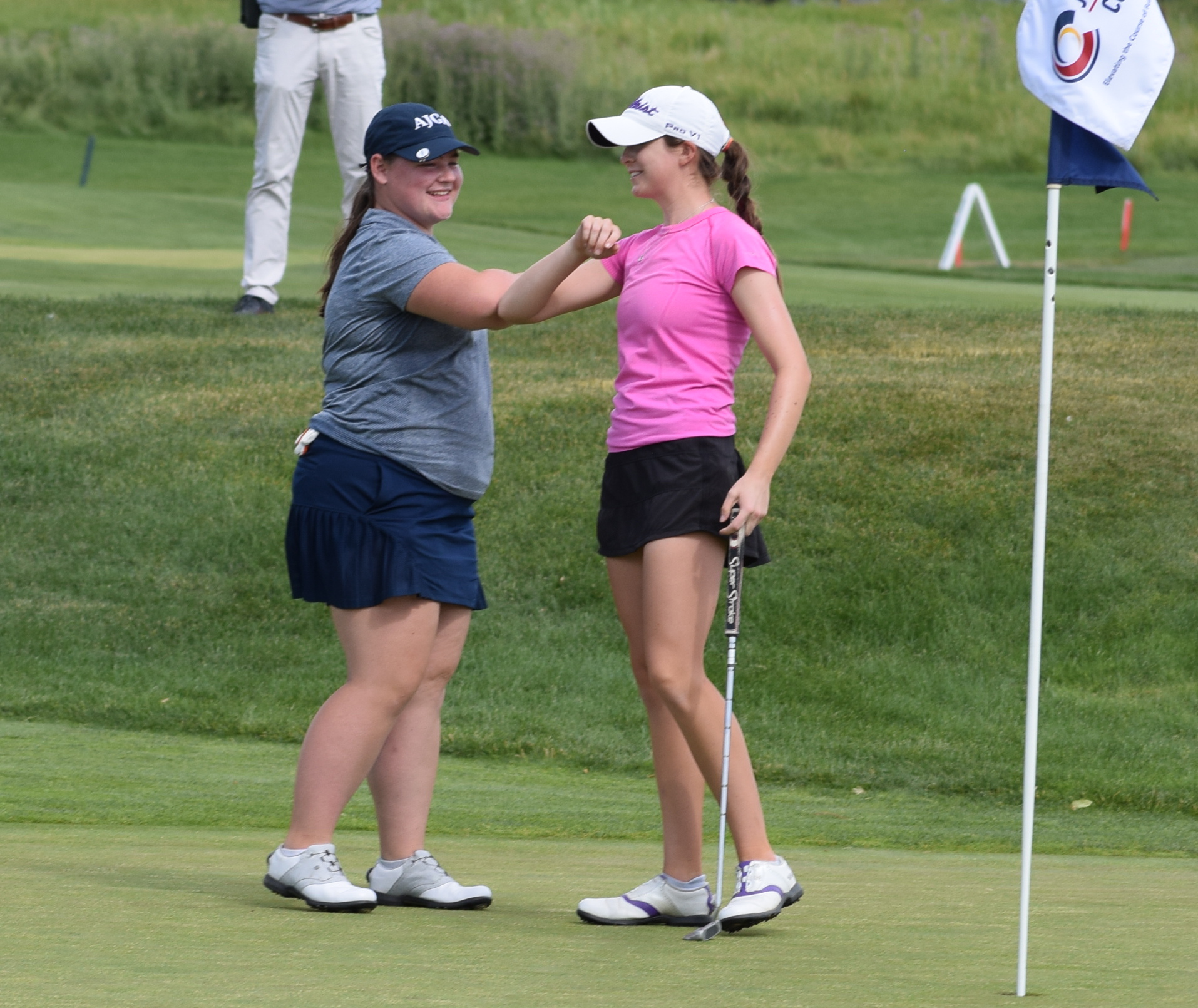 Even in a very unusual year, Junior Golf Alliance of Colorado kept churning out notable and memorable feats

Turning 5 years old is a momentous occasion. That’s no less true for the Junior Golf Alliance of Colorado than for your average kindergartner.

Five years ago this month, the CGA and the Colorado PGA announced they were joining forces in a major effort to bolster junior golf in the state. A few months later, the name for the resulting organization was disclosed — the Junior Golf Alliance of Colorado — and the first JGAC season was held in 2016.

This month, the JGAC’s fifth season concluded, and milestones continue to be reached on a regular basis.

For instance, the alliance now includes 1,755 members. That’s more than double what the JGAC had in 2016 — 838 kids. There are three different levels of membership, and there was such high demand for tournament play that the Series and Tour memberships were sold out in mid-June.

Overall, there are 955 Introductory members, 518 Series members and 282 Tour members. All JGAC memberships come with access to Youth on Course, an ever-growing non-profit program which makes golf more accessible for juniors by capping their cost for a round at $5 at participating facilities.

“In 2020, the demand for junior golf skyrocketed in a way that we love, but couldn’t anticipate,” Ashley Barnhart, the CGA’s managing director of golf operations, said in an email. “Despite the global pandemic, we saw incredible growth in JGAC membership, the desire to play competitive tournaments, and the utilization of Youth on Course. The season wasn’t without its Covid-related challenges, but this growing desire to play provides some exciting insight to the future success of the game.”

As was the case with many things in life this year, Covid-19 had considerable effect on the JGAC. Among other things, the tournament season didn’t start until early June — two months after originally planned.

Let’s look back on some of the highlights — and just plain oddities — of a unique JGAC season:

— While all four of the JGAC major championships were played in 2020, many of the most prestigious international, national and regional events in which top-level junior golfers aspire to compete were canceled due to novel coronavirus-related safety concerns.

Most notably for Colorado, that included the U.S. Girls’ Junior Championship, which had been scheduled for July at Eisenhower Golf Club at the Air Force Academy. The 2020 U.S. Girls’ Junior was supposed to be the first time a U.S. military course would host a USGA championship. And in another departure from the past, the Junior Golf Alliance was to have served as the “host group” for the championship, partnering with the USGA in many respects.

— Speaking of lost opportunities, Hailey Schalk of Erie was hoping to become the first four-time Colorado state high school individual golf champion — girls or boys. But she’ll have to settle for winning the event three times — along with Lynn Ann Moretto (1995, ’96 and ’97) and Ashley Tait (2002, ’04 and ’05) — after the 2020 girls championship was canceled due to Covid-19.

— JGAC member Aubri Braecklein of Northglenn made a little history in June by winning the CGA Women’s Stroke Play at age 17 as she became the youngest winner of that event in more than a dozen years, before which detailed records weren’t kept.

Braecklein would go on to be named the JGAC Girls Player of the Year, while Hunter Swanson of Denver was the Boys Player of the Year. To see more details on their 2020 accomplishments, see the list of JGAC award winners and honorees below.

— This year was an unusual one as far as the number of JGAC major winners that were crowned. More often than not, at least one player wins more than one major in a year. But between the boys and the girls, there were eight different major champions in 2020:

It should be noted that both Hillary and Bryant had won JGAC majors in previous years.

— In the spring, Max Lange of Golden accomplished one of the most odds-defying feats of 2020 in Colorado golf as the 16-year-old made two holes-in-one in three holes at Green Valley Ranch Golf Club’s par-3 course. Oh, and by the way, Lange recorded the two aces insides a half-an-hour after never having made a hole-in-one before.

— After having the U.S. Girls’ Junior canceled off the course’s 2020 schedule, Eisenhower Golf Club at the Air Force Academy ended up hosting the last two JGAC majors of the year. The Blue Course did the honors for the Colorado Junior Match Play and the Silver for the JGAC Tour Championship, which was limited to one round after high winds canceled the final day’s action.

— Ashleigh Wilson went where no Colorado junior golfer had gone before when she won the 11-13 Girls Series Championship in August. After claiming the Girls 10 & Under Series Championship three times, Wilson became the first player — regardless of age — to capture four JGAC Series Championship titles. She had shared that distinction with three-time champs Kupcho, Somin Lee, Coby Welch and Andre Dumonteil.

— Speaking of Schalk, the current CU golfer had a stellar two-month run in tournament play. In early August, she won the final AJGA tournament in which she’ll compete, the AJGA Junior at Southpointe. Shortly thereafter, she teamed with Erin Houtsma to win the CGA Women’s Brassie Championship. In September, Schalk paired with CU teammate Alisha Lau to qualify for the 2021 U.S. Women’s Amateur Four-Ball Championship. And early this month, she won the Colorado National Women’s Amateur.

— Swanson, a third-year member of the Hale Irwin Player Program based at CommonGround Golf Course, had a strong showing in early August at the High School Golf National Invitational at Pinehurst Resort in North Carolina. The junior at Northfield High School tied for 18th place out of a boys field of 235.

— In one of the more exciting finishes for a Colorado boys state high school tournament, Valor Christian senior Lucas Schulte eagled his final hole as a high school player to win the 5A individual title by one stroke and give his school the team title by two.

— In an event delayed by a few weeks by an early-September snowstorm, Junior Golf Alliance staffers and supporters took part in an inventive — though very taxing — fundraiser for Youth on Course, which limits the cost for junior golfers to $5 per round at participating facilities. Eight players teed it up for the 100 Hole Hike at CommonGround Golf Course, taking roughly 10 hours and walking more than 20 miles for their marathon of golf. The event raised more than $23,000 for YOC.

Below are the Junior Golf Alliance of Colorado honorees and award winners for 2020:

Players of the Year

Boys — Hunter Swanson of Denver: The junior at Northfield High School is in his third year as part of the Hale Irwin Player Program at CommonGround Golf Course. … He finished runner-up in the Colorado Junior Amateur, fifth in the JGAC Tour Championship, sixth in the Colorado Junior PGA and ninth at the Colorado Junior Match Play. … He won two JGAC tournaments in 2020. … Finished 18th out of a boys field of 235 at the High School Golf National Invitational at Pinehurst Resort in North Carolina. … In the 4A boys state high school meet, he tied for sixth place.

Most Improved Players of the Year

Boys — Pratham Parmar of Greenwood Village: In 2020, he recorded almost an eight-stroke improvement in his scoring average compared to 2019. This year, he averaged 79.7 and finished second on the boys 14-18 Series. Last year, his JGAC norm was 87.4.

Award of Excellence (based on community service, character, overcoming hardship and showing spirit of the game of golf)

Braden Wedel of Bethune: Wedel lives in an area where golf opportunities are limited. The person who nominated him noted, “The courses in Burlington and Stratton are only 9-hole buffalo grass-fairway courses, with minimal challenges like sand, water and fast greens that are present on JGAC courses. But Braden was still able to post three good scores including +9, +8, and +4 at JGAC events.” Braden plays 6-man football, holds officer positions in school leadership organizations and owns a 4.0 grade-point average. He played a key role in getting Stratton High School to start a sanctioned golf team.

Aubri Braecklein of Northglenn: The high school senior was named the JGAC Girls Player of the Year for 2020 (see above). She’s played in the JGAC since 2019 and is a 2020 JGAC Academic All-Star.

Elan Fleetwood of Parker: The high school senior has competed in the JGAC since 2017 and played in 13 events this year, winning two. She’s a 2020 JGAC Academic All-Star.

Grace Ha of Westminster: The high school senior has played in the JGAC since 2016 and competed in 11 events this year, placing as high as second. She’s a 2020 JGAC Academic All-Star.

Rachel Penzenstadler of Littleton: A high school senior, Penzenstadler has playedin the JGAC since 2017 and competed in a dozen tournaments this year, with two third-place finishes. She’s a 2020 JGAC Academic All-Star.