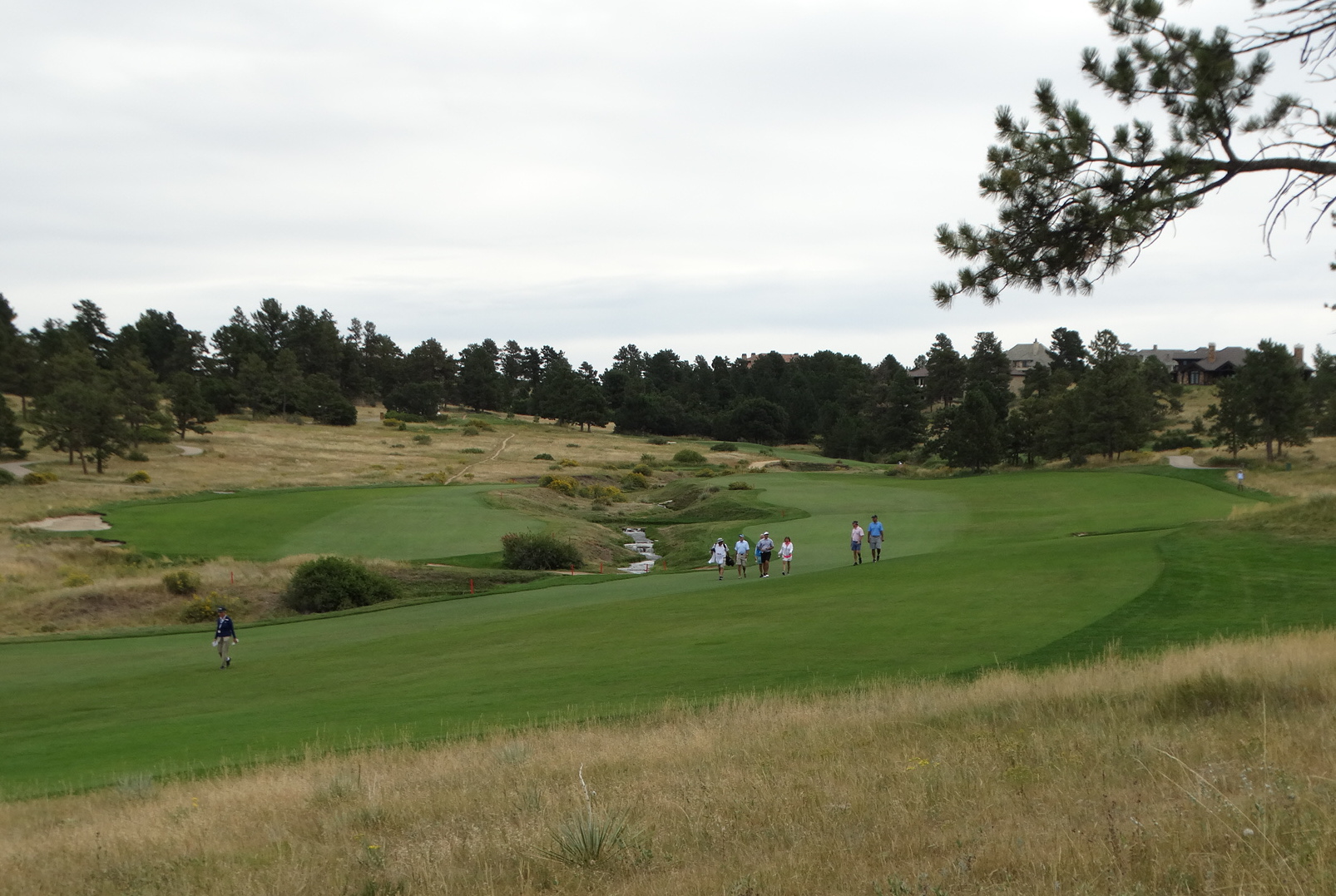 The men's and women's CGA open-age match play winners will be crowned at Colorado Golf Club on June 12.

Major events, big tournaments, notable happenings that are on tap — or could be — for 2021 in Colorado golf

Especially this time of year, it’s worthwhile to peer into the future, hoping for the best while preparing for something less.

And such is the case with golf also. As a new year dawns, it’s useful to take a look at what awaits — both things firmly on the schedule, and those that could be in the works.

So let’s consider some of the major events, newsworthy items and changes that await us in Colorado golf in 2021.

— Most of the 2021 CGA championship schedule is set. The association’s 121st Match Play Championship is.planned for June 7-12 at CommonGround Golf Course and Colorado Golf Club (see more on that just below). And the CGA Amateur will be conducted roughly two weeks earlier on the calendar than usual, as it’s set for July 15-18 at the Country Club of Colorado in Colorado Springs. It’s the first time the Amateur has be held in the Springs since 1983, when The Broadmoor served as host. In fact, the Amateur was contested three consecutive years in Colorado Springs starting in 1981, when future U.S. Open champion Steve Jones won at the CC of Colorado.

On the women’s side, the 106th CGA Women’s Match Play will be held concurrently with the CGA Match Play June 7-12 at CommonGround and Colorado Golf Club. That same month, the CGA Women’s Stroke Play is set for Boulder Country Club June 25-27. The last time BCC hosted thee Women’s Stroke Play was in 2002. Regarding the Women’s Match Play, this will mark the first year of a plan to play the Women’s Match Play and the Match Play concurrently and at two different sites. This year, after early-round matches are played at CommonGround, the quarterfinals, semifinals and finals for both events will be conducted at Colorado Golf Club, which has hosted the 2019 U.S. Mid-Amateur, the 2013 Solheim Cup and the 2010 Senior PGA Championship. Both title matches will be conducted on the same day, meaning two major state amateur champions will be presented their trophies at roughly the same time.

As for other significant regional open tournaments based in Colorado, the Navajo Trail Open is scheduled for June 18-20 at  Hillcrest in Durango, while the Rocky Mountain Open is set for Aug. 20-22 at Tiara Rado in Grand Junction. The Navajo Trail wasn’t held in 2020, but the RMO was.

— Regarding individual achievements that may be on the horizon in Colorado golf, Colin Prater of Colorado Springs will be looking to win his third consecutive CGA major when the Match Play rolls around June 7-12 at CommonGround and Colorado Golf Club, while Steve Ivan of Colorado Springs will seek his third straight senior major title as Black Bear Golf Club in Parker hosts the Senior Match Play June 21-25. And Colorado Golf Hall of Famer Kim Eaton is looking for her 26th CGA/CWGA women’s championship title, which would set a record. On the professional side, Geoff Keffer will be seeking to match the record of Bob Hold for number of times being named the Colorado PGA’s Dow Finsterwald Player of the Year (with seven). And Doug Rohrbaugh will be looking to break his own record by being named the CPGA’s Senior Player of the Year for the seventh time.

— On the “we’ll see” side of things, it will be fascinating to observe if the golf business continues to go gangbusters this year. With Covid-19 safety concerns leaving golf in a good position among entertainment options as it’s played outside and social distancing is relatively easy, play soared starting in the spring. Nationwide, through November, rounds in 2020 were up 13.1 percent compared to the same period in 2019, according to Golf Datatech. And that trend was even stronger in Colorado, where rounds surged 19.6 percent in the first 11 months of 2020. With a vaccine being distributed, things figure to eventually get back to near normal, so it’s up to those in the golf industry to help keep the momentum going by making players feel as welcome as possible.

— The Solheim Cup and the Olympics normally make for good TV, and it’s possible spectators from Colorado could have a particular rooting interest in those events in 2021 as Colorado-born-and-raised Jennifer Kupcho might be in the running for U.S. spots in those competitions. Kupcho could land a berth in the Olympics in Japan in early August by being ranked in the top 15 in the world as of June 28 (she’s currently No. 19, fourth among Americans. Note: a maximum of four female players per country is allowed). And for the Solheim Cup, set for Sept. 4-6 in Toledo, Ohio, Team USA will be made up of the top eight players from the American Solheim Cup points list, the top two golfers from the Women’s World Rankings (not in the first eight in the Solheim standings), and two captain’s picks.

— Colorado golf’s first Environmental and Economic Impact Study since 2002 figures to be finalized and made public by springtime. The idea is to have updated information — conducted by a third party — with which to inform lawmakers and policymakers about golf on the state and local level, and to advocate for the game in general. Surveying and data collection for the study have already completed, and analysis was in the final stages as of early November.

— As for highlights of the 2021 USGA qualifying schedule, which was largely canceled in 2020 due to Covid-19: 36-hole U.S. Women’s Open qualifying, which sends the top finishers directly to the premier women’s tournament in golf, will be held May 10 at The Ranch Country Club in Westminster. Local qualifying for the U.S. Open, the first of a two-stage qualifying process, will take place May 4 (Collindale in Fort Collins), May 10 (Walnut Creek in Westminster) and May 13 (CommonGround in Aurora). And U.S. Senior Open qualifying is scheduled for May 18 at the Jack Nicklaus-designed Country Club of the Rockies in Edwards, west of Vail. For the overall plan for men’s USGA qualifiers, CLICK HERE. For women’s USGA qualifiers, CLICK HERE.

— After a year without an induction ceremony in 2020 — a first since the early 1970s, due to Covid-19 — the Colorado Golf Hall of Fame hopes to hold that event sometime in 2021, likely in the latter half of the year. If it comes to fruition, it’s hoped that the 2020 inductee (Russ Miller) and the 2021 one (Ed Oldham) will be celebrated. The CGHOF tournament is tentatively planned for June 1 at Colorado Golf Club in Parker.

— The Colorado Cup Matches, where many of the best amateurs and club professionals in the state square off in a Ryder Cup-like competition, is planned to be held for the first time since 2019, though a site and dates haven’t yet been set. In 2019, the CGA’s amateur squad — consisting of open and senior division men and open division women — defeated the pros 23-17 at The Broadmoor.

— After no AJGA events were held in Colorado in 2020, three are scheduled in 2021 with the addition of a new tournament in Montrose. He’s the lineup: AJGA Aspen Junior All-Star, Aspen Golf Club, June 8-11 (qualifier June 7); AJGA Hale Irwin Colorado Junior, Walnut Creek Golf Preserve in Westminster, June 14-17 (qualifier June 13); and the AJGA Junior Open at The Bridges, presented by the City of Montrose, The Bridges Golf & Country Club, Aug. 2-5 (qualifier Aug. 1).

Resuming in 2021 after being canceled in 2020 are qualifying events for the 2022 Drive Chip & Putt national finals, the 2021 IMG Academy Junior World Championships (July 12-16 in the San Diego area), the 2021 Optimist International Junior Golf Championship (three weeks in July in Miami) and the 2021 boys (July 12-15 in Lexington, Ky.) and girls (July 27-30 in Louisville, Ky.) Junior PGA Championships.

— Besides USGA qualifying tournaments returning in 2021 in a big way — assuming things don’t take a considerable turn for the worse on the Covid-19 front — there are plenty of other significant tournaments in which Coloradans regularly compete that are back on the schedule. That includes the second Augusta National Women’s Amateur (March 31 and April 1 and 3), to which University of Denver golfer Anna Zanusso will be invited, provided she remains an amateur. Meanwhile, the girls state high school tournaments, which were canceled in 2020, are tentatively scheduled to be held June 21-22 this year. With all the changes to the high school sports season during the 2020-21 school year, the state golf meets will take place roughly a month later than usual. The 5A tournament is planned for City Park Golf Course in Denver, the 4A at CommonGround, and the 3A at Elmwood Golf Course in Pueblo.

— Sometime this year, it wouldn’t surprise anyone if a future U.S. Girls’ Junior Championship is scheduled for Colorado — very possibly Eisenhower Golf Club at the Air Force Academy in 2023, the next year for which a site for the USGJ has yet to be announced. The 2020 U.S. Girls’ Junior had been set for Eisenhower until Covid-19 led to the cancellation of most of the USGA championships last year.

— After no fall schedule was played by the nine Colorado-based NCAA Division I golf teams in 2020, DI action will return for the “spring” season, which starts in just a couple of weeks. First up will be the University of Denver women competing in a “Match in the Desert” Jan. 24-25 in Arizona, facing the University of Arizona, Arizona State and UCLA. The DU men also get going in January — Jan. 25-27 at the Arizona Intercollegiate in Tucson. And, unlike last season, when things were shut down for good in March, this one is expected to culminate with the NCAA Championships late in the spring.

— The TPC Colorado Championship at Heron Lakes, which last year concluded on Independence Day, will return to its “traditional” slot this year at TPC Colorado in Berthoud. The Korn Ferry Tour event is planned for July 8-11, with Monday qualifying taking place on July 5 at Highland Meadows and a second site to be determined. At the end of the combined 2020 and ’21 Korn Ferry Tour season, the top 25 performers in the regular season will earn PGA Tour cards, with 25 more up for grabs during the 2021 KFT Finals.

— As for the Colorado PGA’s most prestigious tournament, the Colorado PGA Professional Championship is set for Sept. 13-15 at Eisenhower Golf Club’s Blue Course at the Air Force Academy.

— Caddying via the new Broadmoor Caddie & Leadership Academy was scheduled to begin in 2020, but Covid-19 concerns nixed that plan. Now the hope is to start looping in 2021 — if Covid protocols allow it this summer. Caddie training is expected to start in April, according to Mark Kelbel, the program director. The BCLA is an offshoot of the highly acclaimed Solich Caddie & Leadership Academy that has taken root at CommonGround, Meridian and in Grand Junction.

— For the first time in the history of the Denver Golf Expo, which dates back to the 1990s, the event won’t be one golfers can attend in person. Covid-19 will preclude that, but a virtual CyberExpo is planned for March 12-13

— For elite-level golfers, Q-school will be back on the schedule in 2021 after being nixed in 2020 — at least for the very top level of tours — due to Covid 19 interruptions. First up is qualifying for PGA Tour Canada, with seven tournaments set between Feb. 23 and May 27. The Canadian circuit saw its 2020 season canceled. Later in the year, hopefuls will tee it up for LPGA and Korn Ferry Tour qualifying.

All told, it’s going to be a very busy and eventful year in Colorado golf.