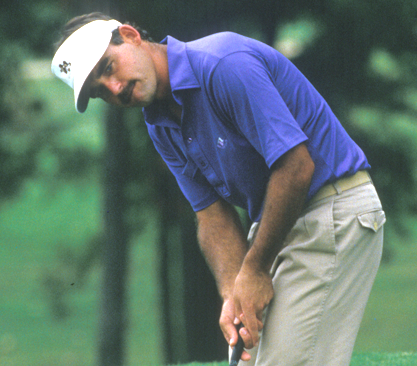 (Note: This is the first in an occasional series of U.S. Mid-Amateur articles that will appear on ColoradoGolf.org leading up to the national championship for players 25 and older being held at Colorado Golf Club and CommonGround Golf Course Sept. 14-19.)

It should go without saying that winning a USGA national championship is no easy task. And that’s even more the case for a resident of Colorado, where the population isn’t huge — relatively speaking — and trying to play golf year-around can be problematic.

All that said, when lifelong Coloradan Bill Loeffler was departing for the U.S. Mid-Amateur in the fall of 1986, his father-in-law, Ron Moore, made a bold prediction.

“It’s weird,” Loeffler said last week in reflection. “My father-in-law, Ron Moore, told my wife that he thought I was going to win the tournament when I was leaving for Mississippi, just because we had played a couple of times together.”

And, sure enough, Moore proved prescient regarding Loeffler, now a member of the Colorado Golf Hall of Fame, like Moore. Loeffler, then 30, would go on to win the 1986 U.S. Mid-Am, which drew 2,511 entrants. The event was played at Annandale Golf Club in Madison, Miss., a Jack Nicklaus-designed course that hosted a PGA Tour event for 20 years until 2014. Loeffler defeated Georgian Charles Pinkard 4 and 3 in the scheduled 18-hole championship match on Oct. 9, 1986.

Loeffler (above in a USGA photo from the ’86 championship) remains the only Coloradan to have won the U.S. Mid-Am, which dates back to 1981.

As much as Loeffler has accomplished in the game — he’s also won three Colorado Opens (tied for second-most ever, behind Dave Hill), the 1992 national PGA Assistant Professional Championship, the 2007 Senior PGA Professional National Championship, a Colorado Senior Open, a CGA Amateur and three Colorado PGA Section Champioships — he points to the 1986 U.S. Mid-Am victory as the most meaningful in his long career.

“It’s probably the best accomplishment I can think of — only because of what the Mid-Am did for me,” said Loeffler, now 62. “Not only was it a USGA championship, but it got me on the Walker Cup team (in 1987) and then into the Masters (in 1988). It was a springboard. Anytime a golfer gets a chance to win a USGA event, it’s a pretty big deal. I can’t think of anything bigger” that he’s accomplished in golf.

Indeed, though the U.S. Mid-Am victory didn’t automatically earn him a spot on the Walker Cup team or into the Masters back then, that was the de facto result of his victory in Mississippi. Coloradan M.J. Mastalir, then a member of the USGA Executive Committee, pushed for Loeffler’s inclusion on the 10-man Walker Cup team, and Loeffler ended up going 2-1 individually as the U.S. routed Great Britain & Ireland in the matches in England.

At the ’86 Mid-Am, Loeffler rode a very hot Ping putter to the title. Besides defeating Pinkard in the final, Loeffler topped one of the world’s top amateurs at the time, Randy Sonnier, 3 and 2 in the semis. Sonnier was a finalist — losing to Jay Sigel — and a stroke-play co-medalist the only previous time the U.S. Mid-Am has been contested in Colorado, in 1983 at Cherry Hills Country Club.

“That week I was really on my game,” Loeffler said of the ’86 Mid Am. “I remember putting just out-of-the-planet good. It was a great golf course, good on my eye and I was just making everything. I got past (a couple of past Walker Cuppers in match play) and I was pretty thrilled with that because I knew they were the cream of the crop in amateur golf.”

Asked specifically about the final against Pinkard, Loeffler (left in a USGA photo) said he has few specific recollections.

“I just remember being in a fog the whole finals, like it didn’t matter what he did or where I hit it, I kind of knew I was going to win,” Loeffler said. “And it was WEIRD. I used to get pretty volatile, but that day it was just surreal, like I was floating through the match and it didn’t matter what he did. If he’d have thrown three birdies at me, it wouldn’t have mattered.”

Loeffler’s 4 and 3 victory ties for the second-most-lopsided margin in an 18-hole U.S. Mid-Am final. He only had to play the 18th hole once in the match-play portion of the event. And at 30, he was the event’s youngest champion at the time.

Loeffler knew something special might be in the works during the practice days — specifically when he got into a putting contest on the practice putting green with fellow former Arizona State University golfer Dennis Saunders.

“We spent a couple hours on the putting green,” Loeffler recalled. “Honest to God, I started making these putts — 50 feet, 30 feet, 20 feet. I was like, ‘What in the world is going on here?’ But they just started pouring in. We got done and Dennis said, ‘I have never, ever seen you putt like this before.’ I said, ‘I don’t know what’s going on but I’m going to try to keep this feeling for the whole week.’ And it worked.”

In fact, that Ping putter worked so well that week that the manufacturer — as has been the case since the 1970s for each major victory with a Ping putter — made a gold-plated putter with the exact specs of the one used to win the tournament and stored in a company vault at Ping headquarters in the Phoenix area.

While his putting was spot on that week, Loeffler had to manufacture a tee-to-green game to a certain extent.

“I remember getting down there and being unable to hit a draw, no matter what I was doing,” he said. “In the practice rounds playing with a couple of my ASU teammates, I finally just decided, ‘You know what? I’m not even going to fight it. I’m just going to aim down the left side and cut it — just let it work that way.’ And of course on a Nicklaus course if you cut it, sometimes it’s an advantage. I did that all week — hit this ugly kind of cut/slice thing, hit a bunch of greens and putted great. For the life of me, I couldn’t turn the ball over right to left.”

Even after winning the national title, Loeffler was frustrated with that situation to the point that he rectified it within a few days of returning to Colorado.

“When I got home from the championship, I went down to Castle Pines into their club room and decided I didn’t like the shafts in my irons so I reshafted all of them,” he said. “I was so mad I couldn’t turn the ball over. I figured it had to be the shafts; it couldn’t be me. It was just impetuous and stupid.

“I was in the club repair room and Keith Schneider (then the PGA head professional at Castle Pines) and Jack Vickers (the club founder) were having a meeting. Of course, when you change shafts you have to heat the shafts up a little bit. So I set off the smoke alarm in the clubhouse with Vickers and Keith in there in a meeting. Keith comes and just looks at me, shook his head and walked away.”

Loeffler’s golf career has been an unusual one given that he’s gone from amateur to pro to amateur to pro. After winning a state high school title at Cherry Creek, a CGA Junior Match Play and CGA Amateur in Colorado before becoming an All-American at ASU, Loeffler turned pro the first time and made it to the PGA Tour. He competed on golf’s top circuit in 1980, ’81 and early ’82, playing in 32 events. But he made only eight cuts and $5,356 during that time.

“I had a plan and got on Tour,” Loeffler said. “I set some goals and wasn’t achieving them. I wanted to kind of get on with my life, I wanted to get married to Sandy. She had her job and she wasn’t traveling with me. I stopped enjoying playing golf and I wasn’t getting better. I kind of decided, I love the game, but there’s something else to do. … It was time for a change.”

So even though he had some PGA Tour status remaining in 1982, he decided after playing poorly in U.S. Open qualifying that he’d start the process for regaining his amateur status. Three years later, he was an amateur again and played in the CGA Match Play — where he lost to eventual champion, and now longtime PGA Tour/PGA Tour Champions player, Brandt Jobe — and in the CGA Amateur.

In 1986, Loeffler won the U.S. Mid-Am, then captured the inaugural CGA Mid-Amateur title and a third Broadmoor Men’s Invitation victory the next year. But after playing on the ’87 Walker Cup team and in the ’88 Masters as an amateur — where he shot 77-79 and missed the 36-hole cut — Loeffler returned to the professional ranks in 1989, this time on the club professional side of things.

“I remember playing in the Pacific Coast Amateur in Seattle and I was pretty much broke,” he said. “It had cost say about $1,000 to play it. I finished second or third to Billy Mayfair. I was sitting at the podium and they gave me a medal about the size of a half-dollar. I looked at it and I’m like, ‘I’m starving to death, my wife thinks I’m a loser and I’ve got this half-dollar medal. I realize now my whole life is centered around golf, so it’s time for another change.’ I went back and said, ‘Sandy, I’ve got to turn pro.’ And she supported me, like she always has.”

During this second stint as a pro — which has lasted the last 30 years — Loeffler has been an owner of The Links Golf Course in Highlands Ranch and Moore, Loeffler, wife Sandy and their family built and operated the Hale Irwin-designed Highlands Ranch Golf Club from its opening in 1998 until 2011, when it was gifted to the University of Denver. And obviously Loeffler has accomplished plenty as a competitor.

But Loeffler (left in a CGA photo in 2018) has been hampered by a bad back for quite a while now, to the point that he believes his days of competing in multi-day tournaments may be behind him.

“It’s hard for me to be able to play two rounds in a row, so I think I’m pretty much done (from a competitive standpoint),” he said. “It’s my back. It gets real weak after about 12 holes. (After) two or three days, I’ve got to go on some pain meds, and I hate doing that. It’s just time. Fifty years of competing, that’s plenty. I think I’m done.”

But Loeffler still enjoys rounds of casual golf with wife Sandy, who has taken up the game, and friends.

And if his days competing in major events is indeed done, Loeffler has put together a stellar resume, including the 1986 U.S. Mid-Am title. And he’s happy to see the event returning to his home state this year.

“It’s tremendous. And to have it at Colorado Golf Club, one of the best clubs in the state, just a great golf course, it doesn’t get any better than that,” he said. “And it’s a great match play course with those finishes on those par-5s, 15 and 16. It’s going to be tremendous. I’m sure the field will be chock-full of ex-pros that are just great players. And in September, it’ll be perfect (weather-wise).”