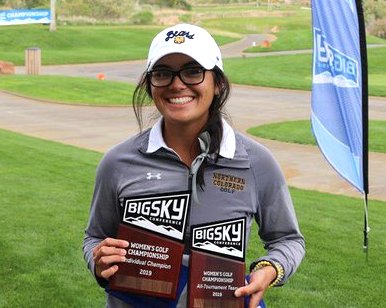 April proved to be a very good month for University of Northern Colorado golfer Beah Cruz.

Less than two weeks ago, the sophomore from Vacaville, Calif., posted the best finish of her college career, placing second in the Wyoming Cowgirl Classic.

And on Sunday, she did herself one better by winning the individual title at the Women’s Big Sky tournament in Boulder City, Nev. The individual win was just the eighth in UNC women’s golf history — and the third by a Bear in the Big Sky meet.

Cruz, who led by two going into the final round of the tournament, went 69-73-73 for a 1-under-par 215 total. Then she defeated Sacramento State’s Corinne Viden with a par on the first hole of a playoff to earn the outright title.

For the week, Cruz carded eight birdie and seven bogeys.

Also posting a top-five finish from UNC on Sunday was junior Marisa Hisaki, who tied for fifth at 218.

As a team, UNC placed third in the 11-school field. The Bears recorded a 27-over-par 891 total for three rounds, ending up 24 strokes behind champion Sacramento State.