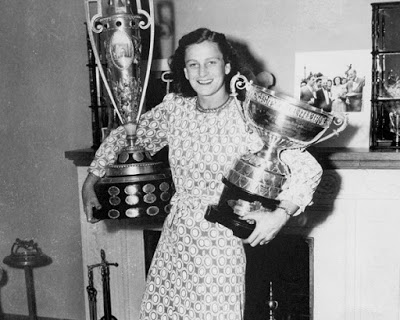 Babe Zaharias accumulated many trophies over the years, including winning 17 straight tournaments during her time living in Colorado.

Two women who won major championships in Colorado, including one who was a prominent citizen in the Denver area during the 1940s, received Presidential Medals of Freedom on Thursday from President Trump.

The event, held in the East Room of the White House, “went off without a hitch,” one of the guests told GolfChannel.com as the proceedings were closed to the media. The presentations came a day after rioters breached the Capitol building in Washington D.C.

The Medal of Freedom is the nation’s highest civilian honor. It’s awarded by the U.S. president “to individuals who have made exceptional contributions to the security or national interests of America, to world peace, or to cultural or other significant public or private endeavors.”

As for Zaharias, she was a celebrated resident of Edgewater in the 1940s.

Zaharias, winner of two Olympic gold medals in track & field, was six times the Associated Press’ Female Athlete of the Year, and several of those awards were won while Babe and her Pueblo-born husband, George, lived in Colorado. They moved to to the state in 1943. According to the Colorado Women’s Hall of Fame, Babe “became a special consultant to Judge Philip B. Gilliam of the Denver Juvenile court, working with disadvantaged children.”

Zaharias won the 1946 Women’s Trans-Mississippi at Denver Country Club and captured the U.S. Women’s Amateur title the same year. She captured U.S. Women’s Open championships three times from 1948 through ’54. And in 1947, she traveled to Scotland and became the first American to win the British Ladies Amateur.

When Babe and George Zaharias subsequently returned to Denver, they were given a 250-pound, 15-foot-tall key to the city. Some dubbed her “Denver’s Queen of the Fairways”.

During the 1946 and ’47 seasons, Zaharias won an amazing 17 consecutive tournaments while representing Park Hill Country Club. The streak started with the 1946 Women’s Trans-Miss in Denver, followed by the Women’s Broadmoor Invitation and culminated with the 1947 Broadmoor Match Play.

Zaharias didn’t hesitate to compete against men as well. For instance, she finished third in the 1946 Rocky Mountain Open in Grand Junction as an amateur and competed in 1950 as a pro.

Zaharias, who was a regular at Lakewood Country Club during her years in Colorado, captured one of her major championships in her adopted home state. She defeated Peggy Kirk 5 and 3 in the finals of the Women’s Western Open at Cherry Hills Country Club in 1950 to claim her fourth and final title in the event, the first three having come as an amateur. She swept the three women’s golf majors in 1950.

In addition to the Women’s Western Open, tournaments Zaharias won in Colorado include the 1946 Women’s Trans Miss and three consecutive Broadmoor Ladies Invitations starting in 1945.

Zaharias, one of the founders of the LPGA, finished with 36 professional victories on the LPGA Tour, including 10 majors, before dying of cancer in 1956 in her native state of Texas. She’s part of the inaugural class of the Colorado Golf Hall of Fame, being inducted in 1973. A year later, she became just the second female to go into the Colorado Sports Hall of Fame, following Olympic gold medal-winning figure skater Peggy Fleming, who was inducted in 1970.

Also, the USGA posthumously presented Zaharias with the Bob Jones Award, which recognizes an individual who demonstrates the spirit, personal character and respect for the game exhibited by Jones, who won the Grand Slam in 1930 and nine USGA championships in all.

As for Player, the South African won 24 times on the PGA Tour, including nine major championships.