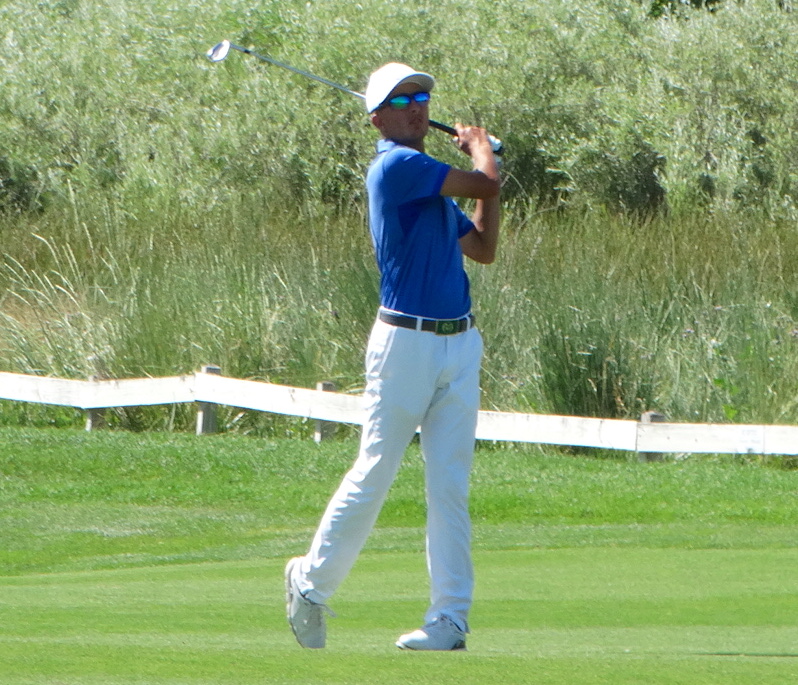 CSU’s Bryant grabs lead with 65 at CGA Amateur; Irwin, Jones, Reid tied for second after round 1

Davis Bryant of Green Valley Ranch Golf Club, who recently finished second in the low-amateur competition at the CoBank Colorado Open, put himself back in contention immediately on Thursday in the opening round of the CGA Amateur at Lakewood Country Club.

The Colorado State University golfer (pictured) made seven birdies — including three straight starting on No. 12 — and shot a 6-under-par 65, which is good for a two-stroke advantage with three rounds remaining.

Bryant, a sophomore-to-be at CSU, enjoyed considerable success as a junior golfer in Colorado, winning four Junior Golf Alliance of Colorado majors and being named the JGAC Boys Player of the Year in 2017.

A total of 10 players broke par on Thursday at Lakewood CC, which is hosting this championship for the fifth time since 1999.

Irwin — son of World Golf Hall of Famer Hale Irwin, who won the CGA Amateur three times in the 1960s — birdied his first three holes on Thursday and was 4 under par after five. Steve Irwin won the 2004 CGA Match Play and was the association’s Player of the Year that season.

Jones, who will begin his University of Denver golf career next month, eagled the par-4 first hole on Thursday and added four birdies to go along with two bogeys.

Reid played his final eight holes in 4 under par in round 1.

Tied for fifth place at 69 after the first round are DU golfer Jackson Solem of The Fox Hill Club and Sam Marley of South Suburban Golf Course.

Josh McLaughlin of the Olde Coure at Loveland, who won the CGA Match Play title in June, opened with a 71, good for a share of 11th place, after going 4 under par for his final seven holes.

The field will be cut from 84 to the top 40 players and ties after Friday’s second round.