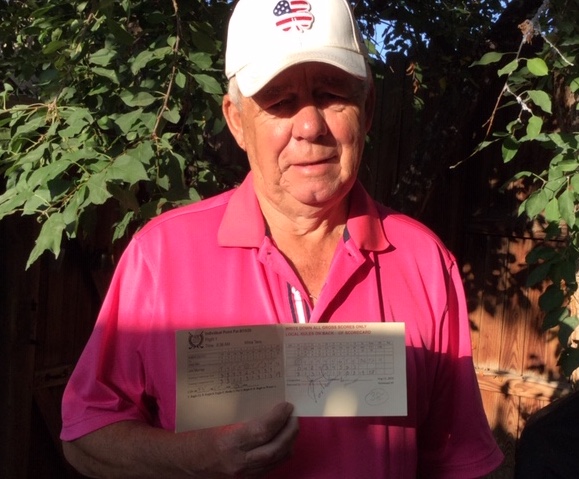 Jim Murray of Aurora displays the scorecard from the round in which he made an ace and shot under his age.

10 days after major heart surgery, Aurora resident Jim Murray makes hole-in-one and shoots under his age in the same round

It wasn’t long ago that Jim Murray was uneasy anticipating his upcoming heart surgery.

The Aurora resident, then age 73, had opted to undergo a TAVR — transcatheter aortic valve replacement — rather than open-heart surgery where his breastbone would have been split open and his heart stopped temporarily.

The option he had chosen was less invasive, to be sure, but it was still major surgery.

“It’s a complicated thing,” Murray said in a recent phone conversation. “I had pretty well convinced myself that my (golf) season was pretty much over with my impending heart surgery.”

But just a week after that operation on Aug. 5, he received the OK from his doctors to return to golf — and to his part-time job as a security guard at a gated community.

Murray was very happy with that outcome, but little did the former Adams State University golfer know what awaited in his first round of golf since going under the knife.

On Aug. 15, a mere 10 days after his surgery, Murray played in a men’s club tournament at Heather Ridge Golf Course, where he’s been a regular for years and won the men’s club’s match play championship last year.

Even though he felt only about 75 percent of normal, Murray did much more that day than just show up and go through the paces.

On the 10th hole, he made a hole-in-one, no less — the third of his life and both his longest and his first in a tournament. He used a 7-wood from 175 yards for the feat.

Murray would go on to post a 36 on the back nine at Heather Ridge, giving him a 2-over-par 72 total. Just a couple of weeks away from his 74th birthday (Aug. 31), Murray had shot under his age for the first time. A year ago, he had matched his age once (73 at the time), but this was an additional notch on his belt.

“That’s probably the best round I’ve ever had,” he said.

And when you consider what Murray had gone through just 10 days before with his heart surgery, it was downright amazing.

“I played like the golf gods were in my cart,” Murray said. “I don’t know what was going on. I tried to stay within myself. I was still kind of in a daze from that heart surgery. It went so well.

As is often the case, backing off a little proved very beneficial for Murray, given his recent surgery.

“I was focused on not overdoing it,” he said. “I was conscious how I was feeling. I was making sure I was taking a lot of liquids, and trying to move slow and don’t overdo anything. Just take it easy and enjoy the day.

“You’re kind of in a bubble. Take one swing at a time and play easy and enjoy being alive and being on a golf course. I think a lot of it was having all that (with the surgery) behind me and the relief in having it over with. Also, not having to go through with the other procedure, where they do the open heart surgery and crack open the chest. If you have that, you’re down for six months. … I just wanted to get back to my life.”

Of course, golf being golf, often what seems so easy one day doesn’t come nearly so easy the next.

“We had a club championship (late last month) and I was back to my 80s — back to normal,” Murray said. “Over-swinging and chunking.” But this month, Murray had another stellar score, a 75. He currently owns a 10.0 handicap index.

Through his work as a security guard, Murray in recent years has become friends with M.J. Mastalir, a former University of Colorado golfer who went on to compete in two U.S. Amateurs and later served on the powerful USGA Executive Committee and as the president of the CGA. Mastalir was inducted into the Colorado Golf Hall of Fame in 2017.

“He lives in the community where I work,” said Murray, a Colorado native who grew up in Delta, between Grand Junction and Montrose, then taught in eastern Colorado. “He meanders down and we talk golf all day long.”

No doubt what Murray accomplished last month has been good fodder for the conversations.