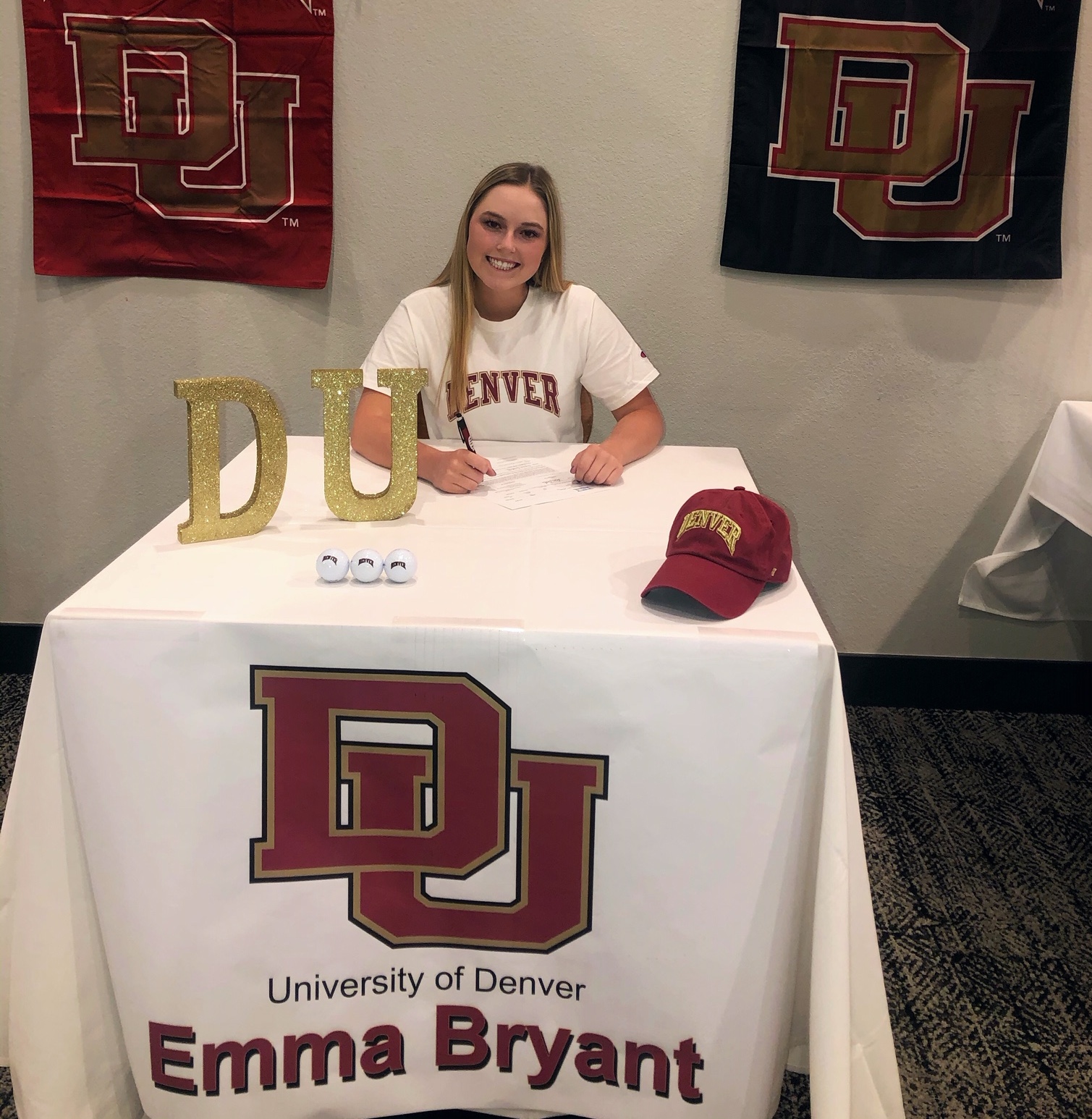 Emma Bryant of Aurora and Jordan Jennings of Montrose have been committed to their college golf destinations for more than a year.

But that was verbally. This week, the two Coloradans have had the opportunity to make it official that they’re remaining in the Centennial State to play at the next level.

The two state high school individual champions — Jennings won the 4A title as a Montrose senior last month and Bryant prevailed in 5A as an Eaglecrest freshman in 2018 — will be joining strong NCAA Division I programs beginning next fall. Jennings is headed for Colorado State University and Bryant for the University of Denver. Jennings will be a CSU teammate of Bryant’s older brother, Davis.

The CSU men had won three team titles when last season was cut short by Covid-19 safety concerns in mid-March and the Rams ended up ranked 16th to 19th in the national polls. The DU women finished 42nd to 44th in the national rankings.

And Bryant and Jennings aren’t the only Colorado junior golfers headed for NCAA Division I programs next fall. Joining them is Aubri Braecklein of Northglenn and Jefferson Academy, the Junior Golf Alliance of Colorado’s 2020 Girls Player of the Year, who is bound for Georgia State. And Sloane Post of Centennial and Arapahoe High School will play for Northern Colorado.

Bryant, who’s part of the Hale Irwin Player Program at CommonGround Golf Course, won a JGAC major title to cap her 2020 season, prevailing in the JGAC Tour Championship last month. It was her second JGAC victory of the year and her second ever in a major, to go along with the 2017 Colorado Junior Match Play. In other JGAC majors this year, Bryant placed third in the Colorado Junior PGA and fourth in the Colorado Junior Amateur. She also won the women’s division of the CGA Western Chapter Championship. Bryant represented Colorado in the 2018 Girls Junior Americas Cup competition.

“I’m really excited to have signed my (National Letter of Intent) to DU,” Bryant said in an email. “I’m thrilled for the opportunity that coach (Lindsay) Kuhle has given me and I’m looking forward to playing for my home state, Colorado, in crimson and gold. The program, facilities, and academics at the University of Denver are outstanding and I can’t wait to push myself and my future teammates to be the best. The DU women’s golf team is only improving and I’m so pumped to get onto campus and better my game.”

“I love the program at CSU with a great coaching staff and unbelievable facilities,” Jennings said in a Tweet released by the Rams’ golf program. “I am excited for CSU to be my home for the next four years.”

In Braecklein’s case, a big 2020 no doubt helped land her at a Division I program — just as a former Jefferson Academy golfer, current LPGA player Jennifer Kupcho, earned a spot at DI Wake Forest. Braecklein made some history in June by winning the CGA Women’s Stroke Play at age 17 as she became the youngest champion of that event in more than a dozen years, before which detailed records weren’t kept.

The National Letter of Intent signing period for golf began on Wednesday and runs through Aug. 1. This year’s recruiting process has been altered due to Covid-19, with the NCAA suspending in-person recruiting until at least Jan. 1 for Division I programs.

Below is a list of Coloradans and JGAC members who have signed NLIs or have committed to play college golf for specific programs. This list will be updated. (To let us know about additional commitments, email us at golfjournal@coloradogolf.org)

University of Colorado Men
Frederik Eisenbeis of Cologne, Germany, a member of the German national team who won the 2019 Berlin Open

Clara Gestsdottir of Iceland, a member of the Iceland national team