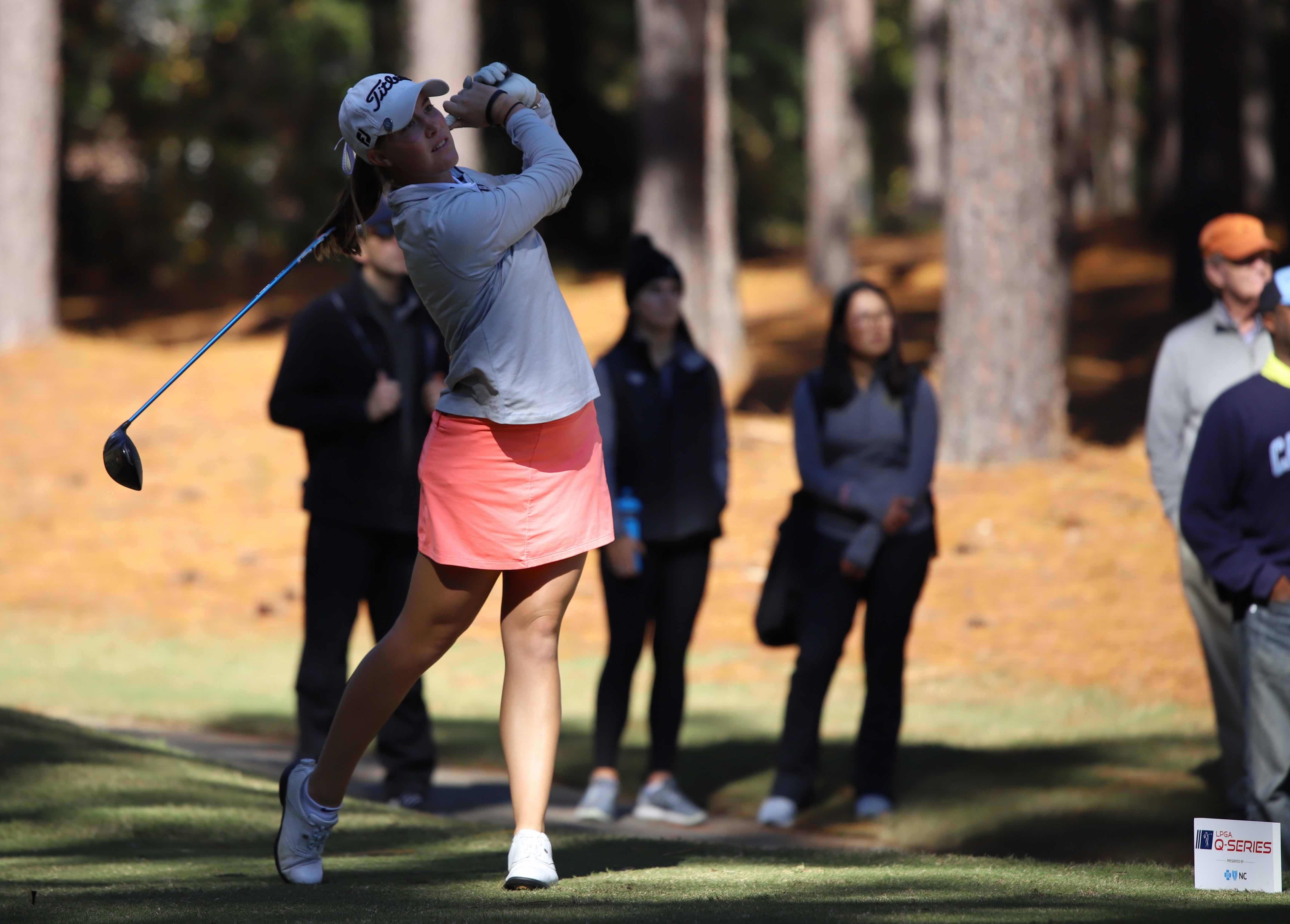 Coloradans Kupcho, Huffer earn LPGA Tour cards with plenty of room to spare; CU’s Choi birdies 2 of last 3 to advance on the number

It’s been a heady time for the best of the best in Colorado golf.

And on Saturday, two of their female counterparts — Colorado natives who grew up in the state — followed suit on the LPGA side.

Jennifer Kupcho of Westminster and Becca Huffer of Denver not only obtained LPGA Tour cards for 2019 through the inaugural Q-Series that concluded on Saturday in Pinehurst, N.C., they did it with plenty of room to spare.

With the top 45 finishers and ties in the eight-round Q-Series landing LPGA status, Kupcho, the NCAA individual champion from Wake Forest, finished second out of 102 players. She played her last eight holes at Pinehurst No. 7 in 4 under par en route to a 2-under 70 on Saturday. Her 17-under-par 559 total left her a stroke behind medalist Jeongeun Lee 6 of South Korea. (Kupcho is pictured above in an LPGA photo.)

“It’s amazing,” Kupcho said by phone on Saturday afternoon. “It was a marathon out there, and I was just kind of plugging along as each day went by. I’ve been shooting for this goal for so long that it’s awesome to just be able to go back to school knowing that I have what I’m going to do after college already in the bank.”

As for Huffer, the 2013 CoBank Colorado Women’s Open champion and Symetra Tour veteran also landed in the top 10, in 10th place. She closed with a 73 to post a 3-under-par 573 total.

“Going into this week I knew I could do it,” Huffer said, also by phone on Saturday. “I just played my game. I’m excited to get it all done.”

Also earning a card on Saturday was University of Colorado junior Robyn Choi, who’s qualified in Colorado for the last two U.S. Women’s Opens. Choi birdied two of her last three holes on Saturday to land an exemption on the number, tying for 45th place.

After also coming into the final day in 45th place, Choi played her first eight holes in 4 over par. But she went 2 under par the rest of the way to tie for the final qualifying spots. Choi closed with a 2-over-par 74 to finish at 10-over-par 586.

While Huffer (left in an LPGA photo) will start her rookie LPGA season early in 2019 given that’s she’s long been a pro, Kupcho confirmed on Saturday that she’ll defer becoming an LPGA member until after her final college season at Wake Forest wraps up in May. Kupcho, who will graduate in May with a degree in communications, has finished sixth, second and first individually in her first three NCAA championships.

“I was always going to go back (to school), no matter what,” she said. “I just want to get the degree and get out and have that as a backup.”

Choi (below in an LPGA photo) will have the same option as Kupcho. Amateurs were given the possibility of a deferment for the first time this fall.

By winning the 2018 McCormack Medal as the top women’s amateur in the world, Kupcho would have automatic spots in next year’s U.S. Women’s Open and Ricoh Women’s British Open — but only if she remained an amateur. But she said she plans to go pro before the 2019 U.S. Women’s Open (May 30-June 2), so she’ll need to qualify to get in the field. Kupcho has played in two U.S. Women’s Opens, finishing 21st in 2017.

In a year in which she won an NCAA individual title, has been the No. 1-ranked women’s golfer in the world, helped three U.S. national teams to titles in international competition and posted her first top-20 finish in an LPGA event, Kupcho achieved a bigger-picture goal on Saturday.

The 21-year-old Littleton native qualified for the LPGA Tour in her first try, and made it look relatively effortless. Kupcho’s only over-par score in the Q-Series came on opening day, when she carded a 1-over 73. She finished 27 strokes ahead of the final players who earned their LPGA cards. Her runner-up showing will give her priority getting into LPGA tournaments over players who finished below her in the Q-Series.

“When it started out (in the Q-Series), the courses seemed so hard,” Kupcho said. “The first week I was just shooting for par, and I took that mentality the rest of the way. I was able to get a couple of really low rounds that helped boost me and give me that cushion.”

Huffer, who like Kupcho won two state high school titles in Colorado, likewise met the standard with plenty to spare — 13 strokes in her case.

“This year I’ve played really well,” she said. “I was feeling really good about my game. The new format they had for Q-Series, I thought it really worked well for my game — consistency and stuff. I was excited to accomplish my goal.”

Indeed, it’s quite an accomplishment for two golfers who have both been CWGA Players of the Year over the last decade — Kupcho three times and Huffer once.

Huffer, a Denver native and current Monument resident, demonstrated she might be on the verge of a breakthrough with a strong season on the Symetra Tour. The 2012 U.S. Women’s Open qualifier finished 21st on the 2018 Symetra money list, with three top-10 finishes, including a runner-up and a third place. Huffer, a Littleton High School and Notre Dame graduate, is 28 years old. She won the CWGA Match Play title and Junior Stroke Play in 2005 as a 15-year-old. Huffer reportedly is the first Notre Dame alum to earn an LPGA Tour card.