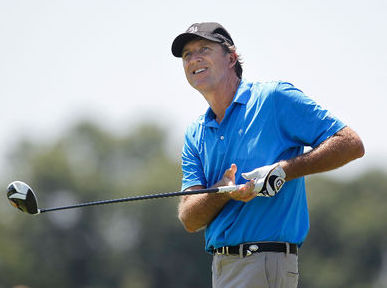 Former University of Colorado golfer Steve Jones is competing in his first U.S. Senior Open since 2015, and he’s trying to make the most of it.

The 60-year-old Colorado Sports Hall of Famer, who had to skip last year’s U.S. Senior Open in Colorado Springs following knee surgery, shot a 4-under-par 66 on Friday and shares 16th place at the halfway point of this week’s USSO in South Bend, Ind.

The 1996 U.S. Open champion (pictured) was 1 over par for the day through five holes on Friday, but then kicked it into high gear, playing his final 13 holes in 5 under. That leaves him at 3-under 137, 11 strokes behind leader Steve Stricker.

(Saturday update: Jones posted a 2-over-par 72 in the third round, and his 1-under 209 total leaves him in a share of 30th place going into Sunday.)

Jones had to go through qualifying to land a spot in this week’s field. He shot a 67 in the Phoenix qualifier to earn medalist honors at the site.

Jones, whose best finish ever in the U.S. Senior Open was a 16th in 2011, was the only player with strong Colorado ties to make the 36-hole cut on Friday.

Colorado Golf Hall of Famer Brandt Jobe missed a cut for the first time ever on PGA Tour Champions, where few events aside from major championships have cuts. In his previous two U.S. Senior Opens, Jobe had finished third in 2017 and fifth last year at The Broadmoor.

Here are the scores for players with significant Colorado connections: