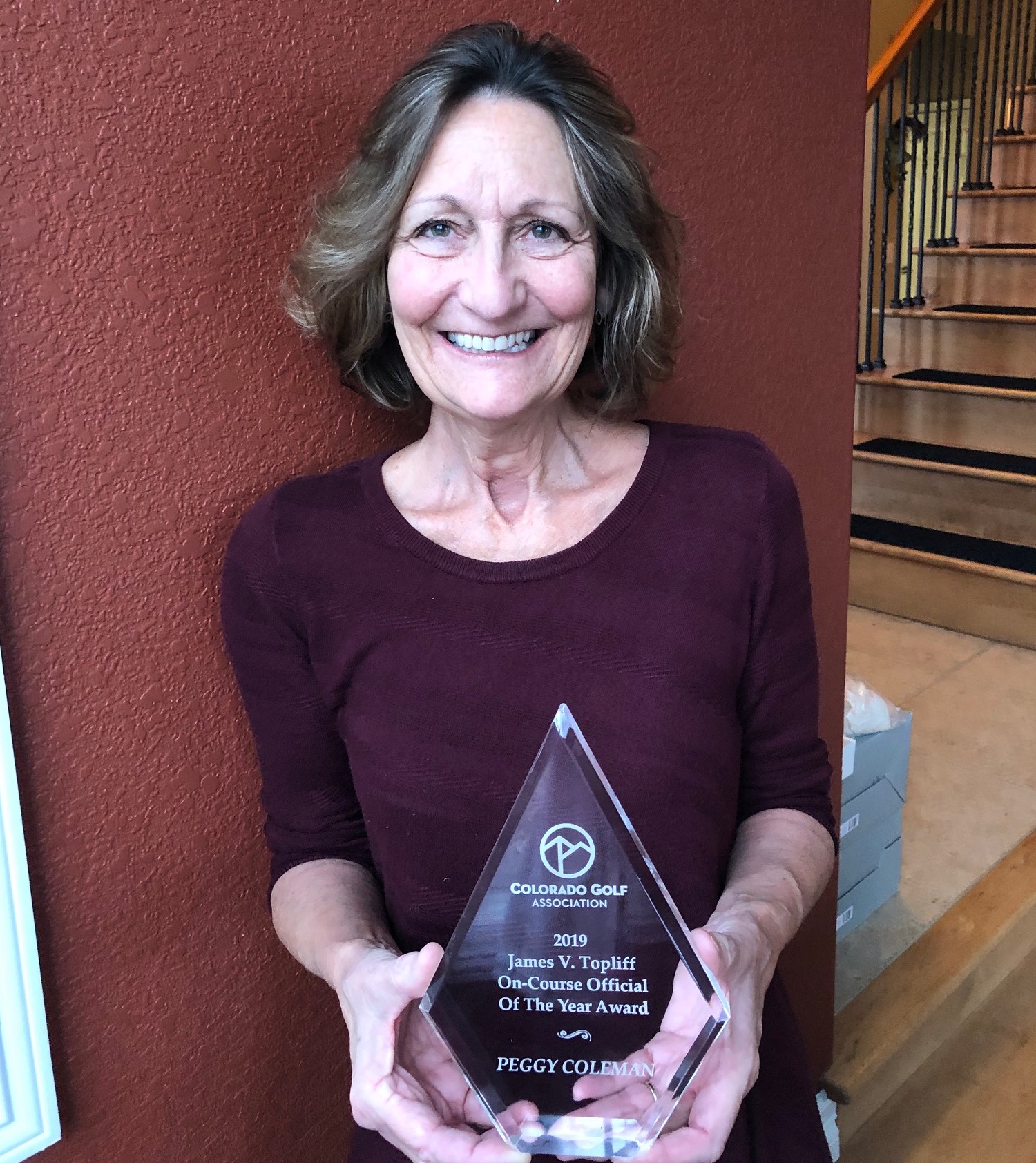 It’s often a pleasant surprise when someone calls to inform you that you’ve earned an award or honor.

But sometimes it takes a while for the news to sink in.

Such was the case recently for Peggy Coleman, who was informed that she would receive the CGA’s Jim Topliff On-Course Rules Official of the Year Award.

When longtime CGA/CWGA board member Sandy Schnitzer informed Coleman by phone, there was a little confusion in passing along the message.

“When I called her, I said you’re going to be awarded the Topliff Award for outstanding rules officiating,” Schnitzer noted. “And she said, ‘the Topless Award? How did I win that?’ It just cracked me up.”

Recalled Coleman of the conversation: “I’m going, ‘What?’ I think there was silence on my part for quite a while, then I said, ‘Can you repeat that?’”

Amusing misunderstanding aside, Coleman made some history by winning the award. The honor — named for Jim Topliff, a longtime tournament director for the CGA who passed away in 2007 — has been given out annually since 1995 to a volunteer rules official who typically works quite a few days and makes an impression while conducting his or her duties.

But this year marks the first time the Topliff honor has gone to a woman — at least strictly to a woman. In 2014 the Topliff Award was presented to a couple, Cope and Judy Bradford, marking the only time the honor has been given out to more than one person in a given year.

“I’m really honored,” Coleman said in a phone interview last week. “It was a complete surprise, for sure. I really feel honored the group would consider me and choose me.”

As for being the first solo female winner of the Topliff Award, Coleman added, “My focus — not always, but generally speaking — is I work with the women golfers as a rules official. I just have a passion to head that direction with my officiating, etc. I’m actually a (retired) mechanical engineer. I guess the rules officiating kind of works with that. Having the analytical brain processing is beneficial for sure. Maybe being a woman in a man’s environment — we had a consulting firm in the construction industry — you just learn to get along with a lot of people and figure out how to handle situations. It was a lot of problem-solving, obviously. That’s kind of what rules officials do.

“But being a woman where there’s a lot of men all the time, it is pleasing to me that they considered a woman for the (award).”

Coleman, a resident of Morrison and a member at Red Rocks Country Club, has been a volunteer rules official for about 11 years — having worked CWGA events for much of that time before transitioning to CGA tournaments and activites when the CGA and CWGA integrated into one organization at the beginning of 2018.

While Coleman worked some events as a rules official in 2019, she significantly curtailed that volunteerism this year because she’s caring for her husband, Doug Marion, as he’s been battling brain cancer. But going back to 2018, Coleman worked approximately 10 tournaments as a rules official. And her work is highly respected, as indicated by the fact that she’s been a rules captain at some events starting last year.

“She has an outstanding knowledge of the rules,” said Schnitzer, an accomplished rules official in her own right, and one who nominated Coleman for the Topliff Award. “It kind of goes without saying being a rules official. But she is above average — way above average.

“Her demeanor on the course is, I think, incomparable. I have seen her do a really complicated ruling in an incredibly professional, straightforward, easy-to-understand way that did not upset the golfer. Peggy was just so calm and caring without it being an ‘oh sorry’ kind of thing. She’s the consummate official on the course. She not only knows the rules, but she applies them in a really humane and understanding way that makes sense to the golfer, which is really important.”

Coleman is a middling golfer by USGA handicap index standards, owning a 24.6 USGA handicap index. But her knowledge of the rules — and how to implement them — falls into the exceptional category. That education began when she had had her fill of hearing people spout off about the rules who didn’t seem to have a clue if they were correct or not.

“I actually got involved in rules officiating because I was (relatively) new to golf and there were a lot of people saying a lot of things that you kind of scratch your head and go, ‘Really?’,” Coleman said. “Then I learned the rules so that I could come back at them and go, ‘No, not so fast.’”

“My friend Wendy (Walberg, an attorney) got me involved about a year after she got involved. We golfed together and both had the issue with people saying things that didn’t seem quite right. She did bring me along and we’ve been off and running ever since.

“I’m not a stellar golfer by any stretch. But knowing the rules when you’re out on the course, it’s definitely beneficial to your game because you cannot get flustered when something comes up.”

Nowadays, beyond officiating at CGA women’s tournaments, junior events and occasional collegiate tourneys, Coleman conducts some rules seminars at various clubs and has helped oversee the rules portions at what are now known as CGA Women’s Clinics once or twice a year. CGA Women’s Clinics, previously known as CWGA Experience events, are socially-oriented half days of high-quality group golf instruction for women.

“Even if she’s not signed up to work that tournament, if you call and say, ‘We’re really stuck and we need somebody’ or ‘the team captain, she’s out sick’, she always steps up,” Schnitzer said of Coleman. “There’s no ‘maybe I can.’ She right there. She’s always stepping up when you need some extra help, which I think is an amazing characteristic — and it’s saved us on several occasions.”

So what about working as a rules official appeals to Coleman?

“Just helping the golfers out there,” said Coleman, a Coloradan since 1962. “(For) the experienced golfers, just kind of being a reminder about the rules if we show our face on the course or whatnot. But a lot of it is bringing along new golfers and telling them the rules and why they’re important and how they can work for them.”

Beyond that, Coleman thoroughly enjoys the folks she works with as a rules official.

“It’s such a good group of people,” she said. “They take care of golfers of every ability. It’s just really fun.”