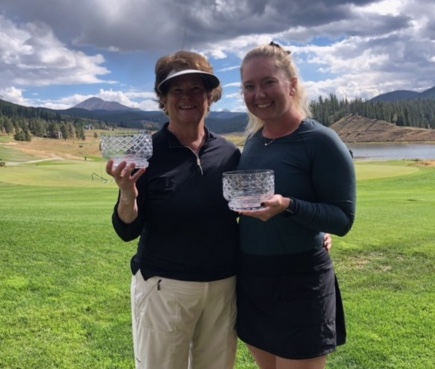 Sandra Young has taken quite a shine to the CGA Women’s Dunham Championship — and for good reason.

The player from Eisenhower Golf Club won the tournament for the third time in four years on Sunday, becoming just the fourth player to have that amount of success in the two-person team event.

After capturing the championship in 2018 and ’19 with Louise Lyle, Young teamed up this year to earn the trophy with Sophie Kelner of Cherokee Ridge Golf Course as Lyle was competing in the U.S. Senior Women’s Amateur in Alabama on Friday and Saturday.

Young and Kelner rallied from two behind going into Sunday at Keystone Ranch Golf Course to capture the championship by seven strokes. Young thus joins Stacey Arnold and D’Ann Kimbrel (2008, ’09 and ’10) and Colorado Golf Hall of Famer Christie Austin (2013, ’15 and ’20) as three-time winners of the Dunham Chapman.

“That was really fun,” Young said. “I like having a really good partner. Sophie Kelner played super great today — actually both days. She hits a very long ball and the short game is my area. (The team) was a really nice combination.

“But I’m very much surprised (at the run of success in this event). I really never thought I’d win a state championship. It’s very hard to digest. I didn’t start golf until I was 40. Just playing in a state championship, let alone winning it (is a big deal). It’s super nice to win. I never would have expected to.”

Young and Lyle never had the opportunity to try for a “three-peat” in the Dunham Chapman last year as Lyle hurt her hand at the tournament site just before the first round and they had to withdraw. But with Lyle earning a berth in this year’s U.S. Senior Women’s Am, Young had a contingency plan worked out with Kelner — a 25-year-old former college golfer at Cleveland State  — to team up at Keystone Ranch. The two met at a tournament at Colorado Springs Country Club earlier this summer.

And the rest is history as the two partnered to shoot a 2-over-par 74 on Sunday and they overtook first-round leaders — and fellow Colorado Springs-area residents — Ron Irons of Eisenhower and Denise Cohen of Kissing Camels to claim the title. Young and Kelner finished the 36-hole event with a 7-over-par 151 total.

“It’s amazing to come out with a victory,” said Kelner, who moved to Colorado 2 1/2 years ago. “We knew if we were within a few shots going into the second day that this golf course is challenging enough that we’re going to have opportunities to make some shots back. Two strokes felt like nothing going into our round today. We just played our game, played within ourselves and took the right advantage at the right time.”

The Dunham Chapman features a format in which each golfer hits a tee shot, then plays her partner’s ball for the second shot. After that, a scoring ball is chosen, and that ball is played alternately into the hole.

Irons and Cohen finished tied for second on Sunday at 158, marking their fifth second- or third-place showing in this event since 2013. They struggled a bit in round 2, shooting an 83 after opening with a 75.

Also sharing second place was yet another Colorado Springs-area pairing — Betty Bullington of Eisenhower and Betsy White of Kissing Camels — who carded a second-round 77.

As for the champions, they kept things together with a hard-fought bogey on No. 3 and a nifty par save on No. 8, then shot 1 under par for their final nine holes. The highlight was making three consecutive birdies starting at No. 12, the first two from short range, then Young draining a 25 footer on No. 14.

For the day, Young and Kelner finished with three birdies and five bogeys.

“With the three straight birdies, we felt the momentum going our way at that point and didn’t look back,” Kelner said.

Though Young hadn’t won a state title until 2018, she captured the championship in a worldwide tournament for military spouses and dependents in 2010, and she’s qualified for four national USGA championships — a Women’s Publinks, Mid-Am and a couple of Senior Ams. The Monument resident is now 61 years old.

Meanwhile, her much younger partner was competing in her first CGA championship, which makes her winning percentage pretty darn good at this point.

“I’ve got to stop while I’m ahead, right?” Kelner said with a laugh.

Here are the low-gross and low-net winners in all of the flights at Keystone Ranch GC:

For all the scores scores from the Dunham Chapman, CLICK HERE.