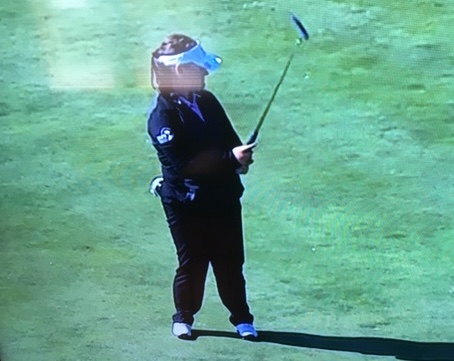 It was already a big weekend for Aubri Braecklein of Northglenn, who was one of two members of The First Tee of Denver competing at Pebble Beach in the nationally-televised PGA Tour Champions event known as the PURE Insurance Championship.

But Braecklein compounded her excellent adventure by contending for the title in the girls division of the pro-junior portion of the event.

Braecklein (pictured on Sunday), who made a hole-in-one while representing Colorado this year at the Girls Junior Americas Cup, had the lead outright among the girls going into her final hole on Sunday, No. 9 at Pebble Beach Golf Links. But a bogey there dropped her into a tie for the top spot with the already-finished Ashley Menne of The First Tee of Phoenix, and Menne won a scorecard playoff after a final-round 65, according to the Golf Channel.

Bracklein, a Jefferson Academy student who tied for second in the girls 3A state high school tournament in May, went 62-67-68 for an 18-under-par net total of 197. In the overall junior competition, regardless of gender, Braecklein tied for fifth place, five strokes behind boys junior champ Sam Sommerhauser of The First Tee of Greater Sacramento.

In all, 78 First Tee members from around the country participated in the PURE Championship, with those 78 selected “based on their understanding and application of the values and life skills learned through First Tee’s programs, as well as their playing ability.”

The other First Tee of Denver member who competed was William Perez (71-69), who wasn’t among the top 23 juniors who advanced to Sunday’s action at the PURE Championship. Braecklein’s pro during the first two rounds of the event was fellow Coloradan Gary Hallberg, while Perez teamed with Joe Durant.

The First Tee is a youth development organization dedicated to helping young people build character through the game of golf.

Elsewhere for local players competing this week at significant national or international competitions:

— Former University of Colorado golfer Sebastian Heisele continued his strong play in September on the European Challenge Tour by placing second in the Hopps Open de Provence in France.

In France on Sunday, Heisele posted a bogey-free 7-under-par 65, giving him a 15-under 273 total and leaving him one stroke behind champion Lars Van Meijel.

The showing was worth 22,000 euros for Heisele. He moved up to 15th in the season-long Challenge Tour standings.

— Marty Jertson, the former Colorado School of Mines golfer who claimed the title at the 2001 CGA Amateur, won his singles match on Sunday and helped the U.S. rally to victory in the PGA Cup matches against Great Britain & Ireland.

The PGA Cup is a Ryder Cup-like competition between the top PGA of America club professionals from the U.S. and GB&I.

Jertson had an 0-3 individual record in four-ball and foursomes with partner Danny Balin on Friday and Saturday, but he recorded a 4 and 2 victory over GB&I’s Craig Lee on Sunday in singles. Jertson made five birdies in the 16 holes of the match.

Here are Jertson’s individual results at the PGA Cup:

— Former University of Colorado golfers Jenny Coleman and Esther Lee will go into the final week of the Symetra Tour season in eighth and ninth place, respectively, on the season-long money list. If they finish in the top 10 on that list at the end of this coming week’s Symetra Tour Championship, they’ll earn LPGA Tour cards for 2020.

With an 18th-place showing Sunday in the IOA Golf Classic in Longwood, Fla., Coleman swapped places with Lee in the money standings, with Coleman at $83,801 and Lee at $81,865. That puts them in a strong position to finish in the top 10 as the 11th-place player in the standings has $70,870.