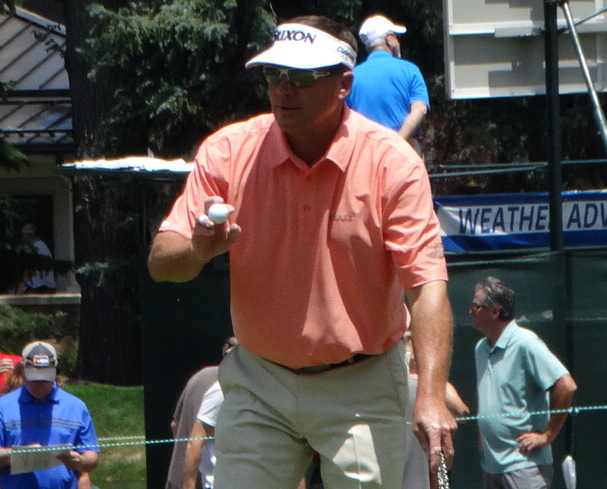 The Colorado Golf Hall of Famer, who grew up in the Centennial State, started off Sunday’s final round of the Boeing Classic in Snoqualmie, Wash., seven strokes behind the leader, World Golf Hall of Famer Fred Couples. He seemed in line for a very good finish, but not a victory.

Yet not only did Jobe win on Sunday, but he prevailed by a seemingly comfortable margin of three strokes.

That’s what a 9-under-par 63 in the final round will do for you, especially when combined with the leader, Couples, shooting 76.

“I kind of thought we were going to be playing for second,” said Jobe (pictured). “If Freddy goes out and shoots 3, 4, 5 under like he had done the first two days that’s really what we were doing. I birdied the first five holes and thought, ‘Well, at least that’s making a little noise.'”

Indeed, Jobe birdied the first five holes of the final round and the last two. For the day, he carded 10 birdies and one bogey to give himself an 18-under-par 198 total for the week.

Tom Pernice Jr., placed second at 201, while Couples tied for third at 204 after posting a final-round score 13 strokes higher than his second-round total.

It was the 54-year-old Jobe’s first Champions victory since the Principal Charity Classic in June 2017.

‘It’s just a fun day when you can go out there and do what you’re trying to do. When it happens, it’s really gratifying,” Jobe said.

Elsewhere in tour-related action for golfers for strong Colorado connections:

— Denver native Mark Hubbard already has his PGA Tour card locked up by virtue of finishing ninth on the 2019 regular-season point standings for the Korn Ferry Tour. But now he’s playing to improve his status going into the 2019-20 PGA Tour season.

And on Sunday, he definitely helped his cause.

Hubbard went 67-69-65-66 in Idaho to post a 17-under-par 267 total, which left him two strokes behind champion Matthew NeSmith, who closed with a 64. Hubbard made seven birdies and two bogeys on Sunday.

It was the former Coloradan’s fourth top-six finish on the KF Tour in 2019.

Hubbard, who spent three years on the PGA Tour from 2014-17, will return to that circuit next month after competing in next week’s Korn Ferry Tour Finals.

— At least three players with strong Colorado connections earned spots into stage II of LPGA Tour qualifying on Sunday with their performances in stage I in Rancho Mirage, Calif.

Fan finished 15th out of an original field of 359, while Gilbreth and Bruun tied for 57th. At least the top 95 finishers and ties advance to stage II of Q-school, set for Oct. 14-17 in Venice, Fla. The top performers in Florida will earn berths into the eight-round LPGA Q-Series Oct. 23-Nov. 2 in Pinehurst, N.C., where 2020 LPGA Tour cards will be on the line.

Here are the scores of the players with strong Colorado connections from the first stage of LPGA Q-school: