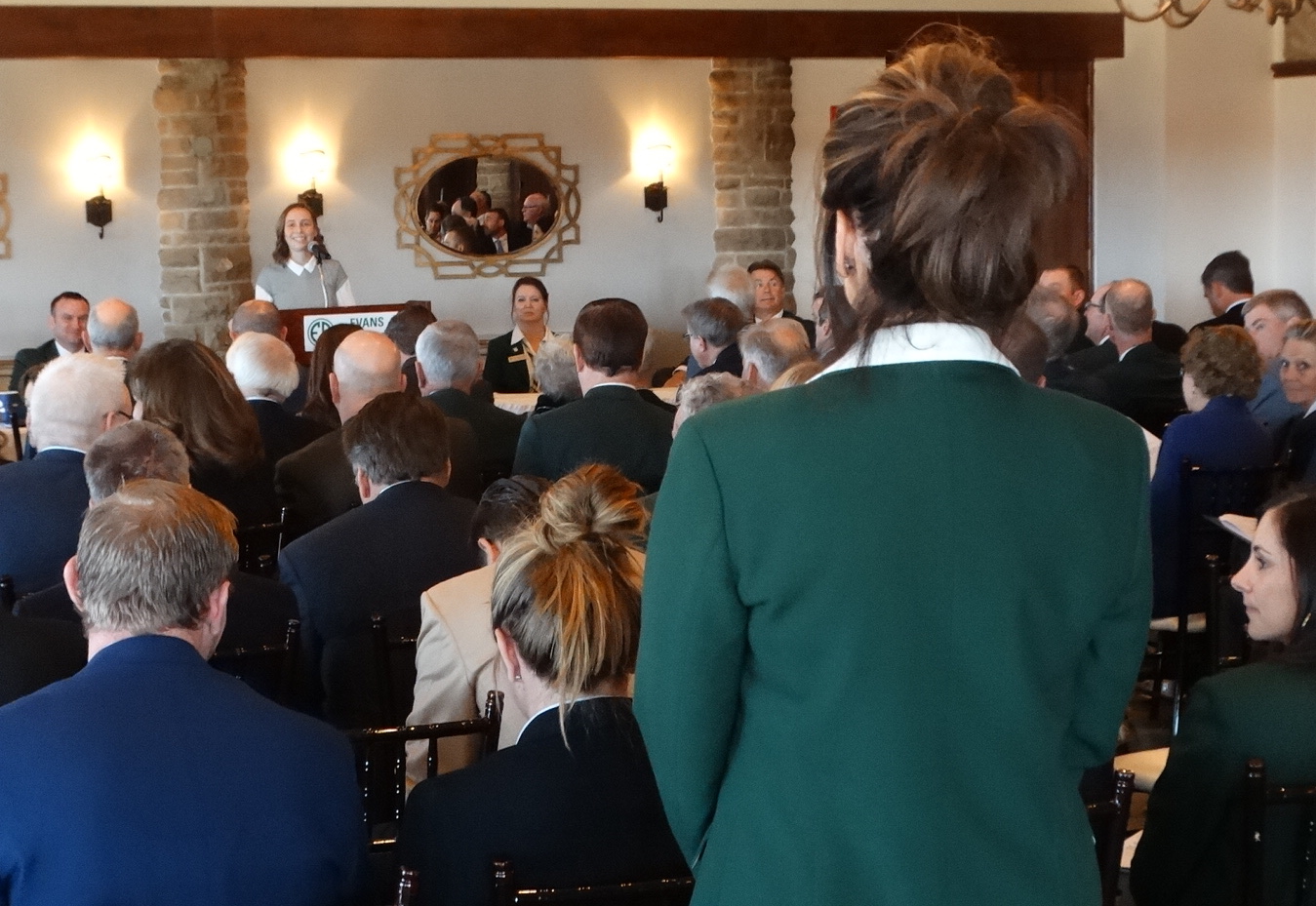 About 150 people at a selection meeting last month at Cherry Hills Country Club interviewed finalists for the Evans Scholarship.

Three Solich Caddie & Leadership Academy graduates from the Meridian Chapter are among 13 caddies to receive the Evans Scholarship. Logan Byler of Parker completed his four years of caddying at Castle Pines Golf Club. Giovanny Gordillo of Denver finished his four years of caddying at Cherry Hills Country Club and Fenton Dowling finished at Meridian Golf Club. All three will receive full tuition and housing to the University of Colorado at Boulder. Since the inception of the Solich Caddie & Leadership Academy 22 graduates of the program have received the Evans Scholarship. To learn more about the Academy and how your membership helps support it and other CGA programs, CLICK HERE.

The impressive numbers keep increasing, there are significant  milestones reached, and the compelling storylines never seem to stop when it comes to the Evans Scholarship for caddies.

That’s true regarding the scholarship in general, and in Colorado per se.

On Wednesday, the Illinois-based Western Golf Association, which administers the scholarship nationwide, announced that 13 caddies from the Centennial State recently received some once-in-a-lifetime news as they learned that they’ve earned full-tuition and housing Evans Scholarships at the University of Colorado for terms  beginning in the fall.

An Evans Scholarship is estimated to be worth $120,000 if renewed for four years — though the amount can vary significantly depending on the individual case.

A selection committee numbering about 150 — a near-record total for Colorado — interviewed the finalists on Jan. 28 at Cherry Hills Country Club, one of the biggest supporters of the Evans Scholarship in Colorado. Cherry Hills has produced more than 40 E.S. alums over the last 53 years.

The incoming class will feature nine young men and four young women. Women have been Evans Scholars at CU on and off since the early 1970s. Currently, one-third of the 60 CU Evans Scholars are women.

“Each of these deserving Evans Scholars epitomizes what our program has been about since its creation in 1930,” WGA chairman Kevin Buggy said. “Their dedication, hard work and sacrifice is humbling, and we are honored to be able to help them pursue their dreams.”

At the beginning of this school year, the scholarship reached a long-stated goal of having more than 1,000 Evans Scholars currently in school as 1,010 started this fall, including 60 at the scholarship house at CU in Boulder.

The 13 Colorado caddies who just received the scholarship — out of 36 applicants — are a diverse group. Two are first-generation Americans within their family. One is a cancer survivor. One is one of 10 siblings in his family. Two will earn three-year scholarships as they’re already in the midst of their freshman year at CU.

But they’re all accomplished scholars and caddies. As a group, they average a 3.73 high school grade-point average on a 4.0 scale and 112 caddie loops on the course. Dakota Makinen of Aurora, who knew almost nothing about caddying and golf before starting at Denver Country Club, racked up 150 caddie loops in just two years there. Fenton Dowling of Littleton matched that total in four years at Meridian Golf Club.

Seven scholarship winners have been members of the National Honor Society at their high school.

Three new Scholars started their caddie careers at the Solich Caddie & Leadership Academy at Meridian Golf Club, which is one of three chapters for that program in Colorado, the others being at CommonGround Golf Course in Aurora and in Grand Junction. Since the Solich Academy was founded in 2012, 22 of its caddies have earned Evans Scholarships.

Here are the 13 new Evans Scholars from Colorado:

Many of the recipients have overcome significant obstacles to earn the Evans Scholarship. Srsen certainly falls into that category, having been diagnosed with cancer at age 13, but being declared cancer-free in 2015 after 42 weeks of treatment.

Srsen, who missed his normal seventh-grade school year and lost about 25 pounds during his treatment, said at one point he was so depleted that he fell three times while running during a sports tryout and had to be carried off. “To go from there — where I couldn’t run 10 feet — to where I am now is really amazing.”

Such is one of the many inspiring stories of Evans Scholar recipients.

The Evans Scholarship was established in 1930 by Charles “Chick” Evans, winner of a U.S. Open and two U.S. Amateurs.

Nationwide, there are Evans Scholars at 18 universities, 17 of which have occupied E.S. houses, spanning from Washington to Penn State. The scholarship has produced more than 11,050 graduates, including 491 from CU since the 1960s. Approximately 1,010 Evans Scholars are currently enrolled across the country, and about 285 scholarships are expected to be awarded for the incoming class of 2020–21.

Over the last 90 years, the Evans Scholarship has provided more than $410 million worth of tuition and housing to caddies. The annual scholarship costs for the program run about $25 million.

Evans Scholars typically excel academically, with a cumulative college GPA of 3.3, and a 95 percent graduation rate.

Notable: As noted above, about 150 people showed up to serve on the selection committee and interview the Evans Scholars finalists on Jan. 28 at Cherry Hills Country Club, the site of one of more than 20 E.S. selection meetings nationwide. Among those on hand was WGA director and state chairman Geoff “Duffy” Solich, a former Evans Scholar at CU. “This is one of my best days of the year,” Solich said. “It’s an eye-opener the effect this has on our candidates.” The Solich Caddie & Leadership Academy at CommonGround Golf Course, Meridian Golf Club and Grand Junction is named for Duffy and his brother George, who is also a CU Evans Scholar alum and who was also in attendance at Cherry Hills. … Likewise among those on hand were WGA president and CEO John Kaczkowski and CGA president Janene Guzowski, along with numerous fellow WGA directors, staff and supporters; Evans Scholar alums; numerous staffers and volunteer leaders from the CGA; and some PGA head golf professionals and others from the Colorado golf industry.