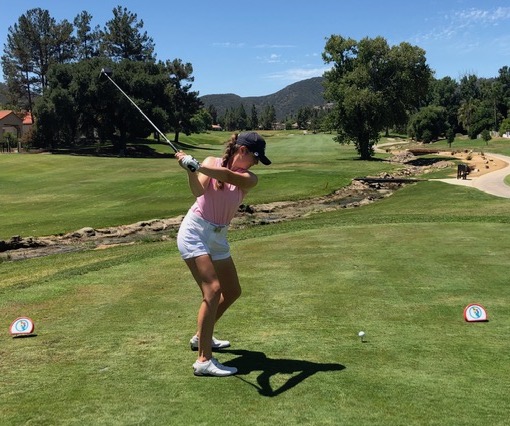 The last time Charlotte Hillary represented the Junior Golf Alliance of Colorado in the Girls Junior Americas Cup, she finished in 30th place individually in 2017.

So far this year, the golfer from Cherry Hills Village is stepping it up big-time.

Through Wednesday’s second round in Murrieta, Calif., Hillary remains tied for second place individually out of the 72-player field. That’s no small feat since just one Coloradan in the history of the Girls Junior Americas Cup has claimed the individual title — Jennifer Kern in 1993.

With Hillary (pictured) leading the way, Colorado remains in ninth place out of the 18 teams from the western U.S., Canada and Mexico.

Hillary, twice a winner of the JGAC Tour Championship, shot a 2-under-par 70 on Wednesday and checked in overall at 5-under 139. The only player ahead of her in the individual standings is Cassie Kim of Washington, who carded a bogey-free 66 in round 2 for a 136 total.

Hillary, who will begin her Northwestern University college golf career in the fall of 2020, and first-round leader Lana Calibuso-Kwee of Hawaii are tied for second, three back of Kim. Hillary made five birdies and three bogeys on Wednesday.

In the team standings, Colorado improved by two strokes over day 1 in posting a 10-over-par 226 total on Wednesday. At 454 overall, the Coloradans trail leader Washington by 26 shots, but they’re just seven strokes out of the top five.

As for the other Colorado individuals, Lauren Lehigh of Loveland holds 40th place at 157, Hailey Schalk of Erie is 46th at 159, and Aubri Braecklein is 50th at 161.

The third and final round will be held on Thursday.