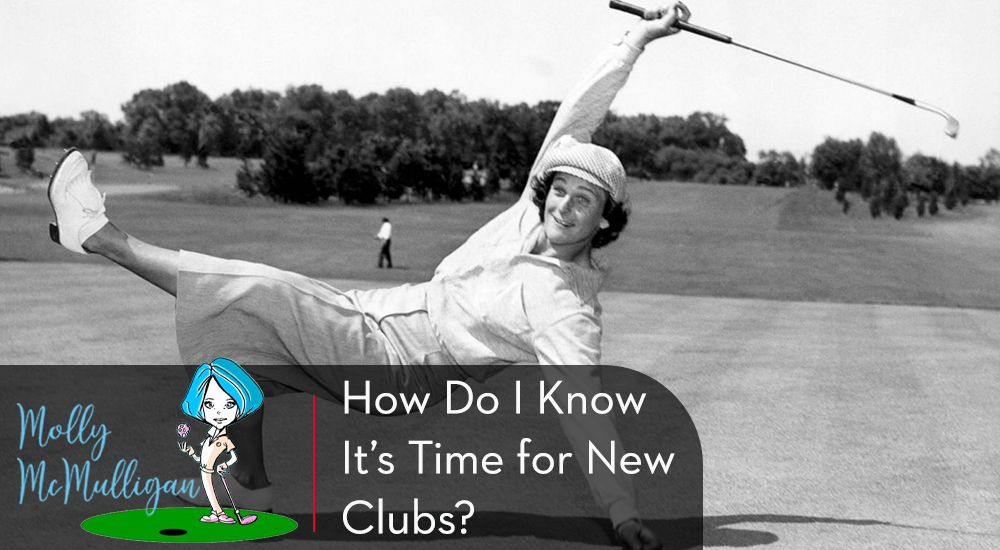 Dear Molly: I play golf for fun and use clubs that belonged to my dad. My pals keep telling me to get new ones. Is there really that much difference between 20-year-old clubs and the pricey new stuff? And what’s the best way to shop? The online marketing jargon is all a bit overwhelming, when all I really want are clubs that look sharp and make birdies.

The other day, a press release arrived from that golf club manufacturer with the BOOMING LOUD commercials. I tried to give it a read, but got lost in technical mumbo jumbo about not only loft, lie and flex, but face loading, moment of inertia, dispersion and, seriously, coefficient of restitution. When I told Mr. McMulligan about it, he took that as an invitation to preach about ‘puring’ and how important it is for golf clubs. Fortunately, he saw my eyes glaze over and changed the subject to what bottle of wine we should open that evening. Bingo!

Look, when we shop for golf shoes, we don’t want to hear about how much the cow weighed, what it ate, how the hide was tanned, what part of the skin was used. We just want to know they’re comfortable and supportive. OK, some of us might add, also cute. SO WE TRY THEM ON!

It is time for you to try on some new clubs. When I asked CommonGround Golf Course Director of Instruction Elena King if there’s a huge difference between 20-year-old clubs and today’s technology, she answered, “That’s a hard yes.” Nothing wishy washy about it. “Technology has come a LONG way,” says Elena. “The club should be a fit for your height. But the shaft flex and weight are very important and directly related to club speed, strength, power. That is not related to whether I’m a man or a woman, or my age, because plenty of senior women can swing it faster than some men. So I no longer classify clubs as men’s or women’s. We want the club to be neutral for us. We don’t want to ever feel like we have to make adjustments for the club in our hand. For example, if I gave someone a tennis racket that was too heavy, they’re going to adjust their serve motion. … So many people would say, let’s cut down dad’s old club and give it to the junior, or here’s my husband’s old club and give it to the spouse. And these clubs are too long, too heavy, too stiff.”

Nick Nosewicz, a scratch golfer who is also the resident club guru at his dad’s Supreme Ski and Lenny’s Golf and recent winner of the 2022 CGA Four-Ball Championship, has this analysis of 20-year-old clubs vs. new ones: “It’s like using the internet vs. looking something up in an encyclopedia. Technology has made everything better.”

And when it comes to drivers, Nick’s recently became convinced that this year’s models are genuinely better, not only better than 20-year-old drivers, but better even than last year’s hot buy! He visited Callaway’s research and development headquarters to ask the question his customers kept bringing him: “I just spent $500 on a new driver and a year later it’s obsolete because there’s a new one. It’s like I dropped $1,000 on an iPhone and they didn’t tell me they had a new model coming out in a few months and I should wait.” Callaway’s designers told him a process that used to take a year or two now takes mere months because of the advent of 3D printing. They’re able to streamline production so that golf club technology is improving year-round. So, yes, a new and better driver is always in the hopper.

And, says Nick, drivers wear out faster than irons. “They’ve got that really thin face, whether it’s titanium or the new carbon face TaylorMade has put out. And those fatigue over time. The same driver I kicked butt with in college is not going to go anywhere compared to what I play now. I would say for the average player, the driver lifespan is three to five years.”

You can get fitted for new clubs just about anyplace you can buy them, other than online. Most golf courses have someone who can do a basic fitting that’s often complimentary if you buy your clubs there. You can pay for a high-tech fitting and have clubs built for you there or walk out with a prescription for shopping. Or you can pick out the clubs you want at a golf specialty store and have them tailored to fit you. Lenny’s doesn’t charge for fittings, even for newbies buying their first clubs as a complete set – an idea that is not frowned on by the experts.

“I tell new golfers all the time, let’s start with something basic, maybe not even a full set,” says Elena. “Let’s make sure you love the game and are going to spend a lot of time doing it. Three years later, you’re really dedicated to golf and it’s time for custom fit clubs. For new golfers, not necessary at all.”

So count up your coins and get current with your clubs. If they’re 20 years old, it’s time.