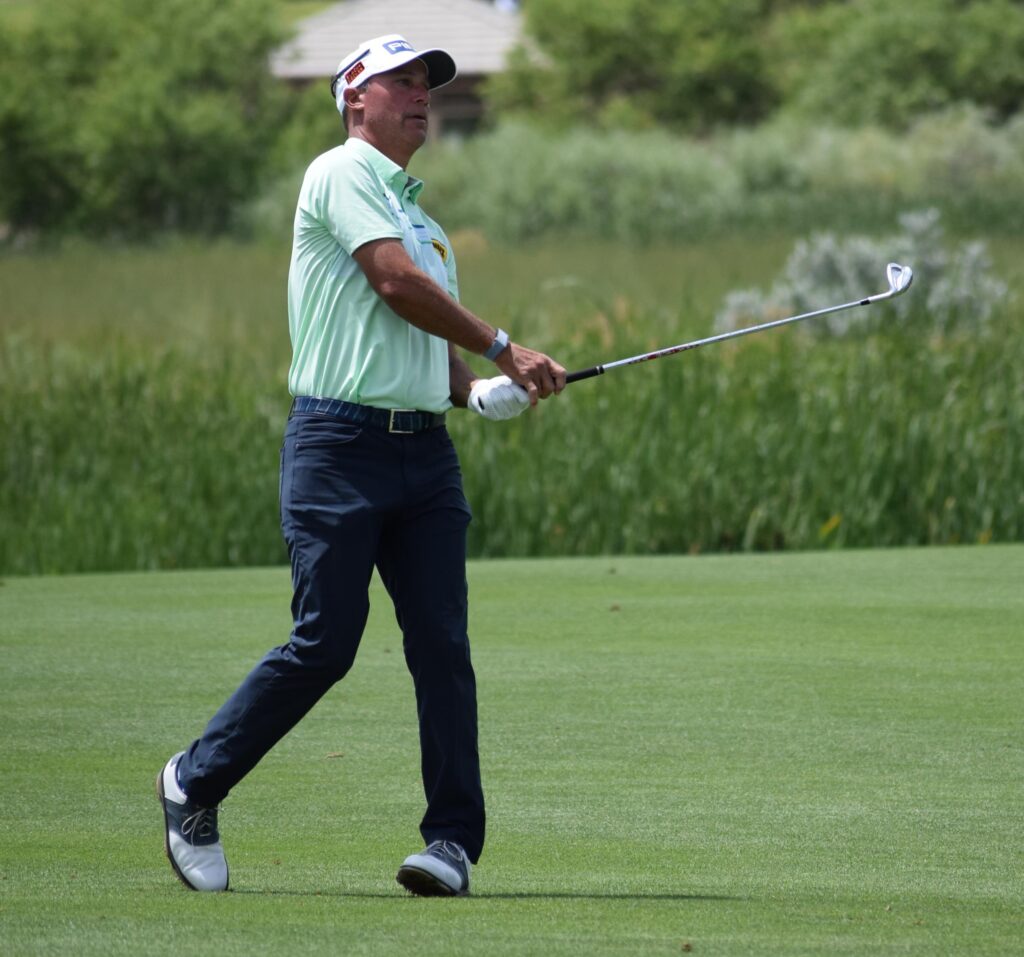 To the best of his recollection, Chris DiMarco last played a tournament round in Colorado at the 2006 International at Castle Pines Golf Club.

Nowadays, for the last two years, DiMarco has lived in Denver, so it seems only fitting that he should tee it up “for real” in the Centennial State again.

On Thursday, the three-time PGA Tour winner did just that, and the results weren’t bad at all, especially given that, at age 51, he’s competing against many players half his age.

“I played really good,” said DiMarco, who hadn’t ever teed it up at Green Valley Ranch until Wednesday. “I just didn’t make any putts. I probably had six or seven putts inside of 10 feet that I didn’t make. I’ve been playing a lot at Cherry Hills, where we’re members, and the greens are probably a couple of feet faster so my speed was a little bit off today.”

DiMarco moved to Colorado in July 2018 as his daughter, Amanda, was attending the University of Colorado in Boulder.

“We were driving home (and said), ‘Why are we not living out here?,’” DiMarco recalls. “It was perfect timing. We had one starting high school (Abigale), so she goes to (Denver) East. She’ll be a junior next year. And I was turning 50, so the timing was perfect.”

Nowadays,  Chris DiMarco lives about a quarter-mile from Denver Country Club and has been playing quite a bit of golf at Cherry Hills, especially since the PGA Tour Champions hasn’t held a tournament since March due to Covid-19-related safety concerns. The senior circuit will resume action next week.

“But literally I’ve probably played 65 rounds in the last three months,” said DiMarco, whose playing companions at Cherry Hills have included John Elway and Peyton Manning. “It really hasn’t been casual rounds. There’s been a lot of gambling, which is good for me because it kind of simulates at least some pressure and things that I need to do (as a tour player).”

It had been so long since DiMarco last played a tournament round that some of the rituals that go with being a tour player caught him a little off guard on Thursday.

“I was a little nervous,” he said. “I haven’t heard my name on a tee in almost five months now. But I got off to a great start. I hit it right down the middle, hit a wedge and made a 5-footer for birdie on the first hole, so it kind of knocked all the nerves away and I started going out and playing golf.

“I figure this is a great way to knock the rust off and get things going. This is a perfect pre-tournament for next week.”