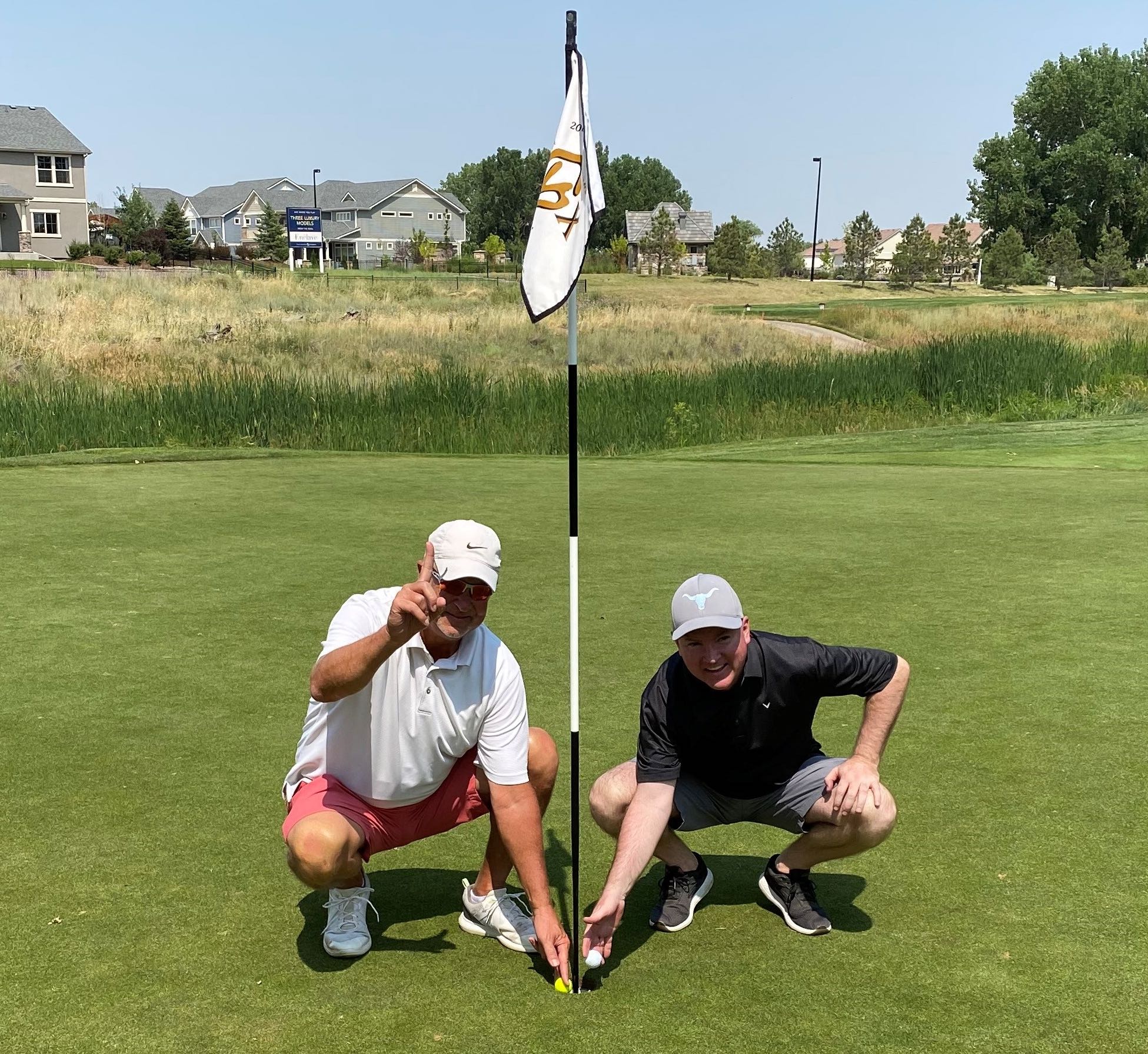 Holes-in-one are oddities to begin with, but in recent years, Colorado has taken things to another level regarding rare feats involving aces.

— In 2020 at Lakewood Country Club, Adam Nelson recorded two holes-in-one in a single round. The odds according to NHIOR? 67 million to 1.

— Also in 2020, at Green Valley Ranch’s par-3 course, Max Lange made two aces in the course of three holes.

— Then in May at Thorncreek Golf Course in Thornton, in a practice round for the CGA Senior Four-Ball Championship, John Hornbeck recorded a hole-in-one at No. 17, only to see playing partner Robin Bradbury drop it on top of his.

And now we have our latest chapter of this odds-defying story.

Last month — July 15 to be specific — at the championship course at Green Valley Ranch, Greg Lackey of Denver and John Sloop of St. Louis joined the double-ace parade.

Joining up with a couple of friends for an annual golf get-together that dates back to 1992, Lackey and Sloop not only each made the first hole-in-one of their lives, but they did it on the same hole, with their shots separated only by a tee shot from one of their buddies.

Playing the eighth hole at GVR, Lackey holed his from 156 yards with an 8-iron. Then after a playing partner hit his shot, Sloop proceeded to make his ace from 132 yards with a 9-iron.

Of course, there’s more to it than simply saying a couple of guys teed it up and whacked a ball into a hole. So let the principals involved take it from there.

“The marshal had just pulled up behind the hole,” Lackey said. “I hit and really didn’t think anything about it. I knew it was a decent shot for me. We couldn’t see the pin because it was kind of on the back side of that green. All of a sudden I see the marshal’s arms go up in the air.  I swear I didn’t think anything about it. I thought it might be close or something like that.

“The other guy got up and he hit. He hit one in there pretty close also. John was the last one to hit. All of a sudden we see the marshal’s arms go up in the air again. Neither one of us thought what had actually happened. We got in the carts and drove up there, thinking we’re close to the hole. When we got up there, the marshal was like, ‘Those are in the hole.’ No way. No way. Sure enough, John and I walked up there and that’s when they got the picture.”

Lackey laughingly notes that he and Sloop “have never agreed on anything”, but Sloop concurs for the most part with Lackey’s recollection of the event, with a small difference or two.

When Lackey hit his shot, “I thought it had a chance,” Sloop said. “When the marshal threw his arms up in the air, I look at him and said, ‘It’s in. It’s in.’ But Greg did not believe it until we actually got up there.

“Then when I hit mine and he threw his arms up in the air again, I thought, ‘OK. He’s just messing with us now.’ I was sure about his, but I wasn’t sure about mine until I got up there.”

So how did these two friends react to their double-ace feat — especially when neither had made a hole-in-one before?

“We were stunned,” Sloop said. “We’ve played four-day weekends for almost 30 years and in the group we’ve never had a hole-in-one and never seen one. And Greg and I had never had one in our lives. You throw all those things together, and I was stunned.

“And it lasted for a while. We both teed off with the balls on the next hole and I hit my second shot into the junk. That ball is still out there at Green Valley. But my partner said something to Greg before he hit so we took that one out of play and replaced it. That’s kind of how stunned we were.”

And one more thing about the scene at No. 8 that day:

“The other great thing about it was the cart girl pulled up in a timely fashion,” Lackey said. “Her timing was perfect. So we had a beer and we laughed. It was surreal.”

Lackey, who played basketball at Southern Mississippi, and Sloop met while both were assistant basketball coaches at St. Louis University in 1992.  Sloop jokes that they shared the smallest office in Division I basketball in history. In any case, every year since then, they and a couple of other buddies have met up each summer for a few days of playing golf.

Although Lackey is the only one of the group who lives in Colorado, their golf outings have taken place in the Centennial State for about the last two decades after being held previously in Beloit, Kan. — the hometown of Lackey and David Stover, another regular in the group. And, typically, the first round of those get-togethers take place at GVR, home of the CoBank Colorado Open Championships. Then it’s off to a couple of other courses.

“We lie to each other, we laugh, we have a beer and we play golf. That’s what we do,” said Lackey, a 63-year-old who’s a regular at Lone Tree Golf Club.

And, like many good friends, they aren’t afraid to needle one another. And that didn’t stop when Lackey and Sloop — who were on opposing teams — both made holes-in-one.

“What really upset me is I didn’t get the (tee) box on the next hole” after making an ace, Lackey said. “And guess who let me know about it too? (Sloop) did. All he did was trash talk all the way. He was still hitting first.”

One other amusing story to come out of the double aces:

“But it was surreal, and sharing it with John … I hate to say this, of all people because we’ve never agreed on anything. Finally we’ve got something we can go, ‘OK.’”

Lackey, who left coaching in 2004 when he resigned as a University of Denver assistant basketball coach, is now in the insurance business. He owns a USGA Handicap Index of about 10. Lackey, 53, works at a high school in St. Louis and helps coach softball and girls soccer. He plays golf to about a 12 handicap.

And for those wondering who won the team competition the day of the double aces, Lackey and Peter Piplica prevailed over Sloop and and Stover.

Guess that gives them bragging rights until next year, when the group will have plenty to reminisce about.