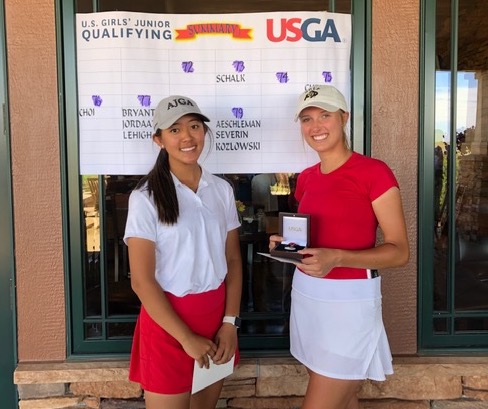 Hailey Schalk has long been one of the top girls golfers in Colorado, but when it came to qualifying for the U.S. Girls’ Junior Championship — arguably the top tournament for females in junior golf — the prize always seemed to elude her.

But on Monday, in her fourth attempt overall and her second at her home course of Colorado National Golf Club in Erie, Schalk hit the mark.

Schalk, winner of three girls state high school titles in as many tries while attending Holy Family, and Kaylee Chen of Greenwood Village landed the two available berths into the U.S. Girls’ Junior, which will be held July 22-27 at SentryWorld in Stevens Point, Wis. (The two are pictured above, with Chen at left.)

Schalk, a 17-year-old Erie resident whose dad, Matt, is the PGA general manager at Colorado National, earned medalist honors out of the original field of 21 by firing a 1-over-par 73. And Chen carded a 75. It’ll be the first U.S. Girls’ Junior for both players.

“I’ve wanted to qualify for this for a while now,” said Schalk, the 2017 Junior Golf Alliance of Colorado Girls Player of the Year. “Not qualifying three times in a row was frustrating. I’m glad I was able to pull through this time and play a good round. It’s really cool.”

Meanwhile, Chen was able to advance as a 15-year-old.

“It feels like all the hard work I’ve put in kind of paid off,” said the Cherry Creek High School sophomore-to-be.

Schalk, who will play her college golf at the University of Colorado beginning in the fall of 2020, actually shot one stroke better in qualifying last year at Colorado National, but missed advancing by two shots. This year, her two-birdie, three-bogey day was good for the top qualifying spot.

“It’s just nicer having it at your home course because you know it a lot better than just another random course, so that definitely was an advantage,” she said.

The highlight of the day for Schalk was almost acing the par-3 ninth hole as her tee shot ended up just inches from the cup for a tap-in birdie.

While this will be Schalk’s first U.S. Girls’ Junior, it won’t be her first USGA championship. Last year, she competed in the U.S. Women’s Amateur Four-Ball with Charlotte Hillary, and they advanced to match play.

“It was one of the favorite tournaments I’ve ever played in — if not the favorite,” Schalk said. “They treat you so well there. The competition is really good and the course is beautiful. It was an all-around good opportunity to play well.”

Coincidentally, it was while competing against Schalk that Chen made one of her biggest marks in golf to date. Last summer, Chen took Schalk to 23 holes before falling in the semifinals of the Colorado Junior Match Play.

On Monday, Chen rallied after a rough start to qualify for the national Girls’ Junior. She was 4 over par through five holes and shot a 5-over 41 on the front nine. But she was bogey-free on the back side while making birdie putts of 50 and 30 feet.

“The front nine was kind of rough for me, but I stayed with it,” Chen said. “I tried to have a positive mindset through the back nine because even though I had a rough front nine there were still nine holes to go.

Maxine Choi of Colorado Springs, the 2018 4A girls state high school champion, ended up as first alternate on Monday after posting a 4-over-par 76. Choi was even par through 13 holes, but went 4 over the rest of the way. Marie Jordaan of Greenwood Village was second alternate at 77.

Next year, the U.S. Girls’ Junior Championship will be held in Colorado, at Eisenhower Golf Club at the Air Force Academy.