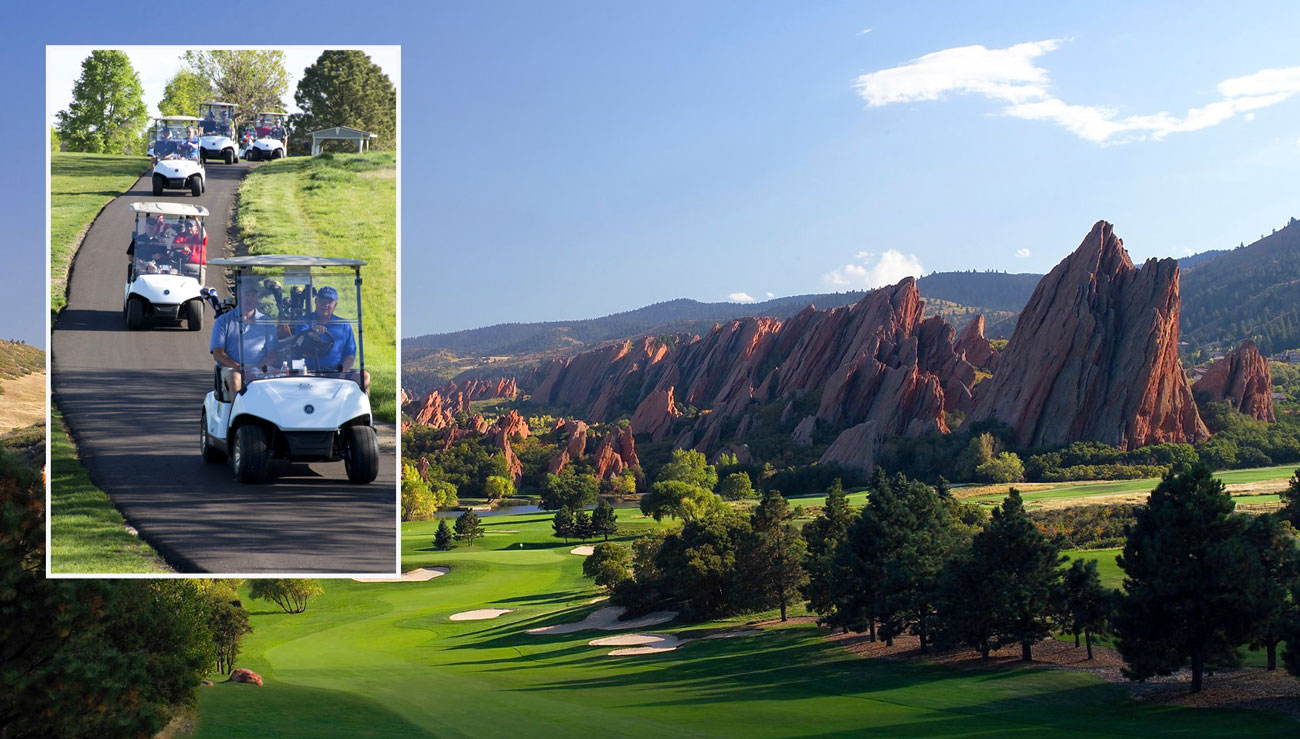 A CLOSER LOOK – The charity scramble makes a Colorado comeback

Charity golf tournaments are usually a hoot for us golfers. We get to play a scramble for giggles, receive logoed tchotchkes and savor a tasty spread with plenty of adult beverages.

But the pandemic of 2020 and the bounce-back of 2021 spotlighted the serious good that these events do for so many. Consider the 26-year-old Denver Cherry Creek Rotary Open, which is counted on annually to raise about $40,000 to fund a dental mission in Honduras, clothe immigrants in warm coats and dispatch “shelter boxes” to displaced families around the world, among other charitable endeavors.

“In 2020, we managed to keep the tournament going,” says organizer Jeffrey Maen. “But it was late. And we only had three months to put it together instead of six or seven. We managed to make only about half of what we usually do. And we only give money away as to what we raise. Fortunately, we bounced back in 2021 and went over $40,000 again.”

Rolling with the punches

Now flash forward to 2022, when golf courses are packed and private clubs have waiting lists. In Denver, where Marketing Director Leslie Wright says demand for outside events has heightened, City Park and Wellshire filled their allotted tournament times before the season started. So did Fossil Trace in Golden. “We’ve reduced the number of golf tournaments that we’re holding, just to open up space,” says Fossil Trace Director of Golf Jim Hajek. “And that’s become a theme throughout Denver.”

Private clubs, which traditionally close to members for Monday tournaments, are looking to cut back on events that bounce members off the fairways, and upscale public courses are struggling to balance the easy money of the everyday tee sheet against the extra work and staff required to facilitate charity tournaments.

Arrowhead Golf Club in Littleton continues to buck the trend, taking on an estimated 90 charity tournaments this year alone despite its status as one of the must-see destination courses of the Front Range. “Supporting local charities is part of our culture at Arrowhead,” says Senior Sales Director Kyle Bryant. “Being part of the Littleton/Denver community for 50 years now, we know we have to do our part to help those with great causes. Most charitable events start by 9 a.m., allowing us to tee off visitors from all over the globe each day in the afternoon. This model keeps the club busy daily for a four-month stretch in the summer.”

So much for the scramble-with-supper schedule of old. These days, participants can expect to get home by dinnertime.

“We have a great relationship with Bear Dance,” Maen says. “They’re very customer friendly. They’ve kept our expenses down. But we used to do our tournament on Thursday afternoon. Now they don’t want to have afternoon shotguns, and they want them earlier in the week. So this year we’re on a Tuesday morning, July 19.”

Maen expects to generate $40,000-plus again this year, supporting grants toward the Ukraine and Boulder fire victims as well as the usual causes. A roster of 27 charities hopes for triple that through summer golf tournaments at Sanctuary, which is open exclusively to charity events and has netted them more than a whopping $112 million over 24 seasons.

A unique model for fundraising

Head pro Rudy Zupetz hustled to get 20 of the 27 tournaments scheduled for 2020 onto the Sedalia course late that summer. “We rallied and had a pretty good year,” he remembers. “People couldn’t get in front of sponsors, but players were excited to get out again. And I think the people and companies who were doing well wanted to be very generous. Revenues were only down 10 percent.”

It was business as usual again in 2021 – as usual as that has been since REMAX chair and co-founder Dave Liniger came up with the unusual model in 1997.

“We were all a little surprised that first year, when Mr. Liniger invited 11 charities down and challenged them to net $100,000 on a one-day event,” recalls Zupetz. “Some of them did, and those are the ones he invited back. I was worried that after four or five years the novelty of this being the only way to play Sanctuary might wear off and these revenues would back up a little bit. But, over time, I’ve learned that there are a lot of successful companies who want to support these charities and are more than likely going to write them a check anyway. If they get an opportunity to come out here with three clients or three friends, it’s a win-win situation.”

Liniger is taking applications now for 2023 tournaments, and the requirements are stringent. Event hosts must have grossed at least $100,000 on a previous golf tournament, food and beverage minimum is $185 per player and auctioned foursomes require a minimum bid of $1,600.

In return, Sanctuary supports the charities’ marketing efforts. Visit sanctuarygolfcourse.com, and all 27 of this year’s tournaments are listed, with links to organizers so that anyone can sign up. Most golf courses, public and private, don’t have the time and staff to create that kind of public resource, so the Colorado Golf Association has launched its own listings of charity tournaments in the state, which can be found HERE. Golfers can visit the listings and see if there’s a charity they’d like to support or a course they’ve always wanted to play; tournament organizers can use the link to add their event to the listings.

So check it out, and maybe play a scramble for giggles, logoed tchotchkes, tasty food and adult beverages. You’ll take away a tax deduction and warm feeling.

A Closer Look, created by golf journalist and CGA member Susan Fornoff for the CGA Monthly, is the CGA’s on-the-course advisor on how to have more fun on the golf course. She deeply appreciates the experiences and relationships golf has brought her as she’s played everywhere from famed Cypress Point to a remote Scottish nine that had an honors collection box at check-in. Trust us, you don’t want to take swing lessons from Molly. But if you’ve got a question about etiquette, relationships or the culture of golf in Colorado, Molly will find the answer. Send your questions along HERE.